Alliance Coal’s Dotiki mine is one of the largest non-longwall underground coal mines in the U.S., and among the largest operators in the Common-wealth of Kentucky. Located near Providence, Ky., the mine has been producing low moisture, high sulfur coal since 1966 and today employs 440 miners.

The mine consists of five continuous miner sections and approximately 20 miles of underground conveyors that convey roughly 6 million tons per year (tpy). The seam height averages 60 inches and the belts consist of three ply rubber that run at speeds from 550 to 600 fpm.

Being a large coal producer, a sudden rip or break in a conveyor belt can easily cost the mine thousands of dollars in lost production. Because of the potential losses, Dotiki is always seeking better ways to avoid costly downtime. Flexco and Gooding Rubber have been working with Dotiki to find solutions to minimize downtime.

According to Dotiki’s Lead Belt Mechanic, Larry Stone, there were a few reasons new fastener installation options were being explored at Dotiki. “Not only were the miners looking for faster, simpler ways to install splices into the belts, but they were also looking for a solution to reduce the fatigue and stress the belt crews were experiencing with traditional manual methods of splice installation,” Stone said. He has been working with underground coal conveyors for 35 years.

For years, the Dotiki belt crews had been using a bolt hinged fastener system and wrench to install their splices—even in emergencies. In an effort to improve splice installation, they upgraded to Flexco’s SR Scalloped Edge fasteners. These fasteners use staggered pattern, multiple rivet attachments that pass between carcass fibers without severing them. The head of each pilot nail works in conjunction with the installation tool anvil plate to set the rivets. When the rivets are set, they compress the fastener plates into the belt covers and that provides a strong hold and distributes the splice tension evenly across the width of the belt.

A five prong drive and hammer were used to install the rivet into the fastener to complete the splice which relies heavily on manual labor. “Using a five prong drive and hammer can take 40 minutes per splice and can really wear you out,” Stone said. While struggling with daily splicing challenges, maintenance crews shared their concerns with Flexco representative, Mike O’Dowd, and Gooding Rubber representative, Tim Miller, who suggested trying a new type of power tool for installing belt splices.

This new power tool is called the Hilti DX 460-SR Powder Actuated Tool. It’s actually an MSHA-approved tool that is being used today quite successfully for many other applications in several underground mining operations. Working together, Hilti and Flexco developed a modified version Hilti DX 460-SR to work specifically with the Flexco SR belt riveting system. The DX 460-SR is a fully-automatic 0.27 caliber powder-actuated fastening tool with a power adjustment dial that offers finite control during the rivet setting process. The tool also has an automatic cartridge advance and piston return system for increased productivity. It eliminates the need for a hammer and can be easily adjusted to the correct power setting for the rivet size and belt type for installation.

Dotiki has found that the Hilti
DX 460-SR tool along with the Flexco SR fasteners, not only provides for a fast installation option for an emergency fix, but when regularly used for splice repair, substantially cuts the time and cost of routine belt splices. According to the belt maintenance crews, the time and cost savings is at least 50%.

“The Hilti tool is much faster time wise,” said Rick Robinson, belt man for Dotiki, a miner for 24 years. “I am able to install the fastener and pin in approximately 10 to 15 minutes. The old way would take me around 40 minutes. It is much faster and less stressful on my body; I’m not getting worn out anymore when installing a splice.” Also, Robinson adds, the R6 fasteners are lasting twice as long as the previously used Bolt Hinged 550s.  Mike Noffsinger, belt man for Dotiki with eight years experience as a miner, quickly agreed with Robinson and added, “with eight to nine splices a shift being installed, we are installing several thousand splices a year. This tool causes virtually no stress on the body.”

Robinson and Noffsinger say they  have definitely noticed an increase in productivity and less downtime. “When I’m in a confined space and need to install a splice, I don’t have enough room to swing a hammer,” Noffsinger said. “The Hilti tool is great because the tool barely leaves the guide block which is a huge advantage in these spaces.”

Dotiki participated in two training sessions for the Hilti/Flexco system where they were trained on how to install a Flexco belt splice using the DX 460-SR tool and a second training about the safe use of the Hilti powder actuated tool as required by MSHA. Stone said they have found that the Hilti DX 460-SR tool is easy to use and training on belt splicing and riveting is not difficult.

In fact, crews were so impressed by the time and cost savings from using the Hilti tool with the Flexco SR fasteners, they purchased 28 tools for all three shifts. Stone says it was well worth it.

Bargo is the product engineering manager for Flexco, which is based in Downers Grove, Ill. (www.flexco.com) 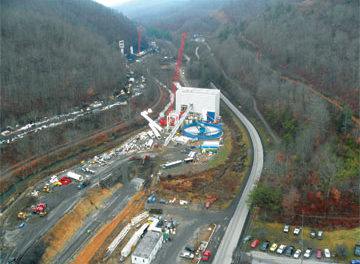