Lately dragline operators have raised concerns over existing ventilation systems used on dragline machine houses. The ventilation systems were seen as inefficient at filtering dust from outside, causing problems with communication, damage to electronics equipment, and a health hazard to operators. Long term dust levels and the effectiveness of the filtration systems had not been measured and adequately reported, according to a team from BMT WBM, a mining consulting firm based in Brisbane, Australia.

To provide an accurate measure of the effectiveness of the more common filtration systems, and to provide recommendations for improvement, the company’s associate Bruce Manser and senior mechanical engineer Mike Costello conducted a detailed field test program. The program aimed to measure characteristic airflow parameters, dust fallout rates and dust concentrations both inside and outside the machine house, on four draglines and one shovel. The airflow parameters measured included volume flow rates, velocities, house pressurization and pressure drops throughout the flow path.

The test program was based on a study completed by BMT WBM earlier this year, which focused on how the air flowed through the machine house of a typical dragline, as well as the air velocities around heat generating equipment and the effectiveness of the air in carrying heat away from that equipment. The study involved site work to measure airflows and temperatures, and computational fluid dynamics (CFD) simulations of the air flowing from the ventilation fans situated on the roof of the dragline, into the machine house, over and around gearboxes and the MG sets as well as through the electric motors on swing, hoist and drag. The study provided sufficient understanding of the filtration systems on various draglines to allow the test program to focus on dust control.

In the most common filtration systems, air supplied into the machine house from the fan units on the roof is passed through a bank of inertial filters, typically one of the commercially available products, such as Dynavanes or Floseps. Inertial separation occurs when the dust is separated from the air due to its higher mass, which makes it more resistant than the air to changes in the main airflow direction. The filtration module may be placed in a duct, or it may be positioned in a wall of a building to act as an entry or discharge louvre with dust filtration capability. The orientation of the elements in the module can be such that the air travels either horizontally or vertically through the module.

According to BMT WBM, most draglines in Australia are fitted with Dynavanes, although at least one dragline has Floseps.

While Dynavane elements have been regarded and marketed as self-cleaning, site experience has shown that some periodic cleaning was essential to maintain good performance.

Long-Term Dust Readings
In the test program the BMT WBM team installed dust deposition gauges on five machines—four draglines and one shovel. Dust fallout rates in g/m2/day or mg/m2/day were determined on a monthly basis for outside as well as inside the machine house and in the filter room. For each dragline, about 16 gauges were used over the three different areas and the mean and standard deviation were used to characterize the dust fallout rates for each. Fewer deposition gauges were used on the shovel due to its smaller size.

Inside the dragline houses the dust fallout rates were found to be typically 0.5 g/m2/day, up to about 4.2 g/m2/day. Those values again exceeded the Queensland EPA and NSW DECCW criteria for residential receptor locations adjacent to mines. Most of the samples also exceeded the SANS “action level for industrial areas” of 1.2 g/m2/day.

Instantaneous Dust Readings
In the test program, short-term instantaneous concentrations were measured using a hand-held monitor, mainly to detect concentrations in the small diameter (<10μm) particle range. The monitor requires low detection limits to allow quantification of dust particles down to 1μm, since these small diameter particles pose the highest risk to human health. The device employed in the test program used a laser nephelometer to determine concentrations. A nephelometer works on the principle of narrow angle forward light scattering to identify particles of varying shapes and colors. As a particle enters the laser light beam, a photo detector, located at a narrow angle to the path of the beam, measures the diffraction and refraction of the scattered light to determine the particle size. The particles are counted over a set time frame to determine the overall concentration. The BMT WBM team used the “Dustmate” from Turnkey Instru-ments, which is capable of detecting particles down to 0.5μm and concentrations down to 0.01μg/m3.

The relative importance of fine and coarse dust content was inferred from simultaneous readings of both Total Suspended Particulate Matter (TSP) and PM10 levels (PM10 refers to particulate matter with less than 10μm diameter). For very fine particles that may penetrate the lungs, a direct measure of the PM2.5 was used.

For the majority of the machines the dust levels recorded over all size ranges in the operator’s cab were lower than in the outside air, typically 0.1 to 0.5 of the outside levels. In some instances, however, the levels inside the cab and outside were comparable in the PM2.5 and PM1.0 size fraction. The measured dust fallout rates over one month were always lower inside the machine house than outside.

Personal exposure levels within the house for TSP, PM10, PM2.5 and PM1.0 were well within the limits specified by the Australian NOHSC (National Occupational Health and Safety Commission) for a 12-hour working shift for the locations and times when monitoring was undertaken. However, PM10 levels on all machines indicated that the Queensland EPA 24-hour requirement of 150μg/m3 and the Australian NEPM 24-hour requirement of 50 μg/m3 for acceptable air quality in towns and cities would be often exceeded.

Ventilation and Filtration System Performance Comparison
For outside dust fallout rates of about 20 g/m3/day or more, the Dynavane M8050 with OEM filtration system exhibited significantly higher overall filtration efficiencies, typically 95%, compared with other draglines, usually less that 88%. The machines with the lowest overall dust filtration efficiency were the ones using the Flosep system and a M8750 Dynavane system installed upstream from the fan. However, the M8750 performed best in the removal of fine particles (PM2.5 and PM1.0).

While it would appear that more frequent maintenance and cleaning would increase the overall filtration performance, the team noted that the systems could be susceptible to repeat clogging in a short time and that would require a frequency of cleaning and maintenance probably greater than most sites would wish to implement.

Based on the test results from all draglines with Dynavane filters, the team believes that maintaining the Dynavanes clean and ensuring an adequate scavenge flow are critical for good dust filtration performance. Dust extraction efficiency also appears to improve slightly with increasing dust load, possibly due to agglomeration of particles which can then be more effectively removed.

Based on the research undertaken during the test project, the company offered the following recommendations:

Air entry and filter cleaning
•    In machines where the intake velocity at the protective mesh was kept below 5 m/s, there were minimal problems with moth and debris build-up on the mesh.
•    If the intake mesh is well separated from the intake plane of the filters, it is much easier to clean and maintain both the intake mesh and the filter elements.
•    BMT WBM has proposed a modification to the hood to provide better shielding against rain and better access for cleaning of both the Dynavane filters and the mesh. It has also proposed a few quick release alternative fixing methods for the protective mesh and a cleaning nozzle to remove debris from the end slots of the Dynavanes.
•    The narrowness of the last slot between the Dynavane blades and central dividing plate—critical for directing the “dirty air” into the collector channel and scavenge system—seems to cause the Dynavanes to be particularly susceptible to loss of filtration performance as these slots become clogged with moths. BMT WBM has suggested an investigation to establish whether adequate filtration performance can be achieved with a wider slot that is less susceptible to blockage. Possible modifications to increase the slot width might include trimming the divider plate about 20 mm back from the end slot or changing the angle of installation of the blade packs.
•    The Flosep filters have apparently provided less effective filtration than Dynavanes, although the technical datasheets for those products suggest Floseps should provide better results. The BMT WBM team said this appears to be primarily due to the protective mesh and the Floseps becoming heavily blocked by moths, especially since the Floseps used to date are only nominally 18mm in diameter. If a larger Flosep—maybe of 50 mm to 100 mm diameter—were used, there may be no need for a protective mesh since the moths would then be passed directly through the Floseps tubes and into the scavenge system.

Scavenge system
•    A much higher level of priority should be assigned to ensuring that scavenge fans/motors are repaired or replaced fairly frequently. It seems that about half the failures of the axial in-line scavenge fans that are contributing to poor dust filtration performance are due to failed electric motors that never get replaced within a reasonable time frame.
•    To improve access to the scavenge fans and motors, backward curved or radial bladed centrifugal fans running at a relatively slow speed should be used in preference to the axial fans.

Mechanical maintenance
•    Belt drives, used on some draglines, are maintenance intensive. Some mine personnel are contemplating direct driven DOL drives on the main house ventilation fans.
•    House pressurization varied significantly among the machines. On some machines there were periods when the interior of the house was under suction rather than pressure. On the Bucyrus 2570WS, where exhaust fans are fitted to the discharge louvres, the house pressure frequently below atmospheric during the swing cycle, if there was any blockage of the Floseps filters or intake mesh.

Baghouse/Cartridge Design Alternatives
During the test program, several baghouse options were investigated, to establish whether there was a possible design layout that might fit on the roof of a dragline. The team decided that a baghouse option following a traditional layout was feasible. However, it would be quite tall (around 8 m) with a significantly sized footprint on the roof. To reduce that footprint, it seems that a viable design would need to adopt axial rather than centrifugal fans. To reduce the height, it would be preferable to revert to an arrangement using “cartridges” rather than bags. BMT WBM believes that the technology most likely to achieve a high filtration efficiency, both for larger and very small particles, and improved system reliability for dragline house ventilation, will involve cartridge technology.

The company has concluded that it is possible for dragline operators to achieve improved dust filtration performance simply by implementing a stricter regimen for cleaning the filtration elements, by making some changes to assist the cleaning, and by regularly removing dust build-up from within the filter rooms.

Author Information
Grad is a freelance writer based in Sydney, Australia. He can be reached at: +61 2 9969 2877 or E-mail: silvio.silvio@live.com.au. 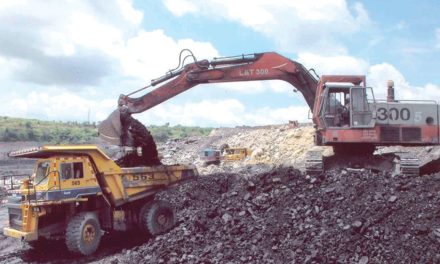