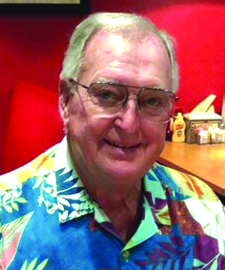 Richard Clayton “Moon” Mullins, 82, passed away Monday, June 6, 2022. He grew up in Bluefield, West Virginia, and after graduating from Bluefield High School in 1958, he earned an associate’s degree from Bluefield State College. After college, Moon served two years in the U.S. Navy. Moon worked for more than 40 years in the mining industry. His mining machinery career began with Galis Electric Machine in 1963. From there he held roles with both Goodman Mining Co. and Fairchild Equipment International. In 1968, he joined Joy Manufacturing. While working with Joy as regional manager for the Western Region, he and his family relocated to Price, Utah. In 1987, Moon and his family returned to the East Coast. Over the years, Moon held a variety of different positions with Joy but when interviewed at his retirement, he said of his position as regional manager, “Joy didn’t know it, but I would have paid them to let me do that job.” Over the years he saw and worked just about everywhere there was underground mining in the world. He retired from his role as vice president product manager of Joy Mining Machinery in 2006. Over his career, he was active in several industry organizations, including the King Coal Club, Old Timers Club and the West Virginia Coal Mine Institute where he served in a number of capacities, including past president and member of the board of directors. Moon also served on the board of directors of the West Virginia Coal Association. In 2007, he was inducted into the West Virginia Coal Hall of Fame.