The year was 1984, and a small Pennsyl-vania mine service company was introducing to the mining community a new technique to get power to shaft mines without armor. While mines wanted the toughness of the armored cable, they did not want the higher costs involved, instead turning to neoprene-jacketed mine power feeder (MPF) cable.

Because MPF cable would not need to be laid out prior to being sent underground via borehole, the question then would inherently come: how could crews efficiently install the line without damage? At this time, when damage did occur, cables were typically not readily available — meaning the site would need to wait weeks for delivery, or lay out potentially unnecessary capital in advance for what might occur.

Anyone who has ever been tasked with installing power cables, especially the highly robust versions typically used in today’s underground operations, knows the time, labor, headache and cost that goes into it.

Bob Kadyk, who at that time in the 1980s was serving as a sales manager for J.H Service, is now R.C. Kadyk Corp.’s owner and president. Watching the evolution of mining cable design and repair has given both he and the company interesting insight into the borehole services and products and repair services the group is now known for, particularly in the eastern U.S.

When approached by a mining operation about the increasingly heavy cable, greater power need and line voltages that had grown exponentially — issues Kadyk had already been watching with vigilance — his brainchild began to take shape and he developed the first multipoint system using standard neoprene MPF-jacketed cables.

Because many of today’s cables are still neoprene jacketed, making them much more flexible and lighter, it was not that aspect of the process that needed fine-tuning, it was how to properly support them and their weight. The development of 100-ft interval grips, each woven into the line with its own wire rope, did work for a while; the popularity of longwall mining and longer faces changed that entirely. Voltage capacities previously in the 5- to 8-kv range rose to a now-average 15 kv, and weights, of course, increased parallel to that.

Over time, another contractor developed a sleeker, more advanced single-point system. At that point in the 1990s, R.C. Kadyk’s thriving business focused on the new cable sales and cable repair side of the industry; as a result, he opted not to continue his involvement in borehole installations and retrievals. 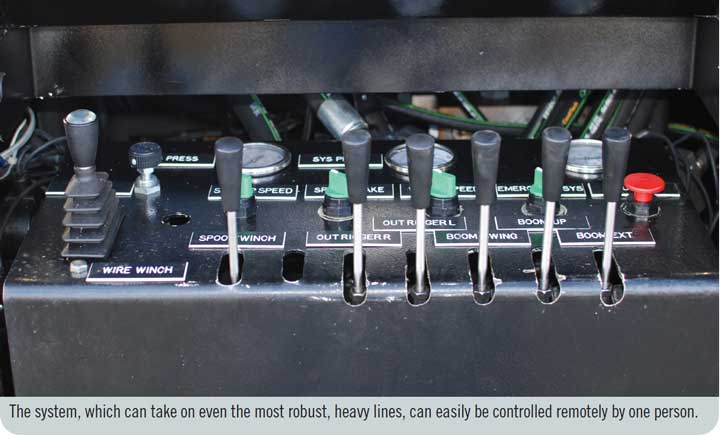 In the spring of 2015, with R.C. Kadyk in need of a new truck, the executive put his thoughts into fruition taking what was a basic single-point system developed 20 years before and putting the principle “on steroids,” as he now says, by advancing the hydraulics for dealing with increasing weights and depths of borehole implementations and improving upon the system’s design from the older trucks in his fleet.

Working alongside a winch-lowering and lifting partner and hydraulic engineers and with just a chassis and cab in hand at the start of the project in May 2015, work moved along quickly and a new single-point hydraulic system and truck were ready for use in last November. 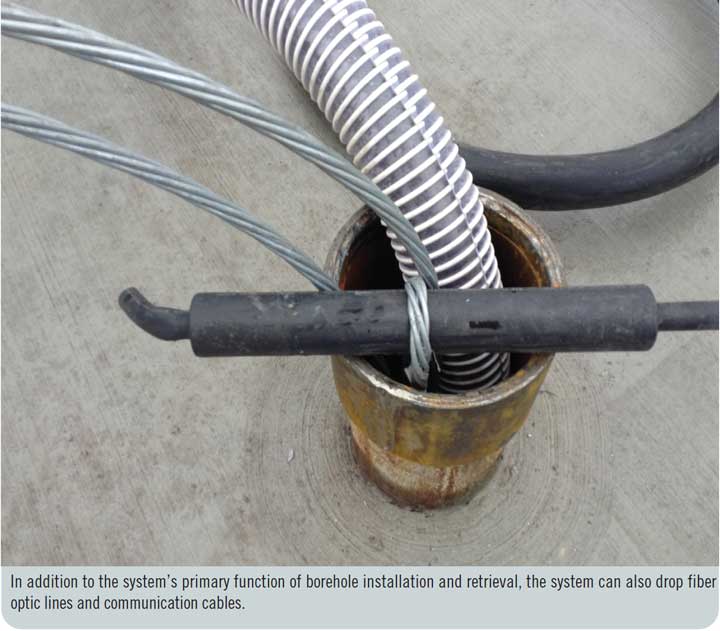 Kadyk, noting that interest in his system has gained national interest, said the primary benefits are a minimal mobilization time and a much smaller call for personnel resources.

“If a mine called and says it is down, we think within eight hours we could have everything ready for them,” he said, adding that the company stocks a large, diverse amount of cable at any given time. “That’s a tremendous difference from before — it took a day just to get the truck ready.”

The truck, the first in what Kadyk said will eventually be a growing fleet, can travel from interstate highways to secondary roads to gravel locations easily, and once on-site there is nearly no setup time needed. Unlike the small crowd of people needed for yesterday’s multipoint system of wire ropes and associated work, the process is now a three-person job: a foreman, a pilot and a co-pilot.

“The main winch is capable of handling 20,000 pounds,” Kadyk said. “The main drum on truck itself has a 10,000-lb lifting and lowering capacity; two of them work together by one operator with a joystick. Once it starts, then gravity takes over…it senses how fast the winch is going and automatically adjusts to keep up with that.”

Once a single operator gets the line near the bottom, the surface team can communicate with mine personnel to be prepared to receive it. “That’s it,” he said. “No need for [additional] help at the surface.”

In a true testament of its efficiency, the company recently achieved a complete installation — from backing up its truck to completion of a borehole installation — in 1 hour and 36 minutes for a 1,000-ft cable weighing 9,600 lb.

In addition to the system’s primary function, borehole installation and retrieval (including slope cable and wire ropes), the company can also use the truck to drop fiber optic lines and communication cables. Additionally, it can easily drop slick line for other weighty materials such as gunnite and rock dusting materials.

Should an emergency arise at a mine, Kadyk noted that the boom on the back of the truck — which is both articulating and hydraulic and extends up to 15 ft — could be used for lowering emergency supplies by simply positioning the boom atop the shaft.

“It’s not approved for mine rescue of people, but if someone was in trouble, we could lower a basket to assist in a rescue, or at least drop supplies,” he said.

News of the truck traveled quickly once it was in service; the company booked five cable installations within two weeks once it was added to the fleet. Another four were in process at press time. In a time when the market dictates the future of many suppliers and service providers, it has created a positive turn for R.C. Kadyk, which simply put resources and ideas it already had into motion for the mining industry and others in the Pennsylvania/Ohio/West Virginia region and beyond. 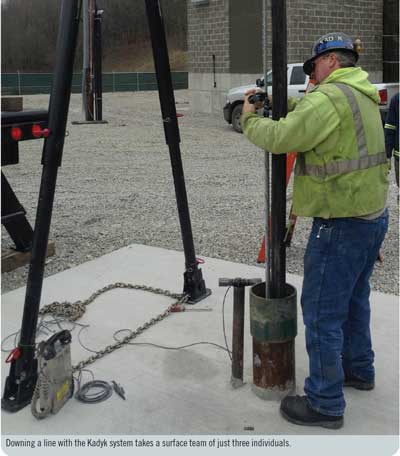 The system can work efficiently with all types of cable in what Kadyk described as a turnkey operation for borehole installations and retrievals. The company is involved from beginning to end, from supplying new cable and material to vulcanizing grips and preparing the line, installation and integration and startup of all electrical components. A post-installation test can confirm that all is intact and ready for use.

Looking back on progress to today, Kadyk said he has no regrets in bringing his ideas to life.

While he is eyeing a fleet expansion and hopes to take on some national challenges with the system, such as western mines, for now there will not be another truck just like the first. Among his ideas for the next addition is a track-based unit haulable by trailer. For now, Kadyk said, baby steps.

“If the industry was not sluggish, may not have decided to do this. But I’m glad we did.”

To see the R.C. Kadyk system in action, visit http://youtu.be/lcBAejVsz1g.

Railroad Performance: A Quick Look at a Few Railroad Measures 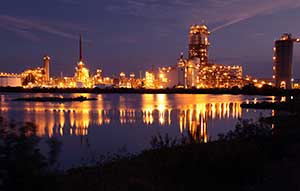