The Dry Fork mine is a surface coal mine located in the Powder River Basin (PRB) approximately 7 miles northeast of Gillette, Wyo., on Garner Lake Road. The mine was constructed in 1989 and began commercial operation in 1990. About 70 employees work in the mine, which is well known for its safety and environmental achievements. In 2009, the mine celebrated having gone nearly seven consecutive years without a lost time injury, and it recently received three prestigious environmental awards including the Office of Surface Mining Excellence in Surface Mining Award, the Wyoming Game, Fish Industry Reclamation and Wildlife Stewardship Award, and an Excellence in Surface Coal Mining from the Wyoming Department of Land Quality.

Western Fuels-Wyoming, Inc. is owned by a collective of cooperative power companies. The mine primarily supplies coal to the utilities associated with those rural cooperatives. Dry Fork is an industry showcase representing how mining, energy production and nature can realize sustainable success. Dry Fork practices balance between conservation and mining. It is a 24/7 operation at the heart of the PRB and is scheduled to produce an estimated 5 to 6 million tons of coal annually, of which 1.5 to 2 million tons will be used in the new Dry Fork Station, a 385 megawatt power plant, located adjacent to the mine.

The Dry Fork mine is a truck and loader operation with Le Tourneau 1850 and 1400 loaders and Cat 793D 240-ton and 789B 190-ton haul trucks. The drilling is done with a new Atlas Copco DML blasthole rig with the new Atlas Copco Grizzly Paw 10.625-inch bit. In the past, the mine drilled 9-inch holes with an older drill, but with the new DML, operators were able to increase hole size, allowing them to expand their pattern by nearly 30%.

As Good as New
Every element is part of the reclamation plan. Animals, trees, surface rocks—it is all documented in the permitting process. “It’s a constantly evolving permit,” said Director of Regulatory Affairs Beth Goodnough. “Currently it’s 25 volumes long and growing.

“We make efforts to replace wildlife micro habitat impacted by mining by replacing shrubs, building rock piles, planting trees and bushes, and installing rock and bluff type ledges in the reclamation,” Goodnough said. “The permit requires us to restore one shrub per square meter on 20% of the reclamation. The seed mixes are rather complicated and include the Wyoming big sagebrush, silver sagebrush and a variety of native grasses and forbs. The mixes are tailored to grassland areas, wetlands, bottomlands, shrub patches and mixed sagebrush/grassland post mine areas.”

To support habitat, rock outcrops are also replaced where the integrity of the rock makes it possible. Another recently constructed feature is a 4-acre alluvial valley floor that was recreated in a reclaimed area to look similar to the one that had been present prior to mining. In another area, the mine has succeeded in establishing a wetlands channel and has three restored wetlands ponds.

In addition to reclamation, all climate and subterrestrial elements are examined and monitored.

“Wetlands, hydrology, air quality, climatology, archeology, wildlife—everything is monitored, documented and reported monthly or annually. I see different inspectors once or twice a month, federal and state. We have a variety of folks with different focuses watching what we do,” said Goodnough. As for how close reclamation efforts are to pre-mining conditions, Goodnough said, “We’re trying to do in 10 years what it took nature hundreds of years of evolution to accomplish.”

In total, the mine manages approximately 10,000 acres of land. Of the mined area, nearly 20% of what has been disturbed has been reclaimed to what it was, before any mining activity. Goodnough said the goal is to restore disturbed land right behind mined land. “We want a 1 to 1 ratio as we go forward, an acre reclaimed for an acre disturbed,” she said. Dry Fork isn’t alone in its efforts to keep the PRB sustainable. The region is known for following thorough reclamation processes.

The Right Machine
The DML is a new drill for Dry Fork, but “it didn’t take but a couple weeks to get comfortable with the controls. I like the carousel system. It’s very user friendly. There are good safety features on this rig, too, keeping you from screwing up,” said Drill Operator Mark Lindsey.

Lindsey thinks the drill has “lots of air power and drills fast overall.” The DML is outfitted with a 1900 cfm air compressor. “I wasn’t too sure I’d like the GPS, but now I’m spoiled because the depth is always right on the money. Now I really like it,” he said.

“It’s an advantage with the larger diameter hole because we don’t have to shoot daily,” said Mine Superintendent John Barnes. He likes that the driller can be doing other things and they can stay ahead. Each blast usually requires 35 to 40 holes. When overburden is less than 30 ft, they drill vertical holes. Deeper than 30 ft and they drill on a 20˚ angle. The overburden is generally 60 ft deep. “The Grizzly Paw bit performs well when drilling through rock,” said Barnes. The drill’s penetration rate is typically around 25 to 32 ft/minute.

Dry Fork is toward the north end of the PRB and produces higher moisture, low sulfur, subbituminous coal at 8,000 to 8,200 Btu/lb. The mine has two pits with coal of different properties, which allows the mine to mix loads to a power plant’s specifications. Coal depth is a varying factor in the PRB region. This makes reclamation a bit more difficult too. “We map everything to ensure post-mining contours coincide with pre-mining elevations. This includes setting topsoil aside during initial excavation so it can be replaced after reclamation. Basically the reclaimed land will look just like it does before, just lower because the coal has been removed,” said Barnes.

The coal in this part of the Powder River Basin exists in two layers. “The coal deposits came in two events,” said Barnes.

The mineable Anderson layer is on top, which is about 18 ft thick, and the lower Canyon deposit is generally 55 ft thick. A sedimentary stratum about 2 m thick separates the two coal seams. When drilling in coal, “The Grizzly bit drills like a hot knife in butter and it’s easy drilling. It won’t plug up either,” said Lindsey. When drill hole depths allow, both overburden and coal are drilled in a staggered pattern at a 20˚ angle.

To be successful here, a mine has to employ efficient and intelligent people and equipment. Getting the coal is just part of a process that ends in reclaimed land…where the deer and the antelope will continue to play.

The Grizzly is Making a Comeback in Wyoming

Atlas Copco has developed a new drill bit specifically for softer overburden in geology like that of Wyoming’s Powder River Basin (PRB). For two years engineers, rock tool technicians, machinists, drillers and customers worked together on a bit that would increase productivity in the consolidated sandstone formation that is infused with hard igneous boulders.

Traditionally, the most successful bit in the region has been a bit with hardened carbide teeth. However, when harder rock is encountered, a tricone may be needed to penetrate the formation. The Atlas Copco Secoroc Grizzly Paw bit allows the driller to penetrate glacial till and overburden to the coal seam.

The Grizzly Paw has evolved over nine generations in the last two years. It started out as a sketch on a napkin from Elko Senior Area Manager Jim Wheeler. He knew what he wanted and sat down with engineers to start the process. With the help of computers and programmable logic controls, the angle of the teeth and placement of air holes were moved and adjusted until they were just right.

“There is more to this bit than one would think. This is high tech. At one time we overcorrected a full degree on the tooth angle and the bit didn’t cut. This is the best formula for long-term wear and aggressive cutting,” said Atlas Copco Product Manager Rob Fournier.

Atlas Copco Rock Drilling Tools Specialist Walt Schroeder has been working with customers in the PRB to test the bit in the varying formations and on different rigs. “We’ve found the higher the RPM the more aggressive the bit will cut. It took a really fancy machine to make this bit just right,” he said.

Schroeder pointed out that it takes a different mindset when purchasing this bit; it has to be looked at based on cost per foot. “I will guarantee the Grizzly for 200,000 ft. You can’t do that with other bits,” he said.

A driller with 22 years’ experience who tested the bit said, “I hope we never have to use the old bit again.”

This mine drills with an Atlas Copco DMM3 with 2,600 cfm. He says at his mine they insert a choke above the bit to keep the pressure up, but he knows others in the area don’t do this. “We go deep and like to keep the pressure between 50 and 60 psi and the choke will help with that.” He said keeping the pressure up also keeps the compressor from heating up. Overburden at his mine requires drilling nearly 190 ft of hole depth with 12 1/4- and 10 5/8- inch diameter bits.

On the current bit they have drilled 375,000 feet using 14 buckets of teeth. This life-on-bit is not possible throughout the mine as other areas have more abrasive rock. “200,000 ft drilled is no problem, but every situation after that is different,” said Schroeder.

The mine’s drill and blast foreman said other bits require more weight on bit too. “When you don’t have to apply as much weight on bit, wear is reduced. Our old bits could go through as much as a bucket a day.” He said there are benefits to other departments in the mine. “Maintenance is not my area, and it’s hard to quantify, but I can tell you maintenance is less, too, because I don’t have to push the drill as hard.”

The driller agreed with the D&B foreman, “It saves on cables and cylinders. It has to.” He said he averaged weight-on bit at 9,000 lb when drilling with the Grizzly Paw versus 12,000 lb with the bit he was using before. With the other bit, “I have to check the teeth after every hole. With the Grizzly Paw I check every other hole unless I’m drilling in more abrasive sandy areas,” the driller said. An average 12-hour shift drills 15 to 16 holes or 3,000 ft. “I can get 20 holes, but I want the rig working for the next guy,” he said.

The D&B foreman said the most noticeable result of going with the Grizzly Paw bit is consistency. “Driller to driller everyone has a different skill level. This bit is more forgiving and equalizes the less skilled drillers with those with more experience.” With the increased footage on each bit, greater penetration rates and lower maintenance costs, he said the bottom line is the biggest benefit: “Overall my cost per foot is down, way down.” 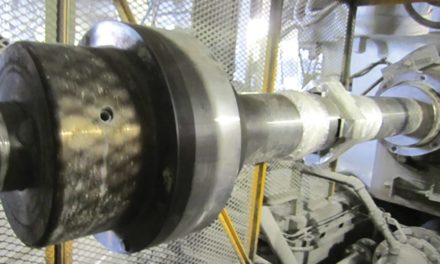 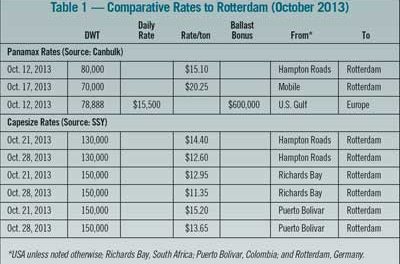