On September 27, the Eurasia Development Bank (EDB) issued a report stating that in the first half of 2016, the combined coal production of participating countries (Russia, Kazakhstan, Armenia, Tajikistan and Kyrgyzstan) reached 232 million metric tons (mt), a 20-year high. However, regional growth was uneven and was primarily driven by Russian miners.

Following global trends, from 2011 to 2015, coal prices fell in Central Asia, hitting the bottom at the end of 2015 and early 2016. By mid-2016, they rose slightly. Most forecasts suggest weak or negligible price growth for the region, EDB said. In response, the coal industry is growing in Tajikistan and Kyrgyzstan, and in the near future, mining is expected to begin in Armenia and Belarus, EDB added.

A similar situation was observed in Uzbekistan, where in 2013, the government approved an investment program valued at $500 million. The main target was to increase production from 3.8 million mt to 5.1 million mt in 2016, to nearly 18 million mt in 2020. Nonetheless, in 2015, production was 4.4 million mt, and there were no new, large projects launched.

Conversely, in Tajikistan, the coal industry is booming. In 2010, production hit 300,000 mt with no plans for an increase. In 2016, according to most forecasts, output will reach 1.8 million mt or more. According to the Energy Ministry, the main cause of the boom is low prices, which incentivizes companies, power plants and citizens to choose coal over natural gas.

Kyrgyzstan also reported coal mining growth. According to official reports, in the past 10 years, production rose 500% to 1.9 million mt. The government applied an import-substitution policy starting in 2007, and, according to the Fuel-Energy Complex Development Program, domestic coal consumption should increase until 2025.

For Tajikistan, Kyrgyzstan, Uzbekistan, Armenia and Georgia, coal is an issue of not only economic security but also political stability. All more or less depend on fuel and energy imports from Russia and Kazakhstan.

The tactic of using energy, both natural gas and coal, to leverage negotiations on various political issues is referred to regionally as the “energy needle.” The idea of beating the needle is pursued by leaders of Central Asian countries. With turbulence in the region over the situation in the Ukraine, energy independence seems more important than ever before, and it may become the driving force behind more development of coal.

The coal market in Tajikistan, Uzbekistan and Kyrgyzstan largely differs from that of Kazakhstan or Russia, primarily due to private consumption driving a portion of overall demand.

In recent years, Uzbekistan launched 31 coal briquetting factories with the annual capacity at 240,000 mt per year. They sell coal pellets to households at the solid rate of $89 per mt. Meanwhile, Uzbekistan has been steadily decreasing the production of natural gas from 59.1 billion cubic meters (m3) in 2011 to 55 billion m3. Statistical information on natural gas production is not available for 2013 and the end of 2015 brought supply interruptions.

According to the plans of the Uzbek government, coal should partly replace gas for energy generation. There is a huge potential for coal use, both in the public and private sector. According to some estimations, about 15-20% of citizens still use wood pellets and kizak (pressed, dried dung) for heating fuel. A similar situation is observed in Tajikistan and Kyrgyzstan, as energy infrastructure is not well-developed. 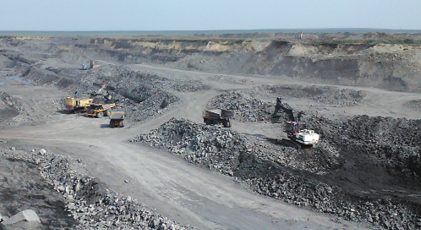 Most coal in Kazakhstan is produced with open-pit mining. (Photo courtesy of Energy Ministry Kazakhstan)

As was declared in 2013, major investment projects for the Uzbek coal industry include modernization of Shargunkumir, with production growth from 130,000 mt to 900,000 mt, and the second phase of modernization of the Angren field, with potential growth of production from 3.2 million mt to 6.4 million mt. However, so far none of this has been implemented. 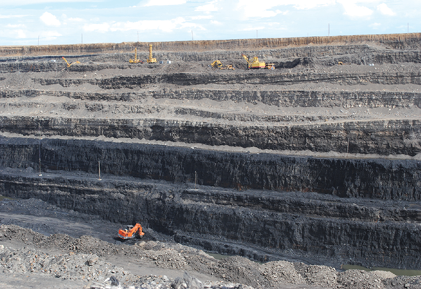 A real breakthrough in terms of coal production has been made in Tajikistan. It has overall reserves of 4 billion mt, and, at the moment, 18 companies are developing 14 coalfields. The largest one is the Phan-Yagnob mine — it produces nearly 60% of the country’s coal. Approximately 82% of the coal in Tajikistan is produced by state-owned companies.

According to the Tajik Ministry of Energy and New Technologies, in 2014, the country stopped importing natural gas as most customers and industrial facilities shifted to coal. For example, Tajikistan aluminium plant in 2012 commissioned an installation for the processing of energy coal into gas. Also, dependence on gas was further nixed due to the launch of the Dushanbe-2 thermal power plant near the country’s capital.

According to the press service of the ministry, the recent forecast for coal production in 2016 was raised from 1.7 million mt to 1.8 million mt. As a result, this year’s level of national self-sufficiency in coal should hit 88%, compared to only 20% five years ago. All in all, Tajikistan showed the highest pace of industry growth, increasing the volume of production nine times since 2010 (when it was at only 200,000 mt).

Strong development of the coal industry was furthered with the adoption of two bills: the law “on coal” from early 2012 and the 2013 legislative ban on the export of coal. The former sought to make the industry transparent, and increased its investment attractiveness. The latter, although it was canceled a year later when the country joined the WTO, sought balance between demand and supply.

Most output growth was provided by the open-pit Phan-Yagnob mine, which in the last two years increased production from 300,000 mt to 1.2 million mt.

Current annual coal demand is roughly 2 million mt, including 1.6 million mt for North Kyrgyzstan and 0.4 million mt for South Kyrgyzstan. The southern part of the country is self-sufficient, while the north, over recent years, still has to import, primarily for the Bishkek thermal power plant, with an annual demand of 850,000 mt.

Despite a huge potential, the industry still has a lot of problems, including the extremely high level of deterioration of production assets, which according to some estimates reaches 95%. Most mine and open pits were established 40-50 years ago and still use 20th century equipment, reducing efficiency and increasing costs.

However, in recent years, there has been some progress in this area. In 2013, state-owned company Kyrgyzkomur, which accounts for almost all coal mining in the country, entered into an agreement with Australian Posit Coal Pty Ltd. for the joint development of Kara-Keche deposit. Also, Kyrgyzkomur has signed a memorandum on the quality system management for Mine Reclamation Corp., with the main goal of improving industry efficiency nationwide.

According to a forecast by the Russian Institute for Energy Studies, within several years, due to numerous projects, the industry may reach an output level of 4 million mt. However, this will require development of transportation infrastructure, specifically construction of the railroad branch Jalal-Abad–Torugart. As a result, the country might become a net exporter of coal, supplying up to 2 million mt to Europe and China, forecasts suggest. 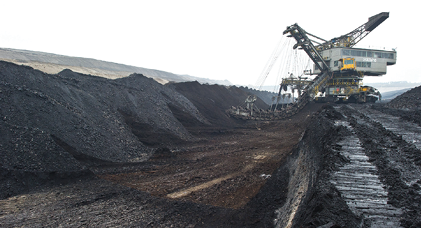 Bogatyr is one of the largest coal mines in the world. (Photo courtesy of Bogatyr Komir)

Kazakhstan coal industry faces a protracted fall in both production and exports due to international events and the reduction of consumption by Russian thermal power plants, as well as the reduction of mining profitability, EDB reported.

Russia accounts for 77% of Kazakhstan’s coal exports, or about 16 million mt per year. The country plans to fully abandon imports for its power plants in Siberia and the Urals until 2030. Additionally, Kazak domestic consumption is down.

As the result, the amount of investments the industry will receive in coming years most likely will decline. Speaking during a press conference on October 11, spokesperson of JSC ArcelorMittal Temirtau, Yakov Meyer, said in 2016 the com-
pany decided to cut planned investments 2.5 times, allocating only US$25 million into modernization of new equipment at coal mines.

In the previous decade, ArcelorMittal brought $1 billion into coal mining. In addition to funding modernization in 2016, it planned to allocate $35 million in production of Ekibastuz deposits. However, it seems the down market forced the company to diverge from these plans, so it is not expecting production growth in the near future.

In addition, industry analyst Sergei Perhalsky cited company sources when he suggested in 2016 and 2017 that ArcelorMittal might close two of eight mines: Abaiskaya and the mine named after Kortenko. Currently, the company is producing 11 million mt of coal annually, and the closures will reduce this figure by 10-15%. However, ArcelorMittal has not confirmed this information.

According to the company, by 2020, the final stage of the full conversion of the Bogatyr mine will be completed, with truck and conveyor technology transporting coal to the surface for blending and continuous loading into railcars. The use of this technology antecedes the use of modern high-performance equipment, including shovel excavators, large dump-trucks, construction of crushing and transshipment points, systems of main and lifting conveyors, a blending and loading complex, in the composition of which there are receiving and shipping conveyors and other items.

In 2016, Bogatyr Komir plans to invest KZT 6 billion ($17.4 million), Ulianov said. Since, the company has not commented on investment plans. 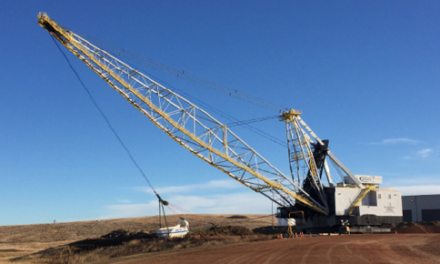 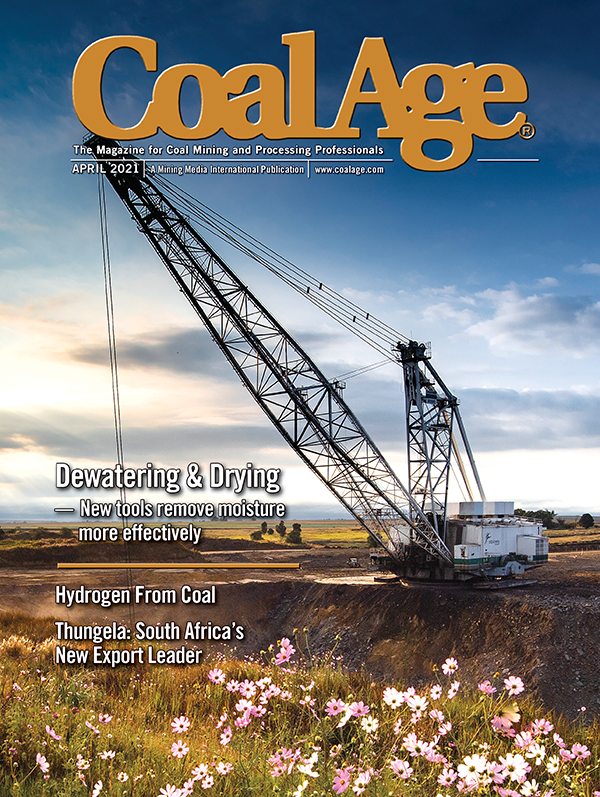