Driven by a series of tragic mining accidents, the Mine Improvement and New Emergency Response (MINER) Act was passed in June 2006. One of the clauses of the MINER Act mandated mine operators to adopt two-way wireless underground communications and electronic tracking systems that would allow personnel on the surface to communicate with and know the location of workers underground. The act prescribed action items and special focus areas related to mine safety and health, requiring mines to include detailed plans for two-way communications and tracking in their Emergency Response Plans (ERPs) and to have the systems installed by June 2009.

When the act was passed, limitations existed relative to the commercially available products and the technologies that could potentially be applied to underground mining environments. As a result, the National Institute for Occupational Safety and Health (NIOSH) formed an interagency working group to investigate technology and research developments that could be applied to mining. The group assessed the status of CT technologies and transferability potential to mining. The discussions ultimately revealed that viable new technologies were not yet available for mining or would not be fully developed by the 2009 deadline.

Accordingly, NIOSH took a multifaceted approach to resolve this challenge. This approach supported the development of communications and tracking systems through both extramural collaborations and intramural research. The effort was funded by two Emergency Supplemental Appropriations acts designed to award contracts and grants to develop new and enhance existing CT technologies. NIOSH also formed a CT research group within the mining program to provide intramural research support to expedite the development through modeling and measurement of existing and emerging technologies. This approach led to significant impacts and aided in the advancement of systems that exist in mines today, such as those based on ultra-high frequency (UHF), medium frequency (MF), through-the-earth (TTE) and tracking technologies.

Emergency Supplemental Appropriations acts provided funding for NIOSH to facilitate the development and diffusion of mine safety technology. Accordingly, NIOSH established a competitive grants and contracts program to encourage the development, manufacture, performance testing, or investigation of related issues for new mine safety technologies and equipment such as communications and tracking systems.

In addition to the extramural work, NIOSH recognized the need for intramural research to support CT development. The CT research group conducted specialized research to understand the controlling factors and variables affecting CT system performances. New facilities were created under this research project, including the construction of a radio frequency (RF) testing chamber located in the NIOSH Pittsburgh Mining Research Division’s laboratory in Pittsburgh, Pennsylvania. The new resources supported the “Communications and Tracking Systems Modeling and Performance” project, which focused on filling knowledge gaps and expediting the development of CT systems. The research was divided into several tasks, including modeling and validating UHF path loss, evaluating the performance of MF and TTE systems, and improving tracking systems.

While the functionality of the systems was well understood by manufacturers and other industries that employed them, the mechanisms that affected their performance in underground coal mines were relatively unexplored. For example, handheld radios that can communicate over miles on the surface may only communicate over a few hundred feet underground. To that extent, the NIOSH project’s research was specifically aimed to investigate these mechanisms and develop considerations for the installation and use of these systems in the underground coal mine environment. 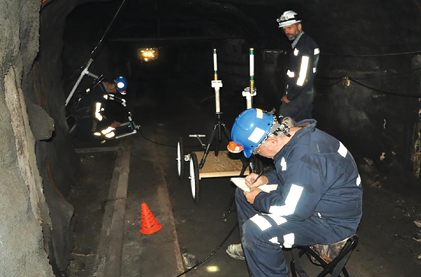 NIOSH researchers characterize signal propagation based on antenna orientation and location within a coal mine entry.

As part of its intramural research, NIOSH designed and developed test protocols and measurement devices. The results showed that radio signal propagation is affected by several parameters, including mine entry dimensions; entry curvature; electrical properties of the coal/rock; the frequency used for the specific radio; the specific radio antennas, their orientation in use, and their location in the entry; the distance of conductors from the ribs; and possible connections to ground. More specifically, researchers focused on system performance as a result of electromagnetic (EM) propagation with different entry widths and heights, composition and structure of entry and tunnel walls, crosscuts, overburden depths, obstructions from equipment, metallic conductors, and objects typically found in the mine environment.

NIOSH also conducted research into the transmission line propagation and the coupling of radio signals from radios to conductors and vice versa to understand the limitations based on separation distances, operating frequencies and operating settings for MF systems. Specific to TTE systems, NIOSH researched several controlling parameters such as RF noise levels affecting the signal clarity, communication distances, conductivity of the ground, antenna alignment, grounding techniques and operating frequencies.

Researchers developed theoretical models and conducted experiments to quantify real-world conditions to validate the findings. The agreement between the models and measurements served to more accurately predict a system’s performance under specific conditions. These efforts were critical to understanding the environmental factors that control and limit the path loss to be able to optimize system performance, enhance radio service coverage, improve the quality of the communications, and increase the system performance reliability for each of the technologies explored. 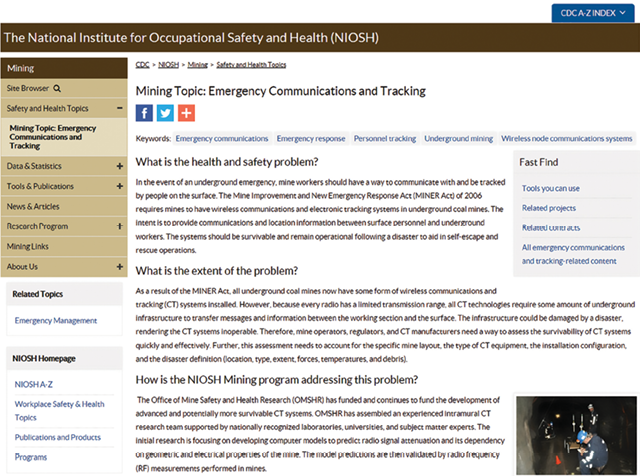 Overview of emergency communications and tracking on the NIOSH Mining website.

Since its inception, the NIOSH research project plan included yearly presentations of the research findings, implications and progress in the research. The Electrical Safety team executed communications and tracking workshops and tutorials to raise awareness relative to the state of the technologies and increase the knowledge base on designing and developing new systems. These workshops created a forum to disseminate research findings and establish collaborations for continual development, and they were well attended by global audiences, including mining companies, CT system manufacturers, MSHA representatives and university programs. The results and recommendations developed through the intramural research were also disseminated through technical publications and conference presentations as a means to reach system manufacturers, mine operators and academia. Overall, the research established several collaborations that expedited the commercial availability of systems to meet the MINER Act requirements.

The MINER Act continues to be a major driver in the development of technologies, as was the case with communications and tracking systems. A number of the systems developed through the collaboration and funding available through NIOSH resources have had a significant impact on the industry as they are currently being used in operating mines throughout the U.S. and globally. Over the past 10 years, the intramural and extramural work completed under the NIOSH initiatives has aided in the advancement of the CT technologies that are now being effectively deployed to improve safety and health standards. These results enabled end users to effectively install and use CT systems for health and safety purposes. The mining industry continues to find ways to improve these systems as well as find new uses to improve functionality such as the integration of sensor networks. Ultimately, the knowledge and technologies developed will continue to evolve and create opportunities to enhance the health and safety capabilities for the mines of tomorrow.

Mention of any company or product does not constitute endorsement by NIOSH.

The intramural research findings and results of the CT contracts are accessible through the NIOSH Mining web page.

Additionally, while the formal research project has concluded, any questions and requests for additional information can be directed to the team leader for the NIOSH Mining Electrical Safety Team, Miguel Angel Reyes, at mareyes@cdc.gov or (412) 386-5072.

New Technology Allows Mine Operators to Get Optimum Tire Performance 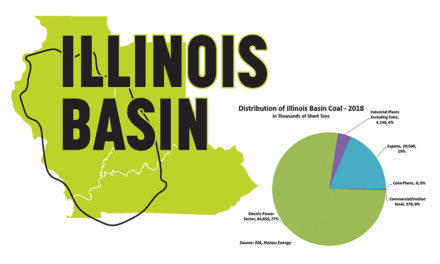