When Teck Resources was looking for a technology standard for vehicle safety across all of its operations in 2012, ease of use and functionality were key components. Ultimately they selected a SAFEmine collision avoidance system, and since that time the company has been working with the Canadian coal producer. A trial of SAFEmine’s Traffic Awareness and Collision Avoidance System (CAS) was conducted on surface mining equipment and light vehicles at Teck’s Line Creek operations near Sparwood, British Columbia that year.

In a charter developed by Teck, which had released a request for proposals (RFPs) several months before seeking input from the sector, the crucial points were to evaluate available technologies and suppliers that could be put into place portfolio-wide. Additionally, the producer had a desire to reduce the number and severity of equipment accidents.

For SAFEmine, the core issues were to understand Teck’s operations environment and standard operating procedures, and also keep in mind that the needed solution would be supporting — not replacing — the company’s existing safety outlines. Other considerations were keeping operator overload and nuisance alarms to a minimum.

To meet the trial’s objectives, including demonstrating effectiveness of the system to increase operator awareness, an on/off study to show changes in operator behavior, and proving adaptability to meet the mine’s specific requirements, a six-week program was designed to record and compare vehicle data. This included light and heavy vehicle interactions with each other and with a shovel.

Also demonstrated was online, real-time tracking of vehicles and vehicle status, which allowed remote collection of data. Alarms associated with speeding, close vehicle interactions and potential collisions were analyzed. Another portion of the program analyzed customized alarming scheme performance on the specific interactions being examined.

Traffic Awareness and CAS Development
Traffic awareness and collision avoidance functions are based on position, speed, heading and vehicle type. For traffic awareness, visual information on vehicle locations is provided based on distance and position to help anticipate the danger and raise awareness. For collision avoidance, which is based on path prediction and dynamic safety zones incorporated into the system, an audible alarm serves as a call to action.

The CAS system components consist of four parts: a GPS/RF antenna, which houses both the GPS antenna and the RF antenna for the vehicle-to-vehicle radio network; a main unit with a GPS receiver, processor and on-board memory (black box-type recording); a remote display with LED indicators to show the location of nearby vehicles and to generate audible collision alarms when two or more vehicles are on a collision course; and a Wi-Fi antenna for connection to a server for real-time tracking and monitoring of equipment.

Users can also connect remotely to each outfitted vehicle to download log files. While it was not a part of the trial program, the CAS additionally has optional radar and camera integration capabilities.

The display indicates 360° of coverage with no blind spots, and up to 50 vehicles can be displayed on the unit at the same time. Simultaneously, the black box recording function allows for continuous recording of vehicle parameters, location and collision alarms. Fixed hazard mapping permits the detection of objects that are not outfitted with a SAFEmine system, such as overhead power lines, lighting plants and stop signs.

The SAFEmine technology was originally developed for the general aviation industry and within the past few years has become a leading solution for the enhancement of vehicle safety in open-pit mines of all types following development efforts with Anglo American. The Swiss-based company, which has branch facilities globally, became a member of the Hexagon group of companies in March 2014.

At press time, SAFEmine collision avoidance systems were on board more than 18,000 vehicles at 45 mining operations across four continents. More than 1,000 of those installations have live tracking and reporting.

The Deciding Factor
Teck mining technology principal advisor Peter Wan said that SAFEmine was selected as its preferred solution for reducing or eliminating contact incidents between heavy mining equipment and light vehicles following a detailed evaluation process. “The evaluation process started by working with each of our mining operations to define a set of functional requirements for reducing vehicle to vehicle incidents,” Wan said, adding that these functional requirements were detailed in a request for information (RFI) from technology vendors, with a shortlist of technology providers then issued with an RFP.

“SAFEmine was selected based on its ability to not only detect the proximity of vehicles, but also when they were on a potential collision course and deliver this information to equipment operators via an intuitive user interface. The ability to quickly install systems in visitor vehicles was also a significant benefit,” Wan said. Wan also noted that Line Creek was selected as the preferred site for the trial on the strength of its leadership and openness to change.

Teck conducted a trial of the SAFEmine CAS system before making a decision to recommend the technology for all of its surface mine sites. The trial at Line Creek consisted of an on/off study on 12 pieces of equipment. The fleet included four CAT 793F haul trucks, one Komatsu WA1200 front-end loader, one P&H 4100 electric rope shovel, one CAT 854K rubber-tired dozer, one Western Star lubrication truck and four Ford pickup trucks.

According to SAFEmine North American Business Development Manager Todd Ruff, after the systems were installed on the vehicles, the alarm functions and displays were turned to the off mode. The system still functioned and all vehicle movements and alarms were recorded, but the alarms and traffic indication lights were not presented to the operators of the vehicles. “This allowed us to record operator driving behavior and equipment interactions when the operators were receiving no CAS feedback,” Ruff said. “After two weeks, the system was turned fully on with all alarms and traffic indicators presented to the operators. This on phase lasted four weeks and data was collected as before.”

More than 50 million data entries were analyzed, as the main unit would collect information every second of use for each parameter and download en masse from the vehicle unit via a remote link from the company’s Switzerland headquarters. At the same time, Teck was evaluating its own requested criteria including accuracy, reliability, usability and overall site safety improvement with SAFEmine in place.

Teck noted in its results that GPS location accuracy was sufficient for reliable equipment tracking and collision prediction. Other parameters such as GPS coverage, peer-to-peer communications reliability, and system uptime all passed Teck’s criteria.

Successful feedback was also provided to the supplier for usability, and noted that administration of visitor or contractor units took less than five minutes to install.

On overall site improvement, Teck said in its feedback that there was an overall reduction of proximity events per operating hour, based on the baseline data it obtained. There was also a drop in speeding events. Specifically, according to the producer, for a pickup truck, the number of logged over-speeds during the off period was 123 while 57 were recorded during the on period. Also, 25 incidents of maximum speeds more than 65 km/hr were identified in the off period. Just one occurred during the on phase.

Ruff said that obstacles the companies encountered during the trial were overcome with relative ease, and even spurred additional functionality for the system. “We experienced challenges involving nuisance alarms when the dozer worked close to the shovel during clean up,” Ruff said of one instance when collision alarms were being generated in the dozer and the shovel because the dozer had to work very close with many back and forth movements. “To solve this, we modified the software to allow dozer operators to work close to the shovel with no collision alarms. However, we did want to provide both operators with a reminder that the dozer was approaching. A circle was defined around the shovel to indicate the boom swing radius. When the dozer crossed this circle, a reminder alarm (short beep) was given to the shovel operator and dozer operators. No other alarms were given so that the dozer could clean up next to the shovel without generating alarms. The shovel operator was provided with a graphical display showing at TopView of the immediate area with other vehicle locations and identification numbers displayed on a small video screen.”

Ruff noted that, since the program, it further developed that into a new product, ShovelAssist, which has special alarming schemes for shovels and the ability to integrate radar for close detection of vehicles within the body swing radius. Cameras on the system can also provide a view of blind spots around the shovel.

“All these technologies are integrated into one touchscreen video display to reduce clutter in the shovel cab,” Ruff said.

SAFEmine found in its experience at Line Creek that real-time tracking and reporting increased the value of the system for operations, and that workers will indeed change driving behaviors with the system on board so as to avoid dangerous situations. It also noted that it was extremely important for the CAS to minimize nuisance alarms, which was achieved using intelligent alarming based on context and risk. Dynamic safety zones and vehicle path prediction further limit alarms to just those that require action.

Company-wide Adoption
SAFEmine has been selected as the recommended CAS technology for all Teck mines. Teck’s Carmen De Andacollo copper mine in Chile is also installing the system permanently on all surface mine equipment and vehicles (rollout was still occurring at press time).

Teck Alaska’s Red Dog operation also has conducted a trial of SAFEmine; that program occurred from November 2013 through February of this year. “This was a unique application of our CAS system with voice announcements and special long range vehicle-to-vehicle radios,” Ruff said. “They needed a system to warn truck operators of approaching vehicles on their 50-mile-long port road; this road is used by tractor-trailer units to haul concentrate from the mill to the storage facility at the port.”

At that site, other road maintenance equipment and light vehicles also travel this road, and in low visibility situations such as fog, snow and darkness, vehicle operators need an advanced warning of oncoming traffic. “Long-range radios provided vehicle detection distances of 800 to 1000 m and a voice announcement is given in each vehicle’s cab that says ‘haul truck ahead’ when a truck or other vehicle is approximately 800 m away,” he noted.

This trial was conducted on one light vehicle, seven haul trucks and a fuel truck and was successful. Rollout of the system for the port road application is being discussed. 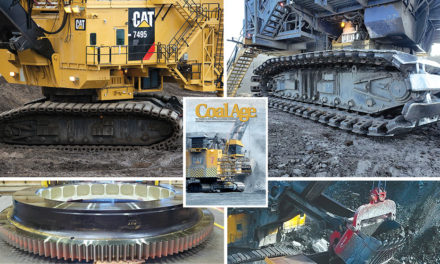