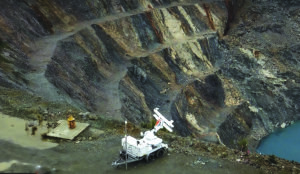 Along with the obvious factors that affect slope stability in mines — rock strength, stratiﬁcation, discontinuities, groundwater seepage, external loading and others — changes in atmospheric conditions, particularly in large mines, can affect the clarity of information needed to detect deformation. IDS GeoRader has developed Precision Atmospherics, a corrective algorithm that works with its 2D Real Aperture Radar ﬂeet to alleviate the problem.

Pit slope design has always been a quintessential risk-vs.-reward endeavor. The latest geotechnical products and services offer the prospect of reducing risk while maximizing economic return.

by russell a. carter, contributing editor

The ongoing task of ensuring slope stability in a mine involves a broad range of disciplines and interests. For a geotechnical engineer, it encompasses fieldwork, data analysis and iterative modeling to produce an acceptable pit slope angle plan for a given project or mine phase. For a mining engineer, pit wall stability will have a strong influence on mine layout options and use of available resources to maximize production efficiency. And for a mining executive, pit slope strategies are inextricably linked to project economics; steeper angles are typically associated with lower stripping ratios and higher NPV numbers.

This, of course, is an oversimplification of a fundamental and complex topic. Regardless of the title on the office door, an “unplanned rock movement” event raises alarms at every level. In a business environment in which equipment is getting more expensive every day, workforce safety and availability are paramount issues and investor interest can evaporate overnight after bad news, an effective slope stability planning strategy is simply table stakes for entry into the realm of responsible mine management.

It’s an area dominated by measurements and math — risk calculations, 2D/3D analysis techniques and economic estimates, to name just a few — but even carefully monitored slopes can fail at unexpected times and in unforeseen ways. In the sidebar “Focusing on Foundation Failure in Rock Slopes,” an experienced geotechnical engineer explains how failures can arise from previously unidentified causes. But, even when the underlying causes of an impending failure are known, the final outcome might be difficult to predict. For example, the April 2013 Manefay rock avalanche that took place at Rio Tinto’s Bingham Canyon copper mine in Utah involved a slope that had been intensively monitored far in advance of the event, but ultimately failed faster and in much larger magnitude than expected, resulting in what’s considered to be the largest non-volcanic — and likely the most expensive — slide in North America’s history. The outcome could have been much worse without the mine’s extensive geotechnical monitoring and analysis program, which provided sufficient lead time to prepare and evacuate the pit area before the massive slide occurred.

The unpredictable nature and wide range of variables that can trigger landslides make slope stability a prime target for advances in technologies that can be applied to improve mine design and safety. Some of the most recent developments focus on the quantity and quality of data available to a mine’s geotechnical engineers.

For example, in April IDS GeoRadar introduced its Ai.DA software monitoring tool for Hexagon’s Guardian, which the company said pioneers the introduction of Artificial Intelligence (AI) in slope stability monitoring.

According to the company, Ai.DA provides an additional smart processing layer to radar data. Through the use of AI algorithms, it simplifies the identification of movements from possible residual noise by evaluating the consistency of the detected movement trend with typical slope instabilities behaviors and models, helping professionals to optimize processes and take better decisions.

Guardian now assimilates data from, among other sources, Hexagon’s MineProtect Collision Avoidance System (CAS) server. In 2020 Francesco Coppi, production manager–of interferometric radars at IDS GeoRadar, told Coal Age, “It can automatically import the position of vehicles and working machineries and visualize them in real-time on the radar displacement maps. Highly accurate displacement data is provided to monitoring specialists in near-real time, as it happens, and using an advanced automatic atmospheric correction algorithm to avoid any mistake.”

Although many geotechnical experts warn against blind acceptance of analysis results and impressive graphics offered by the latest technologies, there are certainly identifiable benefits that can be achieved with their assistance — one of the most significant being the immediacy of results provided by the use of drones, computer vision and AI instead of pit walks by individuals to inspect slopes and collect data. As AI platform developer Strayos points out, frequent pit analysis is simply a fact of life for large operations with abundant resources to carry out that task; for smaller mines, it may be problematic due to cost, available manpower or reluctance to adapt to a new system. In either case, says Strayos, the process is costly and, because of the time needed to collect, process and interpret the data, the results are generally outdated by the time of their completion.

However, according to Strayos, the time and labor savings, along with up-to-the-minute awareness of pit conditions, provided by drone surveillance and AI software can provide insights into pit conditions that may increase productivity, safety and compliance performance.

It’s also not unusual for a new or expanding operation to have reams of mineral-deposit data available — but with a focus on resource evaluation, not on the geologic structures, stresses and groundwater conditions that a geotechnical staff needs to plan slope angles. In those situations, geotechnical engineers might have to consider natural variation and account for unknown values using statistical analysis, according to Rocscience, a Canada-based software developer, which notes that insufficient material strength and structure data can lead to high levels of uncertainty in design. Other influential factors include safety considerations — avoidance of instability from an inadequate understanding of ground conditions; and time constraints, such as when changes in commodity prices require updates in mine design, which then necessitate geotechnical reassessment, often in short time frames.

The company offers a portfolio of software tools that allow geotechnical engineers to:

Use probabilistic analysis to account for statistical variation and unknown values; and

Its Slide3 program is a dynamic 3D Slope Stability Analysis tool that is designed to assist geotechnical engineers in assessing pit-wide stability in one model. According to the company, users now can construct slope stability models easier and faster and can choose whether to build surfaces from point cloud data or import block models from applications such as Leapfrog, Deswik, Datamine, and Vulcan. Engineers can search for multiple critical failure surfaces with the advanced Multi-Modal Optimization algorithm and leverage the integrations with the company’s Slide2, RS3, and RSData tools to compare and verify the results of an analysis.

Rocscience said it recognizes how time-consuming it can be for an engineer to manually change specific factors to ensure a model satisfies different design standards. Normally, users must specify custom factors and properties according to each design standard before running their analyses. A recent update in Slide3 allows the user select a specific design standard, and the variables will change automatically, streamlining the workflow.

In sprawling, complex environments such as those often encountered at large mines, atmospheric variability can hinder detection of early-stage slope movement. As the Australian company GroundProbe points out, the enhanced range of the newest slope stability radars can aggravate the problem: In the early 2000’s, the first GroundProbe SSR operated in small pits or across strip mines where a maximum radar range of about 400 m was sufficient. Now, its SSR-Omni model covers an imaging range of up to 5.6 km (3.4 miles). Although the performance improvements are significant, atmospherics have made meaningful data capture, interpretation, and management increasingly complex.

Groundprobe says its new Precision Atmospherics corrections algorithm significantly reduces the noise caused by turbulent atmospheric conditions, providing a clearer picture of real deformation. It’s the result of several years of rigorous development, according to the company, during which Groundprobe partnered with mines in different climatic regions as parts of an extensive validation program, including the Bingham Canyon mine.

Dustin Hicks, senior engineer–Geotechnical at Bingham Canyon, was involved in Precision Atmospherics’ development and testing since 2019, when the system was introduced there.

“GroundProbe delivered an SSR-Omni equipped with Precision Atmospherics to Bingham Canyon to demonstrate its capability in the rapidly changing atmospheric environment that our site experiences,” said Hicks. “The Precision Atmospherics algorithm effectively managed a variety of atmospheric conditions including blast and wind-induced dust plumes, rain and snow, which resulted in significantly less contaminated data.

“It reduced the noise on a scan-by-scan basis, which opens the door for tighter alarm configurations that would otherwise overburden the geotechnical team.”

“This is important for gleaning the potentially significant geotechnical problems that can only be detected through long-term analysis. Both rapid and slow trends are shown in a single data set, and there is no post-processing required to detect slow movements,” said Noon.

Albert Cabrejo, global practice lead-Geotechnical at GroundProbe, said Precision Atmospherics qualifies as an important addition to stability monitoring using interferometric radars because, “It responds directly to the most important request from geotechnical engineers around the world: data quality.”

This article was adapted from an article that was originally published in the November 2022 edition of Engineering & Mining Journal (E&MJ). 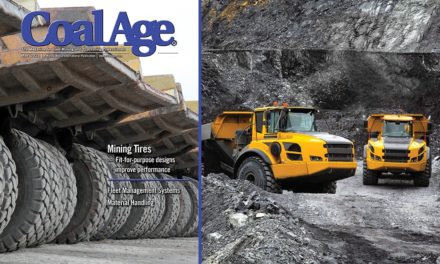 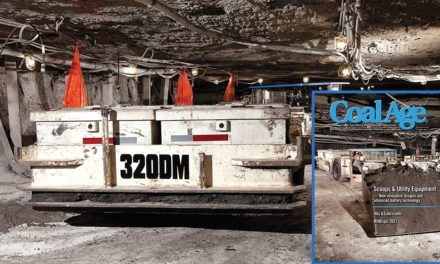 The Selection Pool Deepens for Submersibles