Full stream mechanical coal sampling is the method used to collect samples to be analyzed for shipment quality in most cases. From these samples quality adjustments specified in coal supply agreements between coal companies and buyers can be made. If a sample is not collected according to ASTM methodology, accepted practices and proper manufacturer recommended maintenance of sampling equipment, there is no chance to obtain a correct laboratory analysis.

The basic unit of ASTM sample collection is the increment. Each increment (operation of the sampling cutter) is collected using guidelines recommended in the ASTM D7430–Standard Practice for Mechanical Sampling of Coal. This practice was first published in 2008. The purpose of this practice being published was to consolidate mechanical sampling guidelines and therefore provide one place in ASTM where information specific to mechanical sampling can be found. Coal supply agreements should reference this method for correct operation of mechanical samplers, auger samplers, total quality management of sampling systems and bias testing.

The sequence of events to obtain a contractual analysis sample is as follows:

Each step in this process is important. Multiple units of sampling, sample preparation and laboratory analysis are used. Several persons contact the sample from removal from the sampling system, sample handling, processing and analysis to go from 10,000 tons of coal (or more) to 1 gram (1/28 of an ounce) for analysis. A thorough quality assurance plan and audit plan must be in place to ensure that the process outlined above, going from 10,000 tons (or more) to 1 gram for analysis, is conducted correctly. It is also very important that the procedures are understood by site personnel to ensure consistent operation and sample handling. Training is needed on a regular basis.

Operators of sampling systems who don’t have a comprehensive operating and maintenance program risk bias, availability issues and failure of audits by inspectors, which can show that the contractual sample is not taken correctly. When observers see issues it calls attention to the system operation and results in more frequent and detailed inspection and audit evaluation.

Financial Consequences of Bias—Contract Issues
What is the financial consequence of a finding of bias? The table above shows that an unresolved moisture bias can mean significant financial liability. The contractual sampling system was tested for bias. The bias test resulted in a 0.19% moisture bias which was not subsequently resolved. When the bias test results were given to the utility, a determination of a financial liability was calculated and submitted to the coal company for reimbursement over the 1 million ton contract (See Table 1)

In the other case, in Table 1, the statistical estimate of moisture bias was 1%. In the case of a 1% moisture bias, the economic consequence was much larger for a contract that had nearly 5 million tons committed.

An additional consequence for the utility is that the opportunity for suspension or rejection may not be possible if the observed analysis and contract specification are borderline. One possible resolution for a bias is to just add or subtract as appropriate the estimate of bias to the contract specification. The flaw with that option is the assumption that a bias is linear i.e., the same amount consistently. When a known bias exists it is prudent to resolve the issue and then take away any potential problem. A moisture bias is relatively easy to resolve as the cause of a moisture bias is almost always related to the feed rate to the sampling system crusher.

Examples of Sampling System Observations During Inspections
Sampling system inspectors who use the current methods based in mathematics versus just visual observations know that when all is within ASTM and industry accepted practice the system should be operating optimally. It is not unusual to be asked which things should I do and which observations do not make a difference? Since the current design of bias testing is to take stopped-belt samples to compare with the system save sample, post bias test diagnostics are difficult. The pre-test inspection is important to enhance system readiness for the bias test.

The element of “surprise” is a risk to the operator of a sampling system. The system operator is put in conflict with the buyer or seller if an inspection results in a finding of equipment or operational issues and the issue was unknown to the system operator. During conduct of sampling system inspections for utilities and mining companies, the following were observations from three cases:

The recent bias test report was reviewed. The secondary sampler of this two-stage system has the capability to deliver the increments to two final sample containers located on opposite sides, A and B of the secondary sample belt feeder. During the bias test, the A and B sample was combined for analysis. The routine operational procedure of the system was to take one side—the A sample for the “in-house” analysis and the other side—the B sample was sent to the independent laboratory for the utility’s analysis. If the two sides are to be used independently, the system operating parameters must be set to provide the minimum number of increments per ASTM for each side and the system must be tested during the bias test to verify that this practice, i.e., each side is “unbiased.”

Regulatory Authority & Quality Assurance
When testing a belt scale or a batch weighing system there is a regulatory authority that certifies the operation of the weighing system. With mechanical sampling, the authority is the language in the coal supply agreement. Coal supply agreements have some specificity as to sampling using the phrase “according to ASTM” to describe issues related to sampling and operation of a mechanical sample. A bias test, extraction table, sampling ratio charting, review of operational and maintenance procedures and other parameters may be cited in the agreement. Many agreements may not cite the new ASTM sampling practice, D7430.

Specific analysis methods may or may not be specified. More specificity in coal supply agreements is recommended to ensure that the preferred quality assurance parameters will not be ignored. The process to ensure the correct sample is collected and analyzed is not solely to use a bias test as the ultimate authority. The bias test is only part of the process. After the bias test, what happens in the intervening period between bias tests?

A program of sampling system quality assurance can provide confidence to the contract parties to ensure that a good faith effort is made. An agreed upon program can outline processes for contract samples to be collected in the proper manner and the processes from sample collection to laboratory analysis be known i.e., no surprises. A competent program contains the following elements:

Seven Step Program for System Improvement or Commissioning
It is risky to “jump into” a bias test as soon as the first system is operational. The plan below is a measured action plan to ensure successful system startup and improvement of an existing system.

Extraction Tables
To properly understand the operation of a sampling system an extraction table is essential to verify sampling system operating parameters and system flow rates. By using an extraction table, the system operation can be mathematically evaluated. Also, one can exercise “what ifs” such as the impact of increased or decreased tons per hour flow rate to the primary sampler.

By using the extraction table, as preparation plant personnel use the plant flow sheet to evaluate flow rates and equipment capacities, the sampling system inspector can formulate mathematical recommendations versus estimates, which can cost time and money if not correct. The extraction table also results in total sample mass and design sampling ratio values. This evaluation and planning tool is very useful, but is not discussed in ASTM D7430. Table 2 displays an as-found extraction versus a recommended extraction. 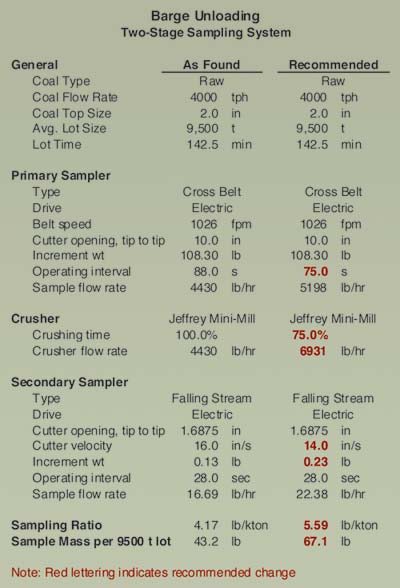 Sampling Ratio Control Charts
Use of the sampling ratio control chart is recommended in ASTM D7430. Currently some coal supply agreements specify their use. These charts have rules and limits and are process control charts, which provide mathematical evidence that the system is operating correctly. The example control chart in Table 3, which is very easy to use, is the result of a visual basic adding to Excel. By using the chart consistently, one can verify the correct extraction of increments from the coal stream to be sampled. Also one can show consistent operation and accumulate an operational history to explain special cause occurrences such as crusher pluggage or other issues. In this manner the operator is provided with current information as to each sample’s conformance to the ASTM limits stated in D7430 i.e., whether the system is within the 15% limit for percent coefficient of variation and 10% difference between the design (calculated) sampling ratio and the average observed sampling ratio. 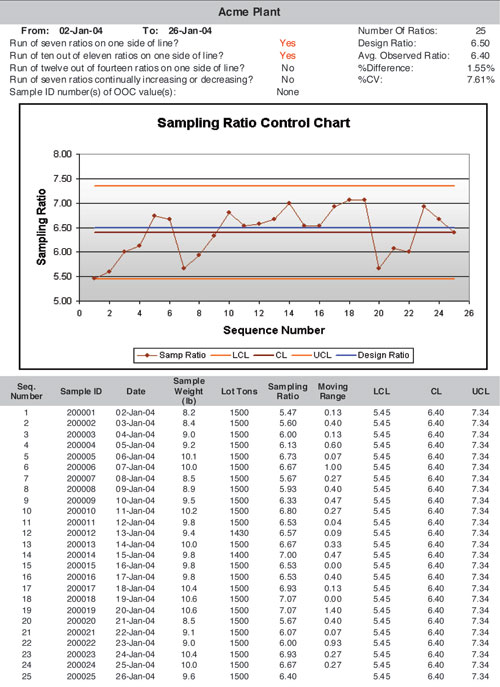 Coal sampling systems are mechanical devices that operate in a predictable way to extract and accumulate increments from coal streams. The risks presented and mathematical methods for evaluation of mechanical sampling systems presented above can provide the confidence of correct system operation. These methods enable evidence to be provided to inspectors, management and others who may question or just need assurance of the system’s correct operation.

Using these methods we raise the level of what constitutes a “good” sampling system from “doesn’t plug up and puts coal in the bag.” to one evaluated using mathematical methods. This prevents issues being presented by auditors or inspectors which can surprise and embarrass operation and management personnel.

Renner is the manager of inspection and performance testing for SGS Minerals Services. This article was adapted from a presenation he gave at Coal Prep 2012. He can be reached at: chuck.renner@sgs.com.