As the country emerged from one of the harshest winters in recent memory this spring, coal operators were about as excited as they could be considering the headwinds they faced. The coal burn climbed, and so did natural gas prices. Utilities had drawn stockpiles down significantly. Forecasts based on first quarter conjecture were calling for an increase in thermal coal sales and production, especially from the Powder River Basin (PRB) in Wyoming; unfortunately, the railroads serving that region weren’t prepared.

Based on data from the Energy Information Administration (EIA), coal-fired power generation has grown 6% through June while natural gas generation has declined 2% as utilities continue to switch from gas to coal. According to the Edison Electric Institute, coal accounted for 41% of electricity generation through June. The major U.S. coal producers believe that total 2014 coal demand could rebound by more than 30 million tons over 2013 levels.

The PRB is bustling with energy-related activity today, and it’s no longer a domestic coal-fired power play. Cloud Peak has been successfully exporting coal through Canada and has recently increased its export capacity. Oil shale production is also growing, and Arch Coal has capitalized on that activity by building a terminal at the Black Thunder complex.

The future looks bright for the energy capital of the world. Stockpiles at U.S. power plants burning PRB coal are estimated to have dropped to 62 million tons at the end of June, down 18% or 14 million tons from one year ago. So demand for PRB coal is and will remain strong. Many of the mines have been limited by rail service interruptions. Poor rail service in the 80% performance range has continued through July from both major carriers (Union Pacific and BNSF) and has been blamed for a reduction in forecast sales across the board. The railroads are taking measures to improve service, but seasonal flooding and poor weather have delayed their efforts. In the meantime, coal operators are looking at ways to hold costs down until pricing and rail service improve. 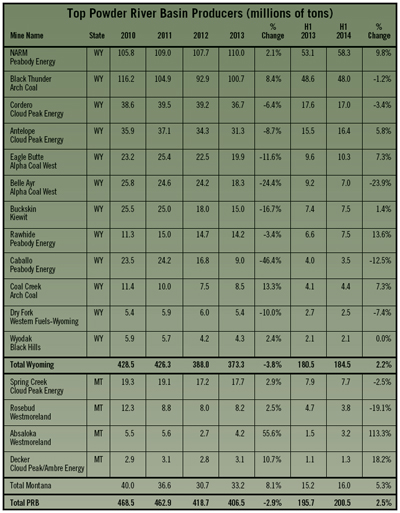 Peabody Puts the Situation Into Perspective
Peabody is the largest U.S. coal producer and it has a large footprint in the PRB. Greg Boyce, chairman and CEO, Peabody Energy, recently explained that southern PRB inventory levels are expected to fall further below normal by the end of the summer on higher demand and continued rail performance issues. “Rising coal utilization, higher natural gas prices and reduced shipments resulted in the largest stockpile withdrawl in 36 years,” Boyce said. “The cold winter and spikes in natural gas prices again highlight the need for low-cost, reliable, base-load coal plants in the U.S. generation mix.”

The focus recently has been on the potential for improvement in PRB pricing over the summer because of these low inventories, but that has not materialized yet. Answering questions from analysts recently (Seeking Alpha), he explained the lack of pricing activity for PRB coals. “In terms of customer activity, clearly we are seeing customers sit on the sidelines because they don’t need to buy something that they can’t get delivered,” Boyce said. “Everybody is currently focused on getting their original 2014 contract deliveries. They are now rethinking their target inventory levels for 2015 and 2016.” Boyce believes Peabody Energy will see multiyear contracts for 2015, 2016, 2017 and beyond out of the PRB. During the second quarter, Peabody Energy priced 35 million tons, about 27 million tons of that was under the openers, under existing contracts.

Boyce also tried to clarify the situation as far as rail service. “The railroads are adding power and crews, and they are getting through their maintenance period,” Boyce said. “As that volume continues to flow, I think we will see utilities begin to step in and buy incrementally more tons and then contract more heavily for 2015.

“June was one of the lowest performing months that we’ve seen in a number of quarters,” Boyce said. “July is falling in right behind that, even though we’ve started to see some incremental improvement.”

Boyce explained that if 2014 numbers are compared with 2013, the railroads are up about 4% in volume. “The issue is the demand was significantly higher than 4%,” Boyce said. “In the past, when [the railroads] find themselves in these situations, [the solution is] all about adding power and crews. And then it’s all about rebalancing the network to try and get higher fluidity and higher speeds on the track.”

The weather has not helped the situation. “We’ve had a number of weather situations that have caused derailments just about the time that they were getting up to speed,” Boyce said. “So while it’s frustrating for us, it’s frustrating for everybody else, and the coal sector I’m sure is extremely frustrating for the railroads as well. But this is a situation we have worked through before.”

Traditionally, the third quarter is one of the highest shipping quarters of the year, Boyce explained. “So… we would expect to see the rail system begin to increase and perform much better, and then hopefully that continues through the end of the year,” Boyce said. “And then, with the changes that they are making, we would expect their ability to deliver in 2015 to be much higher.”

Cloud Peak Delivers PRB Coal to the World
For the second quarter of 2014, Cloud Peak reported that its cost control measures resulted in a 21% improvement over the same period in 2013. The company is maintaining its full-year earnings guidance, despite railroad interruptions decreasing expected full-year shipments. “We were disappointed that rail service interruptions continued to impact our shipments in the second quarter,” said Colin Marshall, president and CEO, Cloud Peak Energy. “We will continue to focus on controlling costs as we await improved rail service to allow us to ship our contracted tons through the rest of the year.

“We continued to achieve significant cost and capital savings from our in-house condition monitoring and repair work,” Marshall said. “These savings were partially offset by higher labor and fuel costs associated with the additional workload and tons shipped. We continue to plan for higher shipment rates for the rest of the year, which we expect to further reduce our average costs per ton as the year progresses.”

“So far this year, we have seen an increase in requests for additional coal for delivery this year,” Marshall said. “As we are fully sold out for 2014, we have not been bidding on these requests.”

Unlike other PRB coal operators, Cloud Peak exports a portion of its production through Westshore Terminals in Vancouver, and the company incurs demurrage costs when ships are delayed waiting for coal. “Recently, demurrage has been decreasing as we continued to work closely with our customers, the BNSF Railway, and Westshore Terminals to improve scheduling while rail delays continue,” Marshall said.

Cloud Peak Energy’s Spring Creek coal is increasingly well regarded in the Asian marketplace due to its consistent high quality. The company now believes it is considered equivalent to the best Indonesian coal brands that many of these new plants are designed to burn.

“During the first half of 2014, we saw strong interest in Spring Creek coal in our primary focused markets of South Korea, Japan, and Taiwan as they work to increase generation in the face of growing demand and reduced nuclear generation,” Marshall said. “These countries are moving ahead with numerous projects to build additional modern coal-fired generation, which will be designed to consume high-grade subbituminous coal, including our benchmark Spring Creek coal.”

“Although PRB costs came in above our expectations, this was primarily due to rail underperformance, which continues to significantly hinder shipment volumes across all regions, especially in the PRB,” said Kevin Crutchfield, chairman and CEO. “As a result, our second quarter PRB shipment volumes were 1.5 million tons below first quarter levels.”

The year-over-year decreases in both total revenues and coal revenues are primarily attributable to lower average realizations and lower shipments of metallurgical and PRB steam coal. The year-over-year decrease in shipments of PRB coal reflects poor rail performance, Crutchfield explained. The company lowered its PRB guidance to a range of 34 to 37 million tons primarily due to poor rail performance.

The 99-car train carried 70,000 barrels of crude oil to a refinery on the East Coast for the terminal’s anchor shipper, Black Thunder Marketing LLC. All of the train’s tank cars are new and meet the stringent safety standards adopted earlier this year by the American Association of Railroads.

The Black Thunder Terminal basically provides outbound service for crude oil production from Wyoming’s PRB. “The Black Thunder facility is unique because it’s the only crude oil terminal in Wyoming located at a coal mine,” said Meritage Midstream CEO Steven B. Huckaby. “When we formed the joint venture with Arch Coal, our vision was to create a win-win situation for our customers and the terminal partners. We created significant cost savings for our crude oil customers, as well as efficiencies at Black Thunder by successfully repurposing some of the mine property and rail infrastructure for transloading crude oil. It’s a great location in the center of drilling and production activity and a perfect fit for everyone at the table.”

“Partnering with Meritage at Black Thunder Terminal not only helps us unlock additional value of our existing land holdings and infrastructure, but also provides us with a diversified interest in the growing shale oil market,” said Paul A. Lang, Arch Coal executive vice president and COO.

Phase 1 truck-to-train transload service has been fully operational at Black Thunder since the beginning of March. Current transload capacity is 10,000 barrels per day. Construction of Phase 2 high-speed loading facilities is expected to begin later this year. The Phase 2 facility will include up to four 100,000-barrel storage tanks and a 15-car rack system capable of loading 15 to 18 cars per hour. Total loading time is targeted for 15 hours. High-speed loading service is expected to be available in 2015. 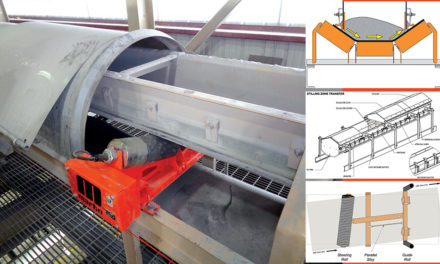 Conveyor Technology: Designing for the Future by Innovating the Present 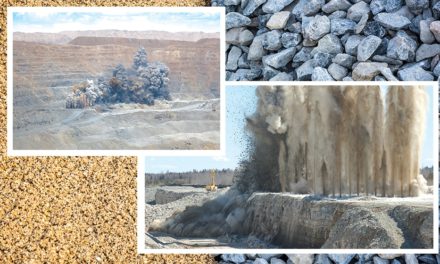 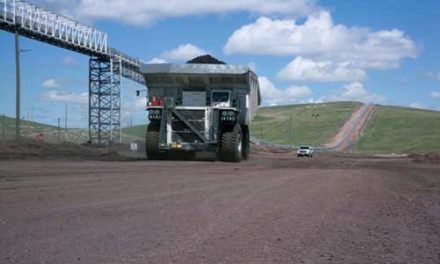