The Iron Mountain mine in southwestern Utah has served as a source of iron ore for many uses during its 160-year history. From the mid-19th century to the early years of the 21st century, its magnetite/hematite ores were first used to forge pioneer-era hinges and hardware, later for wartime steelmaking and then for producing plate, pipe and structural components to support post-World War II building booms.

Despite sweeping changes in both the domestic iron industry, which saw the heart of U.S. iron ore production move to Minnesota’s Mesabi Range in the late 1800s, and the global industry, which massively shifted to an Asia-centric focus in the latter years of the last century, Iron Mountain continued to supply ore to several well-known steel producers. These included Columbia Steel, Colorado Fuel & Iron, and USX up until the mid-1990s when its then owner, the Geneva Steel works in Provo, Utah, encountered financial difficulties that forced that steel producer into bankruptcy and the mine into closure in 1995. It’s estimated that the mine provided more than 88 million tons of ore from 1851 to the year of its shutdown.

Even after closure, however, the property remained attractive — it was, and remains, the largest known iron ore deposit in the western U.S., had access to water rights and power, gas and road infrastructure, and could be connected relatively easily to a major rail route. It was subsequently purchased by a joint venture between Palladon Ventures, a Canada-based, public company, and privately held Western Utah Copper Co. for $10 million in 2005. After the bankruptcy of the previous owner, there was little value remaining on-site and by 2007, the new owners had razed the remaining structures to make room for modernized facilities. However, a series of business and technical hurdles over the next few years kept the project’s recovery schedule rocking on its heels as ownership shares, financing, production strategies, potential customers, and market economics shifted and changed — eventually stabilizing and leading to a concerted effort to develop a viable mining, processing and marketing approach for the mine. The current owners returned it to production in 2010, first supplying crushed ore to market, and now, with the completion of a new concentrator, providing high-quality magnetite concentrates to offshore buyers while preparing for a move into the North American market for high-density media.

The mine is owned and managed by CML Metals Corp. (CML) — formerly known as Palladon Iron Corp., a subsidiary of Palladon Ventures that was set up in 2005 to develop the Iron Mountain project. Palladon Ventures currently holds an approximate 19% share of CML — WUCC dropped out of the project in 2006 — and a fund managed by New York City-based Luxor Capital Group owns most of the remaining interest in CML.

Situated 16 miles west of Cedar City, the property encompasses more than 6,000 acres of private lands and patented and unpatented mining claims on public lands. All orebodies are located on private land.

A project economic assessment conducted by SRK Consulting in 2009 reported NI-43-101 compliant resources of 36.6 million metric tons (mt), containing about 45.3% iron. Of that, 28.4 million mt was located in the closely adjacent Comstock and Mountain Lion deposits and the rest was in the form of stockpiled lower-grade ore (about 33.9% Fe content). Currently, the company reports reserves of about 30 million mt; another 150 million mt are classified as “non-reserve mineralization,” having been identified and drilled but not included in the company’s near-term development plan. The Comstock and Mountain Lion (CML) deposits have been the primary source of ore throughout the mine’s existence. The Rex and A/B deposits to the southwest of the Comstock/Mountain Lion pit are areas of interest that have been surveyed both by aeromagnetic methods and drilling and offer future production opportunities.

The SRK study described the property’s iron mineralization as magnetite and lesser amounts of hematite occurring in the Homestake Limestone member of the Carmel Formation. Mineralization is found in lenticular, stratiform bodies and can be up to 3,900 ft long by 2,000 ft wide with thicknesses ranging from a few feet to approximately 250 ft. These bodies are found in roof pendants suspended in the Iron Mountain laccolith as well as along the flanks of the laccolith. Post mineral faulting has offset the mineralization with displacements of up to approximately 300 ft.

Although the Comstock and Mountain Lion deposits are physically separate from each other, they are close together and both are mined within a single pit. Gilbert Development Corp., a Utah-based earthworks, construction and mining company, handles drilling, blasting, blending and haulage from the pit and from ore stockpiles under contract to CML Metals; CML Metals owns the mine, concentrator and related facilities. Gilbert’s association with the mine goes back several decades, having been the mining contractor for two previous owners — USX, from 1985–87, and Geneva Steel, from 1987–95. In fact, several former Gilbert employees now comprise the core management of CML Metals — including President and CEO Dale Gilbert, COO Sam Paioletti and Mine Manager Penn Leavitt.

The Iron Mountain mine lies in a semi-arid zone that is actually only a couple dozen miles beyond the northern fringes of the Mojave Desert, but at an altitude that brings frequent, sometimes heavy, winter snowfall. According to Leavitt, it’s not uncommon for mining activities to be briefly interrupted during the winter months when some units of the production fleet are assigned, by necessity, to snow removal duty. Leavitt said the miners are used to operating in these conditions and are quick to bring the mine back into operation after big snowstorms.

The overall strip ratio in the active mining area is very low (0.48, waste to ore) and future production will most likely access ore deeper in the pit without need of additional prestripping. The mining method is straightforward: Ore blocks are identified, rotary drilled and blasted, assigned to a blending plan, flagged, and mucked. The broken ore, distinguishable from lighter-colored waste by its dark gray color, is loaded by a Komatsu WA900 wheel loader or PC2000 hydraulic excavator into a fleet of Cat 785 trucks for a short haul to the plant’s primary crusher — a horizontal shaft impactor that reduces incoming ore to 6-in. minus size prior to delivery to a SAG mill. Concurrently, stockpiled “lean” ore from past operations is loaded by another Komatsu WA900 into a hopper and delivered by conveyor to an intermediate stockpile, from which ore is drawn for blending with ore from the pit prior to crushing. The mine maintains a large stockpile downstream from the crusher, serving as both a surge pile during normal operations and an extended source of plant feed when mining operations are interrupted.

In early August, the blended ore head grade to the concentrator averaged between 46.7%–47% Fe with an average recovery of about 98% and a Fe content consistently above 64%.

PREPARING FOR NEW MARKETS
As CML makes further improvements to its plant’s processes, opportunities to explore other markets should open up. “At present, our concentrate easily meets specifications for our main customers, of course,” said Michael Gaylard, acting director of freight and marketing. “Additionally, we are looking at opportunities to further reduce impurities and make the product more attractive to a number of niche markets with very specialized requirements.”

CML operates a 15-mile “short line” rail system from the mine site to a Union Pacific main line. The company built a modern loadout facility in 2008 that is capable of loading a 92-car unit train in about six hours, filling each car with 100 mt of concentrate. It leases four locomotives and more than 500 bulk railcars, and has a car repair team on-site to perform maintenance on the rolling stock as needed. From the interchange point at the main line, Union Pacific handles train traffic to the Port of Long Beach.

Due to a lack of adequate bulk material storage and handling capabilities on the West Coast, CML originally had to ship its product to facilities at Stockton and Richmond, California. Richmond had deeper water, but Stockton had more stockpile capacity, so ships were first partially loaded at Stockton, then topped off at Richmond, but even with that approach it was still necessary to short-load Supramax-class bulk carriers with just 45,000–47,000 tons per vessel. CML eventually made arrangements with a recycling company that had available bulk storage and loading capacity at the Port of Long Beach, allowing it to fully load 80,000-ton-capacity ships at a rate of 20,000 mtpd.

Until recently, about two-thirds of CML Metals’ concentrate production was delivered under off-take agreements to international customers. Export shipments are currently on hold pending improvement of the market.

CML’s management is optimistic about its prospects for developing interest from North American customers for its magnetite, primarily as a supplier of high-quality concentrate for dense-media separation in coal preparation plants. “We are the only operation that is currently mining and producing magnetite concentrate in the U.S. Most comes from Sweden, Chile or Brazil, and it’s not unusual for magnetite end-users to not know the source of their material,” Gaylard explained. “We’re here, in-country, and we produce on a 24/7 basis, which allows us to fill orders consistently and at any time, and doesn’t require a customer to order in large-volume ‘chunks’ because of possible shipping or logistical uncertainties. Because of our rail connections and proximity to interstate freeways, we can deliver anywhere in the U.S. either by rail or truck.

“Additionally, we have the flexibility to meet the moisture requirements of our customers, particularly those that operate wash plants in the eastern U.S. We have the capability to dewater our product, using our rotary kiln dryer, down to 1% moisture content. This is something we can do as part of our normal production process, but for other suppliers, it’s an additional step that has been carried out separately after receipt of the material.”

Plans for upgrade of the Iron Mountain operation are being evaluated, with the principal aim of modifying or adding to plant facilities to make another value-added product. “In any case,” said Paioletti, “we have sufficient resources available to meet foreseeable future demand.” 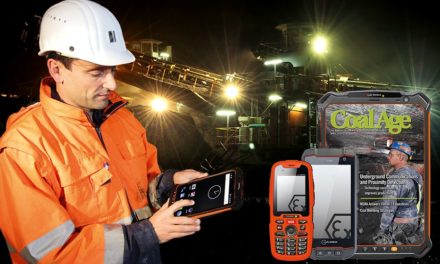