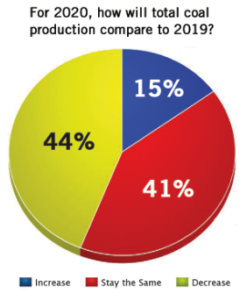 If the current situation does not change, 2020 may be worse

During the first quarter of 2019, most coal operators knew their business was facing a difficult market. With declining domestic demand, U.S. coal operators were clinging to thermal and metallurgical coal exports. By May, however, it became clear that the prices for U.S. thermal coal exports into Europe were softening, which forced some operators to reconsider their options. At the same time, trade negotiations between U.S. and China broke down and the Chinese began to block coal imports, which impacted Australian coal exporters.

The situation was not good, but the metallurgical side of the coal business had not been affected. The other shoe would drop in August as prices for met exports began to soften. Steel production was slowing in Europe, India and Japan, and by year’s end, met coal 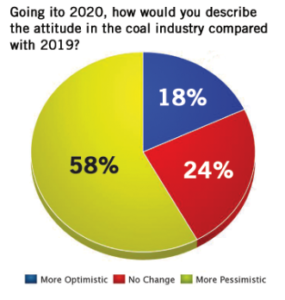 prices had fallen from more than $200 per metric ton (mt) to $136/mt. While traders have debated whether prices greater than $200/mt were sustainable for some time now, coal operators had grown accustomed to those levels and no one expected the drop to be that steep, that quick.

Market fundamentals were clearly not working in favor of the coal business. Prompt prices for Central Appalachian (CAPP) thermal coal, which climbed to $81.40 ton by the end of 2018, fell to $60.30/ton at the end of 2019. While the final figures were not available, it appears as though U.S. coal production in 2019 dropped 50 million tons (6.8%) year-on-year to 706 million tons from 756 million. Most of that decline happened in the western U.S., where coal production in Wyoming alone declined 31 million tons.

At first blush, the situation in the U.S. looks grim, but 700 million tons is still a considerable amount of coal. The market outside the U.S. ranges from brisk in 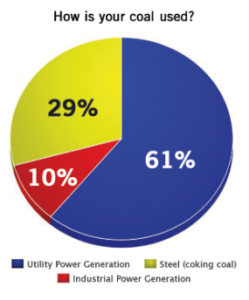 India, Indonesia and Russia to somewhat sluggish in China and Australia to depressing in South Africa. While it seems that most of the U.S. headlines are related to coal bankruptcies, there are regions and companies actively involved in coal mining that are doing well. To get a handle on the situation, Coal Age surveyed 500 executives and asked them how they feel about the future. That information was combined with publicly available reports to produce the 2020 Annual Forecast.

Coal Age contacted 500 professionals who mine and process coal, and received 52 completed surveys. The results reaffirmed the previous market share discussion. Most of the respondents (64%) produced bituminous coal. Subbituminous, lignite and anthracite accounted for 15%, 12% and 7%, respectively. As far as production capacity, most of the respondents represented large mine operators (more than 5 million tons, 57%), followed by medium-sized operators (mining 1-5 million tons, 22%), and the 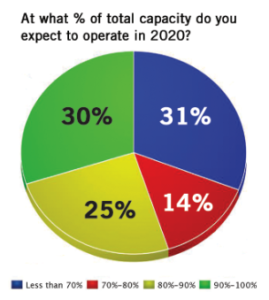 small (less than 1 million tons, 21%); 30% described themselves as surface coal operators exclusively, while 42% said they only operated underground mines. The remainder (28%) said they worked for a company that mined coal using both surface and underground techniques.

Going into 2020, the survey revealed that the coal operators’ mood had darkened. A total of 58% (vs. 11% last year) described their attitude as pessimistic, and far less were optimistic (18% vs. 63% in 2019). This year, 24% said they expected things to remain the same, compared to 34% last year. The overall outlook, especially in the U.S., is grim. 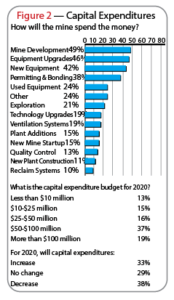 Coal mining is a capital-intensive business. For 2020, only one-third (33%) of the respondents said their capital budgets would increase, compared to 54% last year. The number of respondents saying their capital budgets would decrease was 38%, which was considerably higher than the 12% response in 2019. The rest of the respondents (29%) said their budgets would remain the same, compared to 35% last year. While the industry faces distress, nearly two-thirds of it (62%) see their budgets either staying the same or increasing over 2019.

When asked about what specific issues will affect the coal industry most in 2019, Politics & Policy registered the highest score (4.56/5) as the leading concern. This was followed closely by Prices and Power Plant Regulations. Coal prices remained ahead of the economy. Reading between the lines, the miners are saying that prices and the economy do not matter if their customers are not allowed to burn coal. Limited production capacity and a retiring workforce were the least of their concerns. 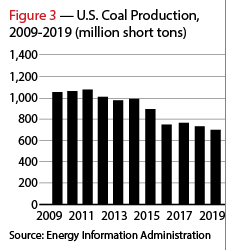 A Market in Flux

As this edition was going to press, Alliance Resource Partners (ARLP) had just released it fourth quarter earnings report. One of the best U.S. coal operators, it has an enviable safety record and balance sheet and its situation provides a snapshot of what’s happening to the U.S., east of the Mississippi River. It has exposure to Illinois Basin (ILB) and Appalachian markets. This time last year, the company was reporting record financials and its 2019 guidance on coal sales was 43.5 millon to 45 million tons with 8 million tons destined for the export market. It didn’t pan out. The company reported 2019 coal sales of 39.3 million tons with exports falling 4.2 million tons. 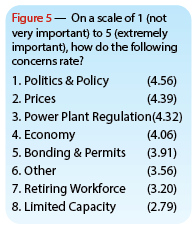 That reduced export volume along with tepid domestic coal demand due to persistently low natural gas prices caused a significant oversupply in the U.S., Craft explained, creating additional pressure on coal prices and producers. “We continue to believe that current market conditions are unsustainable for most of ARLP’s competitors,” Craft said. “Accordingly, additional supply rationalization is necessary. ARLP anticipates that much of this market correction will occur this year, making 2020 an inflection point for domestic thermal coal producers. In this fluid environment, we have adjusted our coal operations to reflect the realities of the current market.” The 2020 guidance is 36.8 million to 38.8 million tons of coal sales with at least  900,000 tons in exports.

In 2019, ARLP picked up 2.8 million tons in domestic market share from mine closings in the ILB. “We believe the pressure on other operators is increasing as the domestic thermal coal headwinds persist,” Craft said. “As competitors assess their options, we stand ready to pursue strategic transactions that may provide opportunities to capture additional market share this year.” 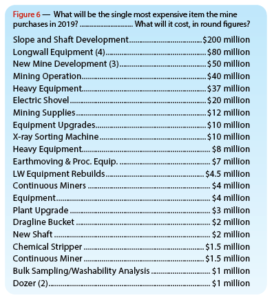 As a large multinational coal operator, Peabody Energy has exposure to many markets, including Australian exports and U.S. thermal, including Wyoming’s Powder River Basin and bituminous operations in the ILB. In its third quarter earnings statement (the most recent available), the company noted that average seaborne hard-coking coal spot prices declined approximately 20% quarter to quarter. At that point in early October, they were expressing relief that seaborne coking coal prices into China had rebounded from three-year lows. They also singled out India, saying it continued to increase metallurgical coal imports, with September year-to-date imports rising 7%.

Citing similar influences on the export market, they also reported that Indonesian and Russian exports had increased, contributing to a weaker pricing environment. At the time, the average Q3 Newcastle-spec prompt price was $68 per metric ton (mt), a 15% decline compared to the Q2 average. More recently, the company revised its seaborne thermal guidance for 2019 to 11.5 million to 12 million mt and seaborne met guidance to 8.5 million to 9 million mt. In 2018, the company’s seaborne thermal was 19.1 million mt and its seaborne met was 11 million mt.

For the U.S., Peabody explained that electricity generation had decreased and coal was losing more market share to natural gas. It revised its ILB guidance down to 16 million tons for 2019. It was 18.9 million tons in 2018. Production from its three PRB mines (Caballo, North Antelope Rochelle and Rawhide) in 2019 totaled 108 million tons, an 11.1-million-ton decrease over 2018, and a little more than a third of the previously announced 31-million-ton decline for Wyoming. 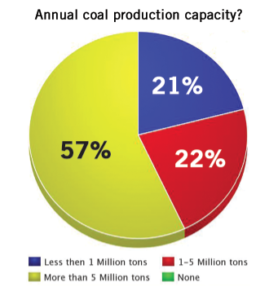 The other important U.S. market is the northern Appalachian market and the leader in this region is CONSOL Energy. During his third quarter presentation, President and CEO of CONSOL Energy Jimmy Brock acknowledged the same market concerns. He credited the company’s strong performance to its contracted position and the continued desirability of its product.

“This has been an increasingly tough year for our industry,” Brock said. “The good news is that we have positioned ourselves to weather this storm. We moved early to contract our coal and are now 82% contracted for 2020 at attractive prices compared to the current market.” Brock also said he sees further supply rationalization in the marketplace.

These three American coal companies provide a glass-half-full perspective. They have a strong balance sheet and contracted positions. They also acknowledge that it’s bad out there. Peabody Energy and CONSOL Energy will release Q4 2019 reports soon and the results will likely follow the same lines. For the other side of story, the pages of Coal Age are littered with distressed coal companies that will not likely weather the storm. 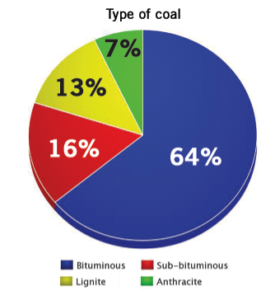 During mid-January, the U.S. and China signed Phase 1 of a trade deal. S&P Global Platts reported that Beijing pledged to buy more metallurgical coal in the next two years from the U.S. As part of the interim trade deal, China has agreed to purchase $200 billion worth of U.S. goods and services over the next two years. China plans to boost its imports of U.S. energy sources, according to S&P Global Platts, including LNG, crude oil, refined products and coal by $18.5 billion in 2020 and $33.9 billion in 2021.

No one expects much to happen until tariffs are removed. Currently, U.S. metallurgical coal exported to China are subject to a 25% tariff and a 3% import tax, which was imposed in 2018 as the trade dispute between the two intensified. 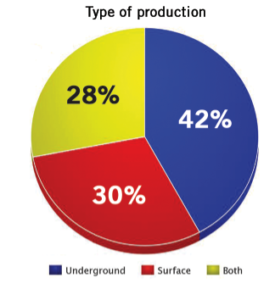 In addition to the oversupplied market domestic coal producers face, the U.S. Congress reinstated for 10 years a $0.60/ton tax on underground coal production that expired at the beginning of 2019 when it passed the American Miners Act of 2019. If everything remains the same, it will be difficult for U.S. coal operators to maintain the current 700-million-ton production level.