Hard rock miners commonly bore raises between levels underground, and now Raisebor, a division of Cowen & Co., has successfully used the technique to develop a shaft at a deep coal-mining operation in Alabama. Above: the Raisebor team in the foreground, the raise boring drill in the background.

Raisebor engineers the largest diameter raise in the Alabama coalfields

On December 7, 2014, Raisebor, a division of Cowin & Co., completed a 26-ft-diameter raise bore shaft to a depth of 1,440 ft, the largest diameter raise bore ever in North America, and appears to be the largest in the world. Raisebor performed the record-setting feat at the Jim Walter Resources No. 7 mine near Brookwood, Alabama, using an Atlas Copco Robbins 123R C raise boring machine and multimodular wing system (MMWS) reamer. The reamer was designed for this job in a collaborative effort with Atlas Copco design engineers.

The project started in 2009 when Rick Sidwell, general manager of Raisebor, started thinking about a larger raise bore. He knew the drill for this job needed to be special. “I see the industry going this way. It’s a safety factor that just makes sense,” Sidwell said. Years of planning and engineering followed.

The mine was sinking this shaft to offer miner and utility access closer to the working face. It was taking workers roughly an hour to reach the working face. Nearly 25% of each 8-hour shift was lost to commuting. The shaft was needed to make the mine more efficient. 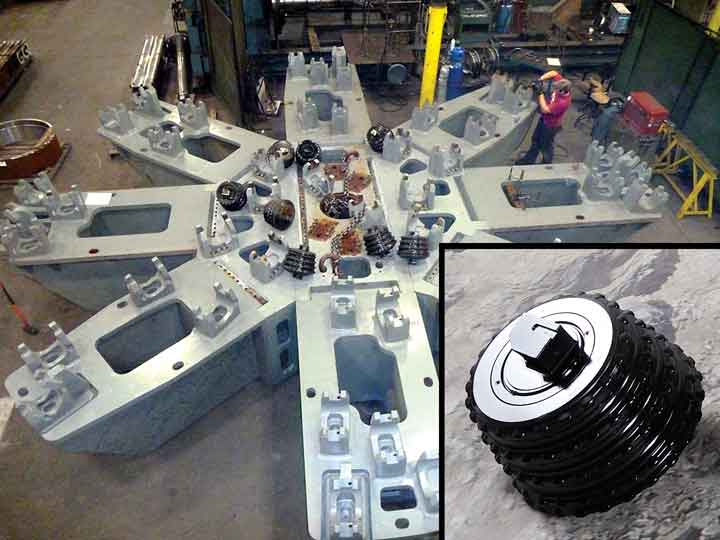 The reamer was assembled on the surface custom to Raisebor’s specification, disassembled, taken underground and reassembled. Inset: Atlas Copco Secoroc cutters for the raise bore reamer.

The 1,440-ft-long, 26-ft-diameter raise was actually the third project for the company’s Atlas Copco Robbins 123RH C raise boring machine. Two earlier, 20-ft raises were just enough for the crew to stretch its legs and get ready for the big pull.

The project was made more complicated than a typical raise by its size. The rebar-reinforced foundation for the drill was a massive 32-ft-deep concrete box built by Cowin & Co. at the surface that required the removal of 2,500 cubic yards of material prior to building the platform. The drill straddled an open box’s 1-ft-thick concrete liner, which was drilled out when the raise bore’s head reached the surface.

Drill operator James Bass said there is more power behind the 123RH C compared to other units he has used in the past. “I can feel more power and better control. And when I make a correction, there’s almost an anticipation of my actions. I can feel the changes in the formation as it happens and change the drilling parameters smoothly and as necessary.”

The formation’s high angle fractures with varying changes throughout the formation made it difficult to ream. “Because the head is so wide, I could be pulling though hard and soft formations at the same time,” Bass said. “Pulling slowly through it, though, I can feel the torque change. The rpm and force show constantly on the control panel, and I hear and feel what needs to be adjusted more than I see it.” 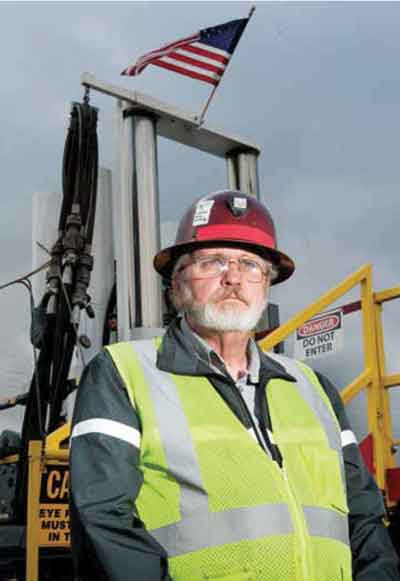 Average drilling parameters put 2.5 rpm of head rotation at the pipe. The average thrust was from 350,000 to 700,000 lb, with torque at or below 350 klbf. The system operates off two hydraulic systems, with RCS-based monitoring, for high machine availability.

Drilling operator Eric Todich agreed with Bass’s assessment of the controls, and said, “The reaction with the 123RH C raise drill is quicker, yet it takes time to adjust after the command. This is almost a safety factor.” He said the control allows for adjustments in the formation as needed, so there isn’t damage to the drill or drill string.

The machine’s anti-jamming feature also prevents damage. When rotation pressure moves into the red range on the control panel, rotation backs down. “The programming on this drill is really Johnny-on-the-spot accurate,” said Bass.

At one time there was a 20-ft-long, 5-ft-thick rock that broke free from the face, causing a delay in drilling. It took time to lower the cutting head and replace cutters that were smashed, but people were never in harm’s way.

Drill superintendent Willy Hicks said the drill performed well throughout the project. He gave quite a bit of credit to the operators who kept an eye on the controls and made the process look easy. 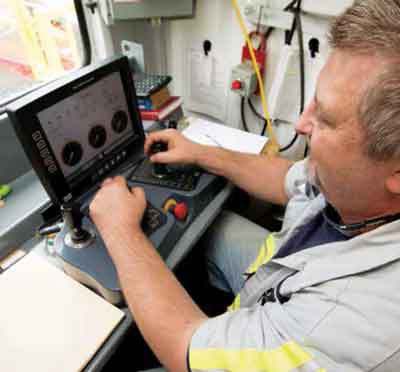 On average, the drill advanced at 5.5 in. per hour, but formation changes made drilling speed inconsistent. The formation could show a foot of coal then 4 in. of sandstone. In a 24-hour period, two shifts might have 8 to 10 ft of advancement. This was a little ahead of the preplan estimates of 3.7 ft per shift or 7 ft per day. Drilling advanced better than projected throughout the project.

“This is an amazing piece of equipment, with its rod handling system,” Hicks said. “The old way we had to move pipe with a chain hoist, now we have a modern rod handler. It grips the pipe up to 2,000 psi to thread on the connection.”

The design of the MMWS reamer, nicknamed the “Moose,” was based on the largest existing reamer in Atlas Copco’s raise bore tool line. It consists of a 48-in.-wide core and two 48-in.-wide intermediate wings. Up to eight outer wings extend the cutting capacity to 26 ft.

The outer wing design was intended to allow efficient cleaning of the head, which uses five-row Standard Magnum cutters paired with 1-in. spacing. The wings were designed to be removable to make underground transport easier. It can be operated with as few as four wings. Raisebor discovered that six wings were optimal for keeping the head clear of rock buildup.

The 14.1-in. Atlas Copco Secoroc cutters weigh more than 400 lb each. Of the 50 cutters used, 35 went the distance. The 15 that needed to be replaced were only changed because they had been damaged by the large rock fall on the head.

For Sidwell, the objective throughout the project was not to lower the head unless absolutely necessary. The process could have taken two weeks of advancement because tripping up and down would take that much time. 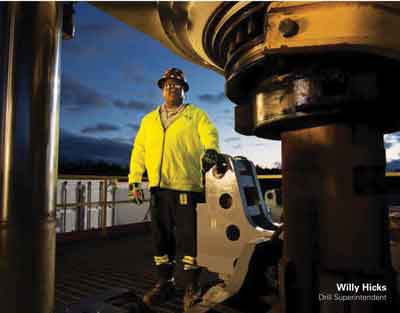 Sidwell worked with Atlas Copco to develop the head. “Atlas Copco respected my input. We discussed what needed to be done to make it better. We put extra wing cutters where I felt they were required and I appreciated the flexibility demonstrated by Atlas Copco.”

The cutting face is so wide that for each rotation of the inside cutters, the outside cutters will rotate 22 times.

However, the cutters showed little wear regardless of location on the face. Rotation speed can be set at the control from 0 to 50 rpm while the pilot is drilling and from 0 to 7 while reaming. The crew found the sweet spot to be 2.5 rpm while reaming the shaft.

Vent holes were drilled parallel to the 15-in. pilot hole for two reasons. First, since the raise bore drill cut through multiple coal seams on its way to the surface, so it was important to ventilate it and flush water over the cutters to suppress sparks that could light methane gas. Water also cooled the cutters.

Secondly, within 300 yards of the new drill shaft, large intake fans were sending thousands of cubic feet of air per minute to the face of the mine’s workings. With the addition of the vent holes, air drawn down the holes by the intake fans increased gas ventilation. Prior to breaking through the surface, these fans were regulated down to prevent a large influx of dust.

The Mine Safety and Health Admin-istration regulation was for less than 1% methane on the bit face. To dilute the potentially hazardous gas in the coal seams, air from portable compressors was used in addition to supplement the mine’s ventilation system, sending air at 1,700 cfm down the annulus of the drill string.

About the Article
This article was provided courtesy of Atlas Copco; it was first published in the company’s Mining & Construction magazine. 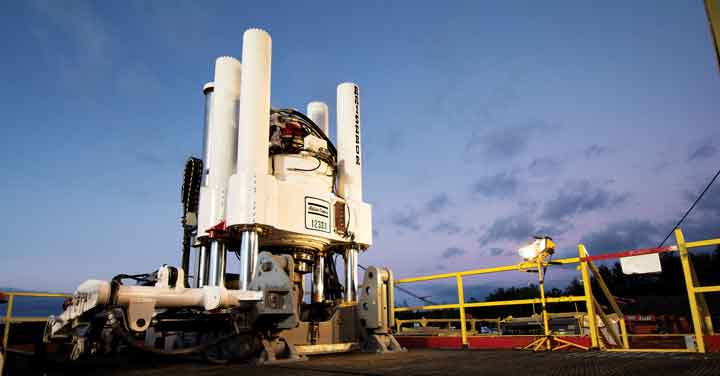 Using a pilot hole, the raise boring drill pulls the reamer upward letting cuttings fall to the bottom of the raise. A scoop is used to clear the cuttings below.