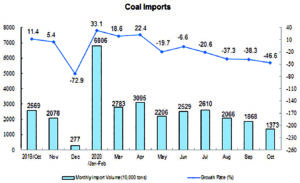 According to China’s National Bureau of Statistics, coal imports have declined monthly since July.

China imported a total of 253.16 million metric tons (mt) between January and October, compared to the 299.67 million mt of coal it imported in 2019, an 8.3% decrease, according to the National Bureau of Statistics of China.

In the first half of the year, the country saw record arrivals as the world’s biggest coal importer bought less fuel from Australia. The slowdown in purchases also comes as the country nears an informal import quota, after authorities instructed traders and downstream users to maintain total 2020 imports around the 2019 level to shore up the struggling domestic coal industry.

China brought in 13.73 million mt of the fuel last month, according to data from the General Administration of Customs, down 47% from 25.69 million mt in October 2019 and 26% lower than in September. The country imported a total of 253.16 million mt between January and October, compared to the 299.67 million mt of coal it imported in 2019. The data comes as China has reportedly told its traders to stop buying seven categories of Australian goods ranging from coal to wine since last month.

Australia supplied more than 40% of China’s total coking coal imports and about 57% of its thermal coal in 2019.

China imported almost twice the amount of coking coal from Mongolia in September than from Australia, according to Chinese customs data.

Aquila to Sell Stake in Coal Assets to Sumitomo