Using contour strip and auger mining methods, the company is initially targeting the Elkhorn 3, Elkhorn 3 Rider, and Elkhorn 2 coal seams, with a potential to also extract coal from the Hazard 4 coal seam at a later date. These coals have a high calorific value and they are low sulfur (less than 1%), except for the Elkhorn 3 seam, which has a sulfur content of 1%-2%. While Quest has attractive orders for this coal on the thermal market, the company is also evaluating other specialty markets for the coal, such as PCI or met blend, which may command a premium to the thermal market.

“We are very excited to get this surface mine into production,” said Mark Jensen, chairman and CEO, Quest Energy. “Not only does it allow Quest to provide its customers with a wider variety of coal qualities and specifications, but it also diversifies the company’s revenue base. With approximately four to five years’ worth of contour and auger work ahead of us with this mine, we look forward to this mine being a meaningful contribution to the larger Quest operations for the forseeable future.” 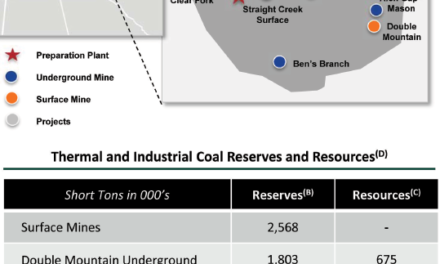