Spokeswoman Amy Rutledge said in September her company decided to take the “proactive approach” to preserve coal stockpiles after rail deliveries to the utility “slowed to two or three times longer than usual” in late summer. BNSF, she said, “had done a pretty good job through the spring in getting us caught up, but within the past couple of months we’ve seen this slowdown again.”

She added “this is really the first time in history” Minnesota Power has taken such action. “In the old days, you could call up [BNSF] and say, ‘Hey, I need another shipment, another trainload of coal.’ But with congestion on that system, it is just not possible to do that.”

The utility’s intent by taking the four units offline, she said, is to amass enough coal at Laskin and Taconite Harbor so that the units will be available to run during Minnesota’s typically harsh winter.

According to Minnesota Power Vice President of Strategy and Planning Al Rudeck, the railroad blamed system congestion and adverse weather in early 2014 for shipping difficulties this year. Other observers have pointed to a record grain harvest in the upper Midwest this year that, at least temporarily, has diverted some railcars away from coal. A BNSF spokeswoman said the railroad is aware of the coal shipping problem and is working to correct it.

Whatever the reasons for the coal delivery delays, Minnesota Power’s 144,000 customers can take some solace in the fact that the utility’s largest power plant, 1,000-megawatt Boswell at Cohasset, Minnesota, is continuing to operate with no downtime anticipated this winter.

“Boswell will continue to run,” Rutledge said. That will happen over the next few months even if Minnesota Power is forced to divert some coal shipments from its other plants to Boswell. “Boswell is our least-cost generation source. It is obviously a key facility for us when it comes to generation. Compared to our smaller units, it’s more economical to run Boswell,” he said.

Last year, Minnesota Power announced plans to convert Laskin to natural gas under a project scheduled to start in 2015. One of Taconite Harbor’s three coal units will be retired to comply with federal Environmental Protection Agency (EPA) rules. But the utility insists the current idlings are not a prelude to permanently shutting the plant’s other two units.

Minnesota Power is evaluating the installation of “modest controls” on Boswell units 1 and 2, the plant’s smallest units with a combined generating capacity of 140 megawatts as part of a settlement with the EPA, and a final decision is expected by the end of the year. The utility already is adding scrubbers on Boswell units 3 and 4, its largest units. 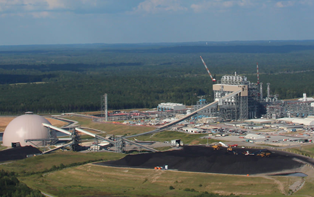 CONSOL Energy Sued Over Mine Discharges into Creek