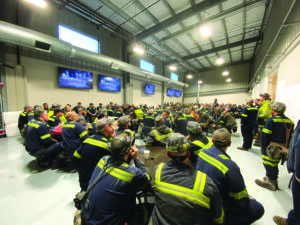 Day shift gathers at the Leer South mine.

Arch Resources reported net income of $407.6 million for the second quarter of 2022, record net income for the third straight quarter. The company reported a net income of $27.9 million during the second quarter of 2021. In addition to achieved record coking coal realizations during the quarter, the company reduced its total indebtedness by $135.8 million, or 42.1%, resulting in a net positive cash position of $94.9 million.

Arch generated strong margins in both its core metallurgical and legacy thermal segments during the second quarter despite ongoing rail service disruptions, mounting inflationary pressures, and isolated geologic issues in its coking coal portfolio, explained Arch COO John Drexler. “Even with localized, tougher-than-expected cutting conditions in the second panel at Leer South, the metallurgical segment continued to build coking coal inventories during the quarter,” Drexler said. “With 1.1 million tons of high-value coking coal in our mine and port stockpiles at quarter-end and the expectation of much-improved geologic conditions at Leer South beginning in late August, we fully expect to capitalize on still-strong market conditions as rail service recovers.”

Despite a sequential stepdown in shipments during the second quarter, which is typically the weakest shipping period of the year in the Powder River Basin, Arch said its legacy thermal segment again generated robust amounts of cash.

While global metallurgical coal markets have softened considerably in recent weeks, coking coal prices remain at exceptionally strong levels in historic terms. Arch’s primary product, High-Vol A coking coal, has dropped to $249 per metric ton (mt) on the U.S. East Coast. The principal driver behind the recent erosion in coking coal market dynamics, Arch believes, is slowing economic growth across most of the world, which is having the predictable knock-on effect on global steel markets.

However, Arch sees other market dynamics that are acting to support global coking coal markets at present. The first of these is still-weak coking coal production and shipping levels globally. Coking coal exports out of Australia — traditionally the source of more than 50% of seaborne coking coal supply — continue to undershoot already weak 2021 levels, with export volumes down approximately 5 million tons, or roughly 7%, year-to-date. Additionally, the war in Ukraine threatens to trim Russian coking coal export levels, particularly once the EU’s ban on Russian coal imports takes effect in a few weeks. Elsewhere, U.S. and Canadian export levels are up only modestly year-to-date, despite exceptionally strong pricing levels through the year’s first half.

Another potential support mechanism for the global coking coal market is a still-strong international thermal market. The price for thermal coal in Australia is currently around $415/mt, and the thermal price in northern Europe stands at approximately $390/mt. As a result of that nearly unprecedented negative spread between metallurgical and thermal prices, Arch recently sold a vessel of its High-Vol B coking coal to a European thermal customer for delivery in the fourth quarter at a price significantly above the U.S. East Coast metallurgical marks, and is actively exploring other such opportunities.

In addition, Arch continues to capitalize on exceptionally strong international thermal market conditions directly through the export of thermal volumes from its West Elk and – to a lesser extent – Black Thunder mines.  While rail service remains a significant barrier to moving additional volumes to energy-short international customers, Arch still anticipates shipping an incremental 600,000 tons of West Elk coal and nearly 500,000 tons of Black Thunder coal into international markets in the second half of 2022 at exceptional price levels.