In 1966, the USSR’s Luna 9 made the ﬁrst rocket-assisted landing on the moon, The Cultural Revolution began in China, England won the World Cup and the Rolling Stones rock band was banned from 14 New York hotels. It was a turbulent year. With so much going on, it may have been easy to overlook the launch of the DR631, marking the birth of the ADT. Essentially, that truck was a combination of an agricultural tractor (which Volvo then made) and a trailer, permanently joined via an articulating hitch and with the front axle of the tractor removed. Nick-named “Gravel Charlie,” it could manage only a 10-ton payload, and its popularity grew slowly with early sales conﬁned to the Swedish market.

One year after its launch, the company introduced the DR860, the ﬁrst ADT with a bogie, allowing the material being carried to remain level and stable to reduce spillage as the wheels coped with highly uneven road surfaces. The ﬁrst hauler with a turbo-charged engine, the DR860T, arrived in 1970 and in 1979 the launch of the 5350 introduced a truck capable of 50 km per h — a top speed previously un-heard of — via its suspended front axle and an automatic transmission. Traction was further increased with the addition of a six-wheel-drive system. The A20 was launched in 1986 with a 200-hp engine and a 20-ton payload rating, followed in 1987 by the 35-ton A35, which featured a retarder built into the transmission to reduce wear on the service brakes.

The range was given a major overhaul in 1993 with the introduction of the C-Series, which included a low-emission engine, fully automatic transmission and 100% differential locks. The A40 40-ton class hauler was launched in the mid-1990s, with a 400-hp engine and oil-cooled wet disc brakes.

Volvo CE’s D-Class articulated haulers entered the market in 2000, covering a payload range of 24 to 37 tons. For the ﬁrst time, diagnostic electronics were integrated into these models to alert both operator and technician of problems. Developments such as Automatic Traction Control (ATC) relieved the operator from have to manually activate differential locks and drive conﬁgurations as driving conditions change. Multiple sensors checked the speed differences within the driveline and selected the best drive combination for the conditions. These features, according to Volvo, reduce tire wear, driveline stress and fuel consumption.

In 2007, Volvo CE introduced hydraulic suspensions with automatic levelling and stability control on all wheels. The Full Suspension variant allowed the truck to travel at much higher speeds even when fully loaded, without bouncing and rolling. These beneﬁts, according to the company, increase with the length of haul road, effectively absorbing all rough spots and allowing operators to maintain considerably higher average speeds with or without a load. A hauler traveling at 55 km/h over rough haul roads was now possible.

The F-Series arrived in 2010, comprising haulers that met the standards demanded by Tier 4i (US) and Stage IIIB (Europe) emissions legislation, and also featured a package of improvements in functionality, design, and maintenance. The F-Series now included the company’s CareTrack as standard — a telematics system that enabled remote monitoring of a wide range of machine functions (e.g., location, fuel consumption, service reminders, etc.).

The G-Series debuted in 2014, meeting Stage IV/Tier 4 Final emissions regulations and bringing new features. The oil-cooled wet multiple-disc brake concept used on the A35 and A40 models was added to the A25G and A30G. Larger models in the range were also offered with Volvo’s onboard weighing system, which tracks weight and relays information to software integrated into the machine’s electronics. Indicator lights tell the hauler operator, as well as the operator of the loading unit, whether the hauler is at part or nominal load or whether it has been overloaded.

The H Series, launched earlier this year, is Volvo CE’s answer to a growing demand among customers for articulated haulers with larger payloads. This series includes the 60-ton (55-mt) capacity Volvo A60H — which the company claims is the largest articulated hauler of any brand to hit the market.

Volvo CE says that the A60H’s higher payload, representing a 40% increase over its previous largest hauler, signiﬁcantly lowers the cost-per-ton ratio for customers — and also offers a viable alternative to rigid dump trucks in conditions involving soft, uneven ground and/or steep roads, allowing a similar amount of material to be hauled in a shorter cycle time.

Forming an Alliance with Cat, Ritchie Bros to Acquire IronPlanet

Ritchie Bros. Auctioneers has formed a strategic alliance with Cat. Under the terms of the agreement, Ritchie Bros. will become Cat’s preferred global partner for live onsite and online auctions with respect to used equipment, and will complement Cat’s existing dealer channels. Ritchie Bros. will provide Cat and its dealers with access to proprietary auction platforms, software and other value-added services, thereby enhancing the exchange of information and services between customers, dealers and suppliers.

At the same time, Ritchie Bros. announced its plans to IronPlanet, an online marketplace for used heavy equipment, for $758.5 million, subject to customary closing adjustments. Founded in 1999, IronPlanet complements Ritchie Bros.’ primarily end-user customer base, as it focuses largely on the needs of corporate accounts, equipment manufacturers, dealers and government entities in equipment disposition solutions.

“This transformative transaction is the logical next step for Ritchie Bros.,” said said Ravi Saligram, CEO. “We will create a combined company of trusted brands with the ability to provide customers around the world with a greater number of choices and platforms to sell, buy and list equipment when, where and how they want — whether on-site or online.” Cat and its dealers own a stake in IronPlanet.

Cisco and IBM are pursuing a global collaboration to provide instant Internet of Things (IoT) insight at the “edge of the network,” enabling operations in remote and autonomous locations to tap into IBM’s Watson IoT and business analytics technologies and Cisco’s edge analytics capabilities to better understand and act on critical data on the network edge.

In a press statement, the two technology companies noted that today billions of interconnected devices and sensors are gathering vast amounts of real-time data about the physical world. In recent years cloud computing has offered companies a powerful way of storing that data and turning it into valuable insight. But for businesses without easy access to high bandwidth connectivity, these capabilities are sometimes out of reach or take too long. To address the problem, IBM and Cisco have joined forces to offer a new way to produce immediate, actionable insight at the point of data collection. The new approach is designed to target companies operating on the edge of computer networks such as mines, where time is of the essence but bandwidth is often lacking.

By coming together, IBM and Cisco said they are taking powerful IoT technologies the last mile, extending Watson IoT from the cloud to the edge of computer networks in order to make strong analytics capabilities available virtually everywhere.

For example, workers in remote environments will now be able to better monitor the health and behavior of critical machinery and more accurately plan for needed maintenance and equipment up- grades. By tapping into the power of the IBM Watson IoT platform and Cisco edge analytics, these companies can adopt the latest approaches to condition based maintenance through which equipment is monitored in real-time, potentially helping reduce maintenance costs by up to 50% and increase productivity by as much as 25%.

In a recent blog post, Maciej Kranzt, vice president of Cisco’s Corporate Technology Group, explained how the concept of “fog” computing and analysis will be vital in handling the ﬂood of data from IoT sources.

According to Kranz, “The world is awash in data, and 90% of it was created in the last two years. In fact, every day we create 2.5 quintillion bytes of data and that number is growing exponentially. The explosive growth of the Internet of Things (IoT) promises to add to this data glut, with 40% of all data coming from sensors by 2020. Today, a jet engine may generate 1 terabyte of data in a single ﬂight, and a major global retailer collects 2.5 petabytes of customer day each hour. Yet 99.5% of all this data is never used or analyzed.

“The Internet of Everything (IoE) has enabled a plethora of real-time, high-data-rate applications that require a new approach, which we call “fog.” By extending cloud capabilities to the edge of the network, fog computing moves analytics to the source of the data, enabling real-time processing and instantaneous action. Rather than moving massive amounts of raw data, the fog system sorts and indexes the data locally, and sends just alerts and exceptions back to the cloud,” he explained.

“The move toward fog analytics is well under way. In a recent survey of IT and operational technology (OT) professionals, 37% of respondents said that within three years, ‘most’ IoT data will be processed locally, at the edge of the network.

“Fog analytics will require a ﬂexible network architecture, where some elements, such as policy, reside in the cloud while real-time data processing functions move to the edge,” according to Kranz. “Less time-sensitive data can still go to the cloud for long-term storage and historical analysis. Other requirements include standardization
of device and data interfaces, integration with the cloud, and a scalable policy infrastructure.”

From the oldest to the newest: Volvo Construction Equipment’s first articulated dump truck (top), nicknamed ‘Gravel Charlie’ and rated for just 10 tons of payload; and the A60H (bottom), the company’s newest model, claimed to be the largest articulated hauler with its 55-mt capacity. 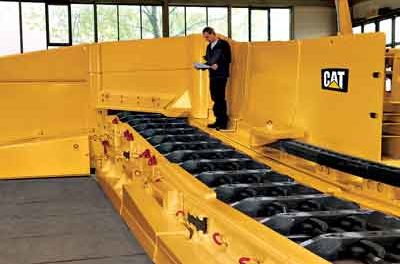