A Boart Longyear drilling team rose to the challenge as it bore down into the earth to create a ventilation shaft for an underground longwall coal mine in southwest Wyoming.

The task? Guide a 60-inch bit to a depth of 550 feet through a challenging geological formation that included two aquifers – all in just over four weeks. Not only did they get it done, but they did so several days ahead of their deadline despite project start-up delays.

The key to their success? The dual-tube flooded reverse-circulation drilling technique, which allowed the extraordinary bit to penetrate loss circulation zones that precluded the use of a more traditional raised bore rig. The technique pumps air through the outer tube and forces mud and cuttings upward through the inner tube, preventing them from plugging porous rock formations.

Working around the clock in rotating three-member crews, the Boart Longyear Salt Lake City Rotary Drilling Services team used an LMTM200 top head drive rig fitted with stabilizers and the massive bit. To minimize the risk of a mine entry collapse, the borehole was drilled off to the side of the mine tunnel and a 54-inch casing with 1/2-inch wall thickness was installed and cemented in place. Underground mine crews then mined over and punched through the concrete to open up the shaft.

“What our team accomplished was absolutely remarkable,” said Jason Lamb, U.S./Mexico territory contract manager at Boart Longyear. “Drilling such a large-diameter hole through loss circulation formations in a single pass — and in less than a month and a half — is something few companies are capable of performing.” 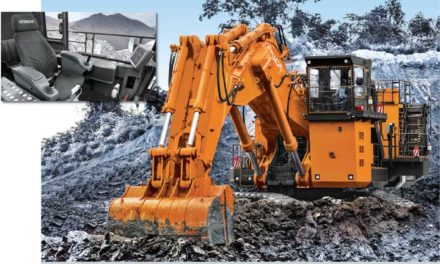