“Troubleshooting conventional longwall electrical systems took a long time,” said Mike Kelly, marketing  manager, Line Power. “Using the DTS system, one person can pull the draw-out tray, troubleshoot, and most of the time, fix it on the spot. Or, they install a replacement tray, reset the parameters and get back to mining coal; which saves time and money.”

The DTS feeder circuit protector has been engineered for high voltage (4,160 volt) applications. In addition to the draw-out tray, the system also consists of mine duty transformers, PLC functions with touch screens and a unique enclosure. “The enclosure creates a chimney effect for cooling the transformer bay, which makes them operate more efficiently,” said Brian Harris, director of communications, Line Power. “The draw-out tray contains all of the 4,160-volt vacuum contactors and control components.”

The layout of the touch screens clearly shows what component failed and where, reducing troubleshooting time. “We are the first to design in the MSHA automatic test circuit.” Kelly said. “Weekly, the electricians have to test each circuit on the lid switches for continuity. It’s a required test that ordinarily takes two people about six to eight hours per unit. With the new automated test circuit and the PLC program, one person can do it in 15 to 30 minutes.” MSHA likes the system too because it reduces inspection times, Kelly explained. That essentially frees up an electrician for a day to do something else.

Line Power uses miter core transformers. They are obviously more efficient, Harris explained, and they also reduce power losses in the transformer. “The standard transformer uses a core constructed from rectangular pieces of steel which have been cut straight and butted together at 90˚,” Harris said. “When that electrical circuit or flux is created, it has to cross that 90˚ corner. We cut the corners as miters and step-lap the cores so that every piece of the core steel fits together perfectly in a miter. The electrical efficiency of the flux is increased. The small energy savings quickly pays for the slight increase in transformer cost, and the transformer runs cooler.”

Over time, a typical 2,500 Kva transformer used in an industrial setting will pay for itself in energy savings in about three years. “The savings in core losses, or the amount you lose energizing the core, are enough to pay for the transformer in a few years,” Harris said.

“The magnetic flux flowing through a traditional transformer with a 90˚ corner must jump a gap between laminations Kelly said. “With the mitered and step-lapped design, the flux stays within the core steelbecause it has an uninterrupted path in magnetic steel, which also keeps it running cooler and quieter.”

Most mines rebuild the electrics with every longwall move. “If the miners do not destroy the enclosure during the longwall move, these units can be rebuilt for many years. The return on investment is very high because of long equipment life,” Harris said. “Typically, after the first panel, they send them out for a clean, sweep and repair. Then they test every component and screen. Each component replaced has to be tested again.”

Line Power has already begun development on the next generation of the DTS motor starter, and the DTS vacuum circuit breaker (VCB). “We have taken the Line Power VCB that has been used for 20 plus years and we are building it into a similar draw-out tray configuration,” Harris said. “For a maintenance person to work on a VCB, they no longer have to crawl all over the unit. We have taken that one step further with a drop down panel on the low voltage side of the VCB so the electricians do not have to get in behind it.”
www.linepower.com 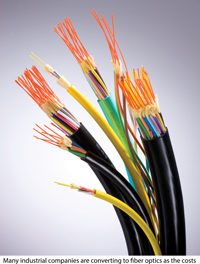