All of Teck’s Elk Valley sites share a single motivator. Until recently, this motivator was a long-serving unit that had finally become outdated. “The old motivator was sufficient for some of our older shovels, but it was severely underpowered for a lot of our new shovels,” said Mehul Joshi, P.Eng., electrical engineer, Teck Coal. “It ran at 1,400 kW, and whenever we tried to move it, the breaker would trip, sometimes as many as four or five times during a move.”

The old motivator created other problems as well. Dirt and grime from the engine covered the electronic control equipment, a problem that created additional maintenance and required frequent equipment replacements. Plus, the interior was cramped and had only one exit.

A key requirement for the new mining motivator was that it meet U.S. EPA Tier 2 emissions standards. Recognizing that mining is an energy intensive business, Teck has committed to short- and long-term goals that improve energy efficiency and reduce greenhouse gas emissions.

To meet its goals for an efficient and powerful mining motivator, Joshi and his engineering team worked with Cullen Diesel Power Ltd., Vancouver, the local MTU Onsite Energy distributor, to design a motivator specific to Teck’s needs. “Cullen Diesel has worked with Teck for about 40 years,” said Ethan Baily, a Cullen Diesel generator sales representative who worked on the new motivator design. MTU Onsite Energy gensets supply backup building power at various mine sites, while MTU engines power several of Teck’s mine trucks.

The power source in the new motivator is an MTU Onsite Energy generator set that includes an MTU 20V 4000 G83L engine, which meets EPA Tier 2 emission standards in accordance with Teck’s specifications.

The generator set’s power output is rated at 7,200 volts and 2,575 kW at an elevation of 1,300 m (Teck Coal mines are in the lower elevations of the Rocky Mountains). “We had to make sure the motivator would give the shovels ample power to run without stalling out at the high elevations,” said Baily.

The new motivator is about 130% more powerful than the old one—and more than capable of meeting the 1,434 kW peak power needs of Teck’s newest shovels.

The rope shovels’ AC and DC drive systems can induce large amounts of harmonic distortion, so Cullen Diesel and MTU Onsite Energy designed a custom alternator that could handle the drive motors’ high levels of harmonic distortion and still maintain required output. This slightly oversized device has a rated capacity of 3,000 kW at 105°C rise.

While in operation at mine sites, a Western Star 6900XD off-highway truck pulls the trailer. But the motivator also needs to travel on public roads to get to whichever Teck mine in the area requires its services.

Most mining equipment is suitable for mining roads only; however, the Teck Coal motivator is designed to be transported on public highways as well. “We can remove the mufflers and fold down the roof ladder, and we’re at the upper height limit for traveling on British Columbia highways,” said Baily. “We really worked to make sure that the height would be low enough so that the motivator would be able to easily travel to every site that it needed to.”

The large size of the motivator’s diesel fuel tank ensures that a single tank of fuel is sufficient for any shovel move Teck wants to make in the Elk Valley area. With a full tank, the genset can run for 7.1 hours at 100% load and for 20 hours or longer while powering the shovel, according to Baily.

Whether the motivator is in motion or sitting idle, its sturdy metal enclosure protects the contents from the elements. Inside, a variety of heaters also protects critical equipment during the harsh Elk Valley winters.

The enclosure, designed by Alum-Tek Industries, a British Columbia firm that designs and fabricates generator set enclosures, contains all of the motivator’s power-generation and control equipment. A separate control room inside the new unit houses all of the electronic components, which are protected by dust-tight enclosures. Keeping the electronics much cleaner than in the old motivator significantly reduces component maintenance and replacement. Because the electronics are in a room separate from the engine, crews working the controls have more space, better air quality and less noise.

The old unit’s design required “a lot of complicated manual processes for both operation and maintenance,” said Baily. User-friendly features on the new unit include simpler procedures for starting and operating the engine, and automatic equipment-monitoring systems that indicate problems and eliminate the need for personnel to check gauges and equipment operation. Indicator lights on the control panel, as well as on the outside of the enclosure, ensure that operators can spot problems even when no one is in the control room.

A reserve oil tank automatically levels engine oil, while oil and coolant lines extend to the outside of the unit, allowing faster fluid changes.

With occupant safety being a design priority, the new motivator has three exits instead of just one. Two of these are in the engine room and one, a trap-door exit, is in the control room. The new unit also has more sophisticated safety equipment than its predecessor. This includes up-to-date fire-suppression systems, spark-detection devices, and arc-flash relay protection.

Given the efficient engine-generator set from MTU Onsite Energy, the state-of-the art controls and the careful attention to safety in design, Teck is confident the new mobile power source will significantly reduce downtime and contribute to the company’s goals to improve energy efficiency. 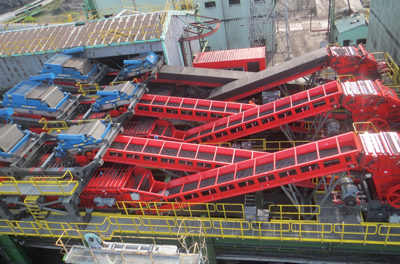 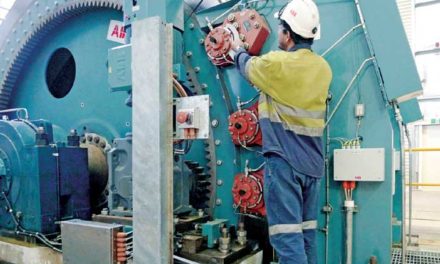