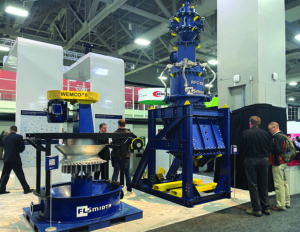 Flotation might be one of the longest-standing techniques in beneficiation, but it’s certainly not standing still. Today, new cell designs and digitally enabled control and monitoring technologies are not only driving efficiencies in traditional applications, but also opening new ones.

FLSmidth launched two new products, the WEMCO II and the REFLUX Flotation Cell (RFC), at the 2022 Society for Mining, Metallurgy and Exploration (SME) conference and exhibition earlier this year.

There are more than 40,000 WEMCO flotation cells installed at mining operations across the globe, and the WEMCO II builds upon this success, incorporating improvements to the WEMCO rotor and stator/hood to lower power consumption, while increasing air flow and slurry pumping. The results are better hydrodynamics and circulation, improved kinetics and performance, optimized energy efficiency and lower operating costs, and the ability to control air without an external air supply.

“WEMCO is the most popular flotation machine in the world,” he explained. “The rotor/disperser/hood design for conventional WEMCO machines had not been modified for a while, and we decided recently that it was a good time to improve it as we could see some real benefits.”

The goal of the WEMCO II project was to improve specific areas of the WEMCO and to make the new developments easy to retrofit into existing machines.

“We started with a brainstorming session with FLSmidth experts from many departments and came up with major project objectives and possible design changes,” Lelinski said. “In the next stage, we worked in two parallel paths: 3D printing of dozens of rotor/disperser concepts followed by tests in the laboratory environment (metallurgical performance) and making computational fluid dynamic (CFD) models of these concepts for hydrodynamic evaluation. Based on the results, the selected concepts were modified and tested more intensively.”

The best performing units were then tested at pilot scale — 1.5 m3 — in plant conditions using a distribution box and two units — conventional WEMCO and WEMCO II — for the best possible comparison. The top performing WEMCO II rotor/disperser/hood design was selected to be retrofitted into two WEMCO 1+1 cells in rougher duties, and two WEMCO SmartCell 250-m3 units in rougher and scavenger duties. These tests are now under way.

“Designing WEMCO II, we used our experience and lessons learned from the nextSTEP rotor/stator technology development to improve four selected areas: metallurgical performance, air control with the self-aspirated method of air induction, lower power consumption through more efficient slurry and air pumping, and reduction of the ‘WEMCO wave,’” Lelinski said. “We believe that a controlled wave is beneficial for froth recovery.”

WEMCO II is similar to the nextSTEP rotor/stator, which FLSmidth launched in 2015, as it has a new rotor design for more efficient pumping, and the disperser was replaced by a stator with blades. This results in smaller bubbles and better energy dissipation.

Lelinski added: “We also redesigned the WEMCO standpipe to stabilize the vortex and slurry surface. Of course, all these changes are unique and patent protected.”

WEMCO II components have been designed to be retrofitted to all existing WEMCO cells, which lowers the cost barrier for mines with an existing installed equipment base. As with the conventional WEMCO, WEMCO II is best suited to rougher applications where the recovery is the most important part of the performance; rotor placement at the top assures its advantage in this part of the flowsheet.

The RFC has now evolved from conceptual design to a full-scale industrial machine. Several laboratory and pilot test campaigns have been executed with results consistently showing improved recovery in a fraction of the footprint normally associated with open tank, traditional flotation.

FLSmidth described the RFC as “a ground-breaking technology that reduces plant footprint as well as water, air and energy requirements.” Aside from reducing capital expenditure by 35%, the RFC requires no direct power input, which can lower energy use in a flotation circuit by up to 60%. Improved kinetic efficiency reduces the amount of water used in the recovery process, and the nature of the technology also reduces the plant footprint, requiring less concrete for installation than traditional systems.

“The RFC is essentially a staged flotation device where feed is pre-contacted in a sparger system, ensuring elevated collision and attachment rates,” said Lance Christodoulou, global product line manager for REFLUX Technologies. “This contacted bubbly mixture is transported downward into the main chamber of the RFC where air fractions in the order of 45% are present. Consequently, this provides an order of magnitude greater bubble surface area for further collection of floatable material.”

The system is “frothless.” The bubbly mixture is transported to the overflow while being washed with fluidized water to produce high grade concentrates. The cell operates with a strong positive bias or downward volumetric flow, and the inclined channels allow for enhanced bubble-liquid segregation affording downward velocities in excess of bubble terminal rise rates. This enables the RFC to process feed fluxes much greater than the typical industrial limit of about 1 cm/second.

This article was adapted from an article that was originally published in the April 2022 edition of Engineering & Mining Journal.

The Growing Popularity of Sustainable Mine Reclamation