Some elements of the underground mine, particularly those that are a permanent fixture, tend to blend into the landscape over time. With little change to their design over the years and relatively low maintenance needs, ventilation infrastructure could arguably be considered one of those components.

That’s not to say ventilation ducting hasn’t evolved over time; original metal systems gave way to some use of flexible ducting in the 1970s, and since that time, flexible ducting has come to dominate the hard rock side of mining. Coal, with the need for greater volumes of air movement and heightened required safety requirements, clung primarily to the rigid systems to get air to the face.

Fiberglass has been an alternative option over the last couple of decades, though the cons of yet another form of rigid infrastructure haven’t gone away. While designed to have a smooth inner wall, allowing efficient air transport, the variable costs and the hazards of handling have created what many mines now consider just a necessary downside.

Some say one can’t get what they want without asking, and that is precisely what several Quebec mines did in 2013, when they began seeking out someone to manufacture a product that would be easier to install, less expensive to ship than heavy, voluminous fiberglass, repairable and more flexible. The ultimate result: Rigiflex plastic.

Rigiflex became the basis for the Hardline Performance Ducting line by Engineered Performance Ventilation System (EPVS), and the Canadian company went to work to develop a solution.

Checking All the Boxes

Absorbing feedback from the
industry, Rigiflex was created to be flexible yet rigid with less energy needed to get air to where it’s needed and greater space allowances underground, meaning less damage potential. A significant problem for conventional systems was also shipping, storage and placement of bulky ductwork. That, too, was
specifically addressed by the EPVS team.

“A copolymer was chosen versus PVC, as the cost was lower and standard formulations are lighter and somewhat flexible to resist damage in shipping and in placement and use in the mine,” said Michael Schulte, mining engineer and president of Engineered Performance Ventilation Products. “The new copolymer also is about half the cost of standard PVC formulations.”

The system comes in sheet form and can be constructed to spec at a warehouse or it can be built right where it will be needed underground. Once the Rigiflex is molded into 8-ft and 10-ft-wide sheets, those sheets are cut on a CNC machine and welded into round ducting.

While there is no real limitation to ducting size, Saskatoon-headquartered EVPS, which has teamed up with Pennsylvania-based Longwall Mining Services to expand the semirigid product into the coal space from the Appalachian region outward, said the most standard sizes for coal are emerging to be 16 in., 18 in., 20 in. and 24 in. due in part to air movement, but also to an average working space that is generally tighter than hard rock, where common sizes are 36 in., 42 in. and 48 in.

“Hardline is seen as a replacement for rigid or semirigid ducting in all underground applications,” LMS Owner John Whitfield said. “We are looking to make Hardline the ‘new normal’ for mines as the resistance to airflow is less than for steel and fiberglass, leading to lower energy use. Even though we are closely related to energy generation in the coal industry, we need to be conscious of the high energy use of mines in a time when some areas have a deficit in energy and we face the prospect of greater taxation on energy.”

The companies noted that the projection of lower energy use from this flexible system is not just an empty claim. With an extremely low K factor, it is much less resistant to air than the old standby metal and fiberglass products.

In the time since the initial phase was effective on August 1, 2014, MSHA said it and operators have collected a combined 122,000 respirable dust samples, 99% of which have met compliance levels.

Additionally, last month, the agency said that 99% of the samples it collected between April 1 and June 30 of this year also were in compliance with the standards. It cited the use of continuous personal dust monitors (CPDMs) for the ability to analyze more than 20,000 underground operator samples in real time.

“Black lung has claimed tens of thousands of lives,” said Joseph Main, MSHA assistant secretary of labor for mine safety and health. “The positive sampling results are due to the extraordinary efforts of MSHA and industry working to clean up the air that miners breathe and successfully implement the respirable dust rule.”

According to data from the National Institute for Occupational Safety and Health (NIOSH), black lung has caused or contributed to more than 76,000 coal miner deaths since 1968.

With success in the hard rock mines of North America, including Alaska, EVPS felt there was no time like the present to share the design with the coal mining community. This is where the connection with Whitfield’s Longwall Mining Services started, and the other two said the timing for the partnership was ideal. Together they are taking a thoughtful, detailed approach to the endeavor to enter coal, working with multiple operations in Pennsylvania on testing to gather additional feedback from mines of various sizes.

“The coal mines in Pennsylvania where the product is being introduced seem eager to try it knowing it will help improve their ventilation system,” Whitfield said. “The attitude is amazing.” EVPS and LMS noted that the product already underwent testing with the Mine Safety and Health Administration (MSHA) before being sent into the front-line trials.

Ideal placement in coal operations will be at key areas, the pair said, to bring air from a main air entry point and moving it efficiently, with very little pressure loss, to the face of developing longwall sections where it is crucial to combat and move methane excursions for proper exhaustion. It will also certainly play a role in new ventilation and dust control rules that are themselves a “new normal” for coal mining.

“The main new ventilation rules will be in regard to dust and improving working conditions for the miner. We know that improved air flows will help us ensure the end users have the proper tool to stay in compliance, and more importantly, have a safer work environment,” Whitfield said. 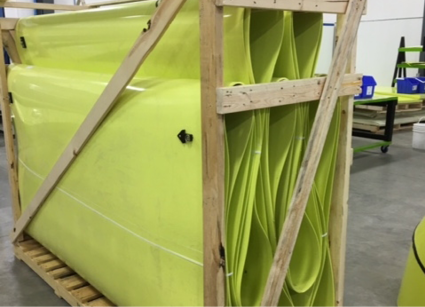 HardLine is easier to ship and store, and makes creating a specialized ducting system easier for operations.

Once testing is completed and the companies are happy with the results and mine feedback has been evaluated and acted upon, rollout of Hardline ducting to the coal industry has boundless potential, according to Whitfield.

“The worldwide introduction of this product is Pennsylvania for coal, so that is exciting both for us and for the mines. We think that the knowledge and the safety attitude of U.S. coal mines is perfect for bettering the product.” The two project that the manufacturing currently done in Canada will also be expanded to the U.S. as it begins that growth.

For both EVPS and 30-plus-year coal industry supplier LMS, operator support has been and will continue to be key to its future.

“All of the advances that occur start in a lab, and then you have to take them to the mine,” Whitfield said. “In all of Engineered Performance’s products, there is not one that has not evolved due to feedback, and the objective of continuous improvement. These products are for miners, and their input is critical.”