Recent epidemiological studies have indicated that prevalence of coal workers’ pneumoconiosis (CWP) has increased in eastern Appalachian coals but not in other coal mine regions. Numerous toxicological studies have shown that bioavailable iron and quartz in the Appalachian coals are likely causative compounds that lead to CWP development. In the Western coals, calcite (CaCO3) prevents iron from becoming bioavailable and limits endogenous iron to interact with quartz, resulting in reduced toxicity of the coal dust. Here we propose a novel strategy to use calcite as a protective agent to prevent CWP in the Appalachian coalfield. This strategy may be more feasible than simply reducing dust concentrations, since the conventional dust control technology appears to have approached their maximum capacity, making an even more stringent dust standard impractical.

Coal provides a dependable, inexpensive and long-lasting energy source worldwide. However, the subsequent health and environmental costs, such as coal workers’ pneumoconiosis (CWP) or black lung disease, can increase the total cost by 60%-100%. Hence, reducing CWP occurrence could financially benefit the society and the coal industry, not to mention mitigating the immeasurable costs exacted from coal miners and their families. The CWP disease, commonly associated with underground coal production, is one of the most common occupational diseases in the 20th century. The passage of the Mine Health and Safety Act in 1969 resulted in significant reduction of occupational exposures to coal dust and decreased CWP disease incidence. However, in developing countries, owing to the economy development, numerous miners are exposed to the coal mine dust. It is reported that there are more than 6 million underground coal miners in China and the number of new CWP patients is above 4,000 cases per year. Even in the United States, despite a slight decrease in CWP prevalence in the Western coal mine regions, the prevalence of CWP has increased markedly in Appalachia, such as Kentucky, Virginia and West Virginia coal mine regions since year 2000.

Improved ventilation, the use of water sprays to wet and to capture airborne dust, and the improved cutting tool designed to generate less dust are the current strategies for the reduction of coal dust in underground coal mines. While efforts to limit underground coal workers exposure to coal mine dust must continue, these strategies appear to have approached their maximum capacity, making an even more stringent dust standard impractical (e.g., from 2 mg/m3 to 1 mg/m3 as has been proposed). This Appalachian region-specific increase in CWP calls for new research to develop a novel strategy that is beyond the conventional dust control technologies currently employed in the coal industry. Based on knowledge acquired through physico-chemical, toxicological and epidemiological studies on coals, here we propose a feasible approach to use calcite to reduce coal dust toxicity rather than reduce coal dust concentration.

A fossil fuel, coal is an aggregate of heterogeneous substances composed of organic and inorganic materials (Meyers 1982). Among all known risk components in the mixed coal dust, coal rank or carbon-centered free radicals do not seem to play a significant role in CWP development. It appears to be bioavailable iron (BAI) and quartz that play major roles in coal dust-induced pathogenesis. It has been shown that, despite higher levels of respirable coal dust in Australian underground coal mines, lower respirable quartz content in the dust may contribute to the lower incidence of CWP in Australian coal workers as compared to their U.S. counterparts. A positive association was shown between CWP and quartz content with a correlation coefficient r=0.68, p<0.05. Studies on coals from the U.S. and EU have demonstrated a more robust association between BAI and CWP prevalence. For example, CWP prevalence in seven U.S. coal mine regions correlates with BAI levels in the coals with a correlation coefficient r=0.94, p<0.0015. Biological studies also indicate strong mechanistic links between BAI content in coal and reactive oxygen species as well as inflammatory responses associated with CWP.

Iron and quartz are proven inducers of fibrosis. Both are present in the U.S. Eastern and Western coal mines alike. This begs the question: why would these two compounds cause a health problem to the coal miners in the Eastern but not to those in the Western coal mines in the U.S.? Perhaps instead of further investigating mechanisms by which BAI and quartz cause CWP, a more pragmatic approach should be to find out what compound(s) in the mixed coal dust inhibits the toxicities of BAI and quartz, and thus prevents CWP from rising in the Western coal workers.

We have found that BAI is stable only under acidic pH and, Western coals containing high levels of calcite (CaCO3) have high pH and, consequently low BAI and less toxicity. In addition to eliminating BAI in the mixed coal dust, calcite also reduced endogenous levels of cellular iron, diminishing an important source of iron that can be sequestered by silica and plays a critical role in silicosis and CWP. According to the calcium oxide (CaO) levels in high temperature ashes, calcite levels in Western coal mine regions have been estimated to be between 2%-5% (w/w). Conceivably, this calcite-mediated lower toxicity may partly account for the relatively low CWP prevalence observed among Western coal workers.

Does the addition of calcite to Appalachian coals cause environmental concern to the coal industries? Calcite is the main constituent of rock dust that is widely used in underground coal mines for prevention of dust explosions and in the treatment of acid mine drainage. Pulverized calcite is added to the boilers of coal-fired power plants to absorb SO2 and NOx, important components of the air pollution that leads to acid rain. Given these existing uses, introduction of calcite into coal before or during mining should not cause substantial environmental concern, and may even have beneficial effects on acid rain and acid mine drainage.

Now the questions remaining to be answered are whether it is safe and feasible to use calcite as a preventive agent in Appalachian coal mines. It is harmless to ingest calcite since calcium is an essential human nutrient required in substantial amounts. The dietary calcium recommendation was recently increased from 800 to 1,200 mg/day for persons older than 51 years of age. In nutrition, calcite is the most common calcium supplement because it has the highest concentration of calcium by weight (40%), as compared to other common calcium supplements (e.g., calcium citrate, acetate, phosphate and gluconate). Calcite is also commonly taken orally as an over-the-counter treatment for heartburn and acid indigestion. Orally administered calcium decreases iron absorption, and thus BAI in the body.

However, despite its presence at relatively high levels in Western coals, there is a lack of toxicological data on the inhalation of pure calcite. In laboratory experiments, mouse lung tissue indicated increased fibrogenic markers of epithelial mesenchymal transition after exposure to acidic and BAI-containing PA coal dust, but not after exposure to PA coal dust plus calcite or calcite alone. Markers of inflammation increased following exposure to PA coal dust or calcite alone, but not following exposure to PA coal dust mixed with calcite. In theory, calcite neutralizes acid, producing nontoxic calcium ions and carbon dioxide. These results suggest that, even inhalation of pure calcite is toxic. When mixed with BAI-containing coal, calcite and BAI neutralize each other’s level and diminish the toxic effects of the mixed dusts. Further laboratory investigations should confirm this observation.

To turn the scientific research finding into a CWP mitigation technology, proper amount of calcite should be introduced to the BAI-containing coal or coal dust in efficient and practical means. In a mining setting, three potential technologies to introduce calcite into coal mines could be explored.

First, a potential calcite-based technology might be especially applicable in Appalachian coalfields, which have much higher methane content than other U.S. coalfields. To prevent methane explosions and to reduce the ventilation requirement, large underground coal mines employ various degasification technologies to remove the major portion of methane content in the coal bed before it is extracted. The modern degasification technology includes drilling long horizontal degas holes in the coal bed and then hydraulically fracturing the coal bed for improved methane recovery. Both of these might provide an ideal avenue for calcite introduction, particularly because the calcite-BAI contact time would be relatively long, allowing for extended neutralization (Figure 1).

The hydraulic fracturing process used to degasify coal beds might be an ideal time to introduce calcite to the coal seam. A predetermined amount of calcite (e.g., 20-30 mesh size) could be added along with sand to the fracturing water to serve as a proppant to keep the coal seam fractures open. Degas holes normally have a service time ranging from a few months to two years or even longer before the degassed coal is extracted. Assuming diffusion of the calcite suspension throughout the coal seam, this would allow sufficient time for the injected calcite to neutralize the BAI in the coal. If such an approach proves feasible, the toxicity of dust produced in cutting the calcite-treated coal might be greatly reduced. Yet, much preliminary research should be done in a laboratory environment before attempting any large-scale calcite injection in coal seams.

Also, the implementation of advanced drilling techniques, including surface to horizontal multilateral degasification wells, and in-mine horizontal wells could allow for even more targeted introduction of calcite to mining areas. These methods are well documented and allow for high seam contact. These wells are generally flooded or filled with a specialized gel prior to mining to avoid mining into pressurized wells. They could instead be filled with a calcite mixture.

Third, when degasing is not feasible in small coal mines, it may be possible to introduce respirable calcite during mining through a secondary water spray system. The primary water spray currently in use is to wet the airborne dust particles and make the contacted particles larger and heavier, causing them to quickly settle out of the ventilation air so that they are no longer respirable. A secondary water spray system with respirable calcite may be used to target the escaped respirable coal particles. Future research should assess whether adding calcite to these water sprays can be done safely and effectively, with the intent of not only reducing dust levels but also neutralizing adverse health effects of BAI and quartz contained in the respirable coal dust.

In conclusion, calcite holds promise for reducing CWP prevalence among Appalachian coal miners, regardless of the pneumoconiotic effects caused by either BAI or quartz or both. Thus, while efforts to identify causative compounds and to reduce respirable dust levels in underground coal mines must continue to be pursued, further research is warranted to explore the potential use of calcite as a novel strategy for preventing CWP.

Acknowledgments
The concept has been developed through grant support by the National Institute for Occupational Safety and Health; grant number: 1R01 OH009771. 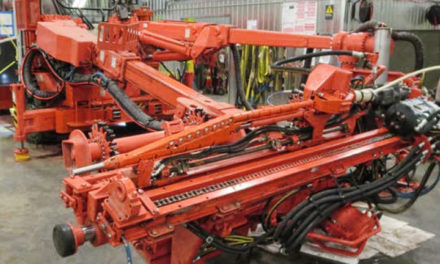 The Tail is Wagging the Dog