However, they have had some issues with plugging of the spiral, especially with wash down. While some have tried wing pulleys, these are usually avoided due to concerns of stirring up the dust, or the intermittent contact with the belt causing too much vibration, or the fact that a wing pulley will throw the material back onto the belt. In this case the material will collect with other material falling onto the belt and can eventually plug up the wings. A new device has been developed, the Herringbone Wing pulley, which is a hybrid of the spiral drum and wing pulley.

Spiral drums were first developed for use on tail pulleys in coal mines some 40 years ago. The problem was that the wing pulley would move too much air, stirring up too much dust, especially as belt speeds increased. As the spiral bar is only an inch tall it doesn’t leave much room for material to be channeled out the side of the pulley. The other problem is that it takes several rotations of the pulley to auger the material out from between the belt and the pulley. In some situations, where the tailpiece is frequently overrun, the spiral pulley can plug, (as shown in Figures 1 and 2) rendering the cleaning action ineffective.

Wing pulleys can act like a large fan, stirring up the dust. E-wings (wing pulleys with end discs) reduce the amount of air being moved and reduce the dust being stirred. However, the nature of the wing pulley would still cause problems. The first is that the intermittent contact would help clean the belt as it generated a slapping action that shook the material loose from the belt. However this slapping action generated a lot of noise and a lot of belt vibration, which reduced the effectiveness of the skirtboard seals.

This happens whenever the centrifugal force exceeds the weight, (force due to gravity). Setting these two forces equal to each other and solving for belt speed yields Equation 1.

Applying this equation to common pulley diameters used in mining has been tabulated in Table 1. The results show that most conveyors would only have to travel 240 to 340 feet per minute (fpm) to throw the material back onto the belt and not allow the material to fall onto the gusset. Note: Gussets do not have wear problems.

Analysis
Since material doesn’t fall and hit the gussets, what good are gussets? They fill in the gap between wings bracing one wing against another. The shape and position of the gusset is based upon the material falling and hitting the gusset, not the bracing of the wings. A better design would have the brace perpendicular to the wing, and at the center, not the ends where it could block material from exiting the pulley. For example; a steel disc at the center could tie the wings to each other.

If the gusset angle does not make a difference on the cleaning ability of the wing pulley, what does? Comparing the existing “self-cleaning” pulleys provides insight to the problem. The wing pulley has straight wings and will throw material back onto the belt when used as a tail or take-up pulley. The spiral drum has a bar wrapped around a drum at a very slight angle, a helix, that augers the material out away from the center of the pulley. It does the job, but takes many turns to get the material out. The bar is only 1 inch high, so it cannot handle much of a lump size. It can easily become overloaded with material and can plug.

Solution
The answer is a cross between the wing and the spiral drum. Take the wings and angle them to the axis of rotation. Then when the wing throws the material, it will be perpendicular to the wing and NOT the axis of rotation. The more the wing is angled, the better, up to a point. After 45° of wing angle, the material can start to hang up on the wing, sliding along the surface of the wing, instead of being thrown. But, how can this be done and maintain the strength of the wing pulley?

Conventional wings span the distance between the hubs with one continuous member, the wing. But in an angled wing pulley, the wings on each side will be angled backward, such that the material is thrown to the side. There will be no single wing to span the distance between the hubs; even if it did there would be a bend in the middle, reducing its strength against the belt load. Therefore, a member has to be added at the base to support the wings. A tube is needed to provide the foundation for such a pulley. It needs to be heavy, much like a rim to support the load. The wings are welded to the tube.

Having the wings at an angle also provides constant contact with the belt, reducing vibration and noise. The reduction in vibration is important at tail pulleys, as too much vibration will reduce the effectiveness of skirtboard seals.

While an angled wing provides a training effect, it only does so as the belt enters and leaves the pulley. This is very effective for small wraps, such as snub pulleys. It is only a minor effect on large wrap pulleys, such as tail pulleys. To achieve a better training action on tail pulleys, crown is important, but a full crown would put a lot of stress on the belt in an angled wing pulley. An end or radius crown provides good training action without over stressing the belt. The Herringbone Wing pulley crown is a combination of the end crown and the radius crown. The crown is only on the ends, similar to an end crown, and the crown is curved to ease the transition between the flat center and the crowned edge. The different crowns are illustrated in Figure 6. This makes the Herringbone Wing crown effective on all locations.

Putting the wings at an angle reduce the forces that cause wing fold-over. The force is caused by rocks getting caught between the end of the wing and the framework of the conveyor. This force is directed against the direction of rotation. With the wing at an angle, the fold-over force is at an angle to the wing, reducing the effect of this force. The Herringbone Wing height is between 3 and 6 inches, maximizing the lumps size and cleaning action, while minimizing air flow and fold-over bending moment.

Herringbone Wing pulleys were developed in 2010 and have been used in applications involving coal, potash, limestone, petroleum coke, grain, etc. (as shown in Figures 7 and 8) and have performed well in all. They have reduced maintenance, vibration, noise, and improved tracking over the pulleys they have replaced. Analysis has shown that they are stronger than the wings they replace, and have been used when conventional wings will not handle the load.

Laughlin is the product engineering manager for Precision Pulley & Idler. This article is based on a presentation he made at the Coal Handling & Storage seminar, which took place in St. Louis during October. 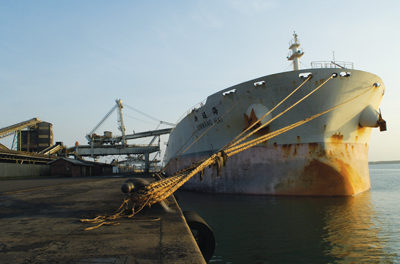 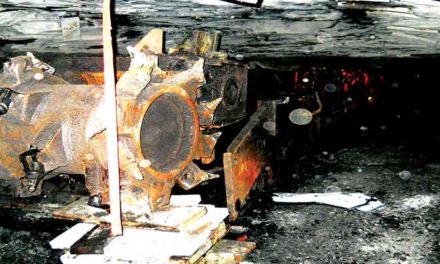