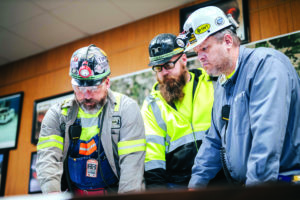 In the mid-1990s, the once-thriving Illinois coal industry had been reduced to a shadow of its glory days. Demand for coal was flagging, and the large companies all but pulled up stakes in the region.

Four partners, Steve Carter, F.D. Robertson, James Bunn and James Bunn Jr., understood there were still markets for southern Illinois’ high-quality, low-chlorine coal. In 1998, family-owned Knight Hawk Coal LLC was created, initially focusing exclusively on surface mining. In 2006, Knight Hawk opened its first underground mine and began a partnership with Arch Coal, which now holds a 49% interest in the company. Today, Knight Hawk runs a mix of operations, including five surface mines, one underground mine and two carbon recovery plants. The operations have grown from a crew of 17 to about 400 and nearly as many contractors. Knight Hawk produces more than 5 million tons of coal annually. 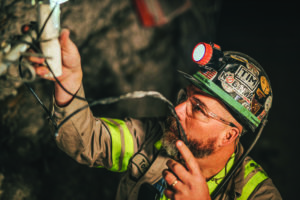 Despite growth and success, the company remains family-owned, rooted in the community, and focused on safety and productivity. In 2019, Knight Hawk purchased a communications and tracking system from Innovative Wireless Technologies (IWT). “Knight Hawk’s procurement process was very thorough,” said Brad Hartwick, IWT’s Midwest mining sales director. “They asked the right questions, made a very comprehensive comparison of competitors, followed up with our references, and visited our headquarters. They wanted to be sure that our system fit with their operations.”

“We really focused on the benefits and the total cost of ownership. We evaluated systems, aside of the cost, making a determination on functionality,” Knight Hawk Mine Superintendent Tom Hasenstab said. “What does each system provide us? Are there advantages to the system in safety, production, and maintenance? Some systems we looked at were two-way; some were canned text only, or radio communications. You have to look at the backbone. How do companies invest in and maintain their technology? How much training is required?”

“Everything Knight Hawk believes in revolves around the concept, ‘keep it simple,’” Underground Maintenance Superintendent Brian Wallace said. “The technology has to have a goal. It has to have safety, productivity and longevity to prove out. It’s like buying a tool. You don’t want to buy a tool you just use once and then it gathers dust. You want something that provides value day in and day out. It has to make sense and be the right fit for Knight Hawk.” 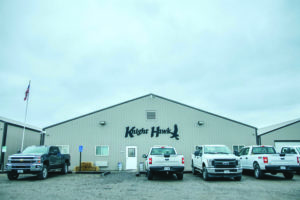 Family-owned Knight Hawk has experienced growth and success, and it remains committed to the community and focused on safety and productivity.

“We spent a lot of time looking at communications and tracking systems to be sure we chose the right one for our culture and operations. We wanted to understand the functionality and options because every solution is different. We talked to people to be sure the technology could be used in multiple ways too as it was integrated into our system. After really researching the field, we chose IWT Sentinel because the technology was the best fit for our operations.”

Wallace explained the challenge was to provide voice communication to each of the five units. Knight Hawk has miles of infrastructure underground, and efficient operations require keeping information flowing to every aspect of the operation from the surface to the underground, as well as the four-mile-long overland conveyor.

“Our system is battery RF-based,” Wallace said. “There’s no wiring involved. There’s an external antenna. You can move equipment very quickly and efficiently.”

IWT designed a system that allowed full, real-time, two-way communication between surface and underground operations. Installation finished ahead of schedule.

“It’s amazing how fast and easy Sentinel is to integrate,” Wallace said. “It took a lot of work on our part and IWT’s part. We have a system that works very well. I am very proud to talk to people about how we can talk throughout operations, from our roof bolters to our prep plant.”

“When we started looking at the IWT system, there was some concern that the ease of conversation might be used in an unproductive manner,” Hasenstab said. “Our miners, however, have utilized the system in a very professional manner, leading to improved safety as well as productivity. The majority of the conversation is relevant to the job. We are very impressed with the way it immediately became a part of the way we work.” 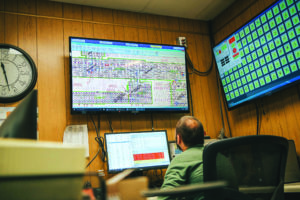 Coordination between paramedics underground and the central control room operator (above) on the surface allow them to transport an injured miner from the face to a helicopter in less than 30 minutes.

The Sentinel system has improved Knight Hawk’s efficiency and profitability in a number of ways, according to Wallace. In the event of equipment failure or breakdown, maintenance arrives with the right equipment, reducing downtime. Incremental improvements in communication between operators have added up to significant improvements in production. Asset tracking allows for precise and immediate location of equipment. Sentinel provides tools to allow supervisors the ability to more quickly reply to an inspector’s question. The improved communication adds up to significant time savings and real tonnage.

While production has to be a focus of every operator, safety is a cornerstone of Knight Hawk’s success.

“Our attitude toward safety is about creating a culture,” Hasenstab said. “Everyone is passionate about safety at Knight Hawk, including Knight Hawk President Steve Carter. He recognized the Sentinal system as a tool that would enhance the safety of the miners and assist in the creation of a culture of safety. Nothing is more important to him than our miners’ safety.”

“Mr. Carter says safety is 100% about putting a barrier between you and a hazard,” Wallace said. “Whether it’s a physical barrier or a technology.” 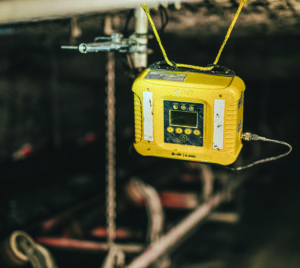 The Sentinel system is MSHA (ATEX) approved and requires little or no maintenance.

A recent mine injury underscored the value of the Sentinel system. The Knight Hawk team’s fast action saved a miner’s life and the ability to communicate in real time gave the team an important tool in a critical situation.

“In an emergency situation like that, every second counts,” Hasenstab said. “Sentinel gave us a system that allowed everyone to communicate efficiently. When we were evaluating communication and tracking systems, it was clear to us that voice was superior to text. It has absolutely proven itself.”

Wallace said the IWT system was critical in assisting not just where the incident occurred, but in other areas as the facility responded to the emergency. For example, it could be communicated and confirmed that roads were clear. Information could be shared with the paramedics while they were in route. The paramedics could communicate with the surface and be sure that emergency transport vehicles were positioned properly. In this situation, the paramedics had to call in a helicopter and the Sentinel system helped them make sure the transport was as efficient as possible. From the time of the incident until the miner was on the helicopter, only 25 to 30 minutes elapsed. Wallace said he didn’t think that kind of response would have been possible with the old system.

“We work in one of the most hazardous environments of any industry,” Wallace said. “We acknowledge that. But it doesn’t give us an excuse not to have the best tools available to protect our people. It’s important our industry understands how big an advantage voice presents in emergency situations.”

Hasenstab and Wallace emphasize that the workforce and structure of Knight Hawk is unique because the company promotes personal accountability and the freedom and trust for people to make decisions that will benefit the company. The goal is to give as much responsibility to someone shoveling the belt as an executive.

“We have a saying that underground, a section face boss should have the easiest job in the mine because everyone should be trained and do their job properly,” Wallace said.

IWT continues to work with Knight Hawk to fine-tune the network and enhance features. “IWT has been quick to address situations,” Wallace said. “They spend time after a call looking back at the history on the server, suggesting improvements to our process. It helps me look back to see if something is equipment- or weather-related. IWT is very forward-thinking in maintenance and operation.”

“With Knight Hawk, we are versatile and employees are always ready to step into multiple roles,” Hasenstab said. “From the top down, people just simply do anything that needs to be done to make Knight Hawk a success. The coal companies that are likely to succeed in this market are those companies that are the safest and most productive.”

This article was written for and submitted by Innovative Wireless Technology.

The Sentinel system delivers the features and benefits that matter most to mine safety and operations:

• Handsets and tags enable continuous tracking of people and assets;

• No cabling in the working sections;

• Seamless integration with other IWT products and services.

The rugged push-to-talk radios provide voice, text and tracking — all in one device. Tracking can also be achieved with small, battery-powered Tracking Beacons or with Tracking Tags. Each device has emergency alert capabilities and reports back to dispatch to provide real-time, continuous tracking. 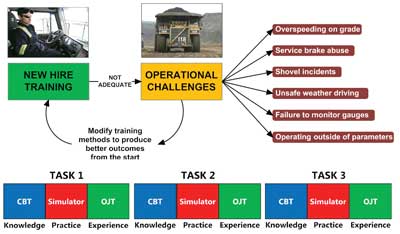 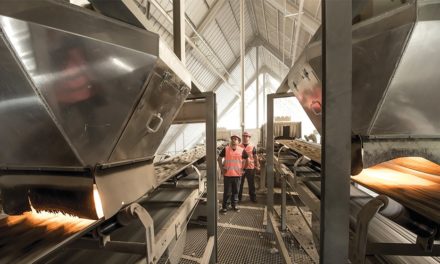