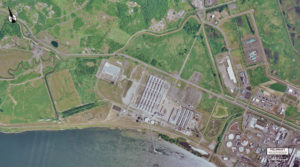 The proposed site of the Millenium Bulk Terminal is the former Alcoa/Reynolds aluminum plant adjacent to the Columbia River in Longview, downstream from the current Weyerhaeuser lumber mill. (Photo: Millennium Bulk Terminals)

Montana and Wyoming have asked the U.S. Supreme Court to accept their challenge of what they considered Washington’s “unconstitutional and discriminatory” denial of a permit for a proposed export terminal in Longview, according to Attorney General of Montana Tim Fox.

Montana and Wyoming are asking for original jurisdiction, which means the dispute would bypass lower courts and go directly to the U.S. Supreme Court.

The states argued that Washington’s discriminatory denial of a Clean Water Act Section 401 Water Quality Certification for the proposed Millennium Bulk Terminal violates both the Dormant Commerce Clause and the Foreign Commerce Clause of the U.S. Constitution. The Commerce Clause, they said, grants the federal government — not states — authority to regulate interstate commerce.

“Montana’s access to growing overseas markets shouldn’t be dictated by the latest political fads on the west coast,” Fox said. “As we are telling the court, the framers of the United States Constitution wrote the Commerce Clause to prevent the very harms that Washington state is inflicting upon Montana and Wyoming today.”

“I did not come to this decision lightly, but Wyoming’s ability to export one of our greatest natural resources is being blocked unlawfully,” Governor Mark Gordon said. “It is critical that Section 401 of the Clean Water Act not be used to interfere with lawful interstate commerce. It is not a tool to erect a trade barrier based on political whims.”

If built, the Millennium Bulk Terminal would ship 44 million metric tons of coal annually from Montana and Wyoming to destinations overseas.

In 2017, the Washington State Department of Ecology denied the project a Section 401 Water Quality Certification, a necessary permit under the Clean Water Act. The denial effectively killed the proposed terminal.

“As our filings with the court show, the record is clear that Washington state officials killed the project for reasons outside the scope of the Section 401 permit and have demonstrated a clear bias against Montana and Wyoming coal,” Fox added.

Washington state has 60 days to file a response to Montana and Wyoming’s petition.

Abandoned Mine Reclamation Extension Legislation is Introduced in US House