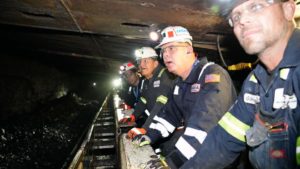 Sen. Joe Manchin (D-WV) and recently appointed U.S. Labor Secretary Marty Walsh toured the American Consolidated Resources’ Ohio County longwall mine in West Virginia’s northern panhandle. This was the first underground coal mine tour for Walsh, who was previously the mayor of Boston.

NIOSH to Host Workshops for Coal Operators at Longwall USA