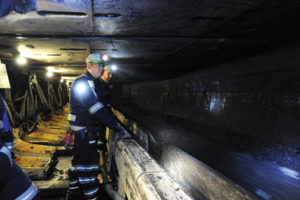 Arch Resources recently commenced production at its new Leer South longwall mine in Barbour County, West Virginia. When fully ramped, the mine is projected to produce up to 4 million tons per year (tpy) of premium-quality, High-vol A metallurgical coal for sale into global steel markets.

“This is a momentous development for Arch Resources, our global steel customers and the state of West Virginia,” President and CEO Paul A. Lang said. “We expect Leer South to quickly become one of the most competitive metallurgical mines in the United States, and to serve as an essential feedstock for global steel production for the next two decades or more.

“At the same time, we expect this world-class operation to act as a cornerstone of the northern West Virginia economy over that same timeframe, providing more than 500 permanent, well-paying jobs while supporting countless other regional businesses.”

The state of West Virginia played a pivotal role in the development of the project, according to Lang. “We want to thank Gov. Jim Justice and the state of West Virginia for their great vision in facilitating this significant, job-creating project,” Lang added. “We could not ask for a better partner as we continue to intensify our corporate strategic focus on metallurgical coal and global steel markets.”

Arch commenced work on the new mine just 2.5 years ago and invested approximately $400 million on the buildout.

“The Leer South team has done an extraordinary job in bringing this large, multi-faceted project to fruition in the face of a pandemic and in the midst of a rising material and labor cost environment,” COO John T. Drexler said. “Because of the tremendous focus and dedication of the entire Arch operations team, Leer South is ramping at a highly strategic time, with the global economy rebounding and with steelmakers struggling to secure sufficient supplies of high-quality metallurgical coals.”

As anticipated, the Leer South longwall started up at the end of August following a planned 30-day outage that accommodated the upgrading of the material handling system and is currently in the process of system testing and integration, with the expectation that ramping will continue throughout the month of September. Arch expects Leer South to make a significant contribution to production volumes in the fourth quarter of 2021, and to ramp to full production mode by the start of 2022.