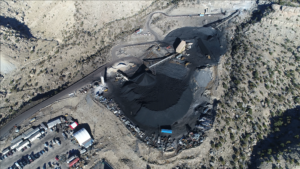 Murray will agree not to mine and leave certain coal permanently in place in Longwall Panel No. 19 East at the Marshall County mine. (Photo: Murray Energy)

A group of natural gas pipeline operators have agreed to pay Murray Energy Corp. approximately $34 million if it will agree to not mine a certain area at the Marshall County coal mine in West Virginia.

The agreement was put in place to avoid any impact to the pipelines and provide stable support for them. Murray will agree not to mine and leave certain coal permanently in place in Longwall Panel No. 19 East.

Murray Energy, which filed for Chapter 11 back in October, has asked the Bankruptcy Court for the Southern District of Ohio for authorization to enter into the agreement with the pipeline operators.

According to court documents filed in Murray Energy’s bankruptcy case, “entry into the coal sterilization agreement is a sound exercise of their business judgment.”

Murray Energy said operations at the longwall would have resulted in 600,000 tons of mined coal and millions of dollars in potential revenue, however, “the coal sterilization agreement allows the mining companies to monetize their coal reserves without incurring costs associated with longwall mining operations.” They would essentially be “selling” their coal to the pipeline operators.

Murray Energy said it is a “sufficient” amount to compensate them for their eventual coal sales revenues.

“Entry into the Coal Sterilization Agreement is a reasonably foreseeable use of debtors’ assets that will maximize the value of the debtors’ estates,” the court documents stated.

A hearing on the matter will be held on July 2.