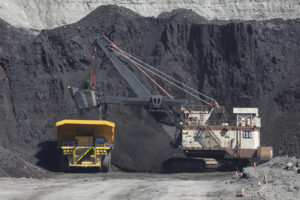 The transaction would include Peabody’s North Antelope Rochelle Mine (above). (Photo: Peabody)

On February 26, Peabody and Arch Coal announced that they intend to continue to pursue the creation of a joint venture that will “strengthen coal’s competitiveness with other energy sources and create substantial value for multiple stakeholders.” The announcement follows a negative split decision by the U.S. Federal Trade Commission (FTC) that advances the process to the legal system.

“We have provided tremendous amounts of evidence to the FTC during an extensive review, fully demonstrating that coal, including Southern Powder River Basin coal, faces intense competition from natural gas and other alternate fuels,” Peabody President and Chief Executive Officer Glenn Kellow said. “We believe that the commission has reached an incorrect decision that should be rapidly remedied within the court system to allow customers and others to benefit from the combination.”

The companies said they intend to appeal the FTC’s decision within the U.S. federal court system over the coming months. They believe the FTC has incorrectly defined the market, and fails to reflect the true competitive nature of the current U.S. energy landscape.

“The proposed joint venture promises to enhance the cost-competitiveness of our thermal operations, enable us to serve the evolving needs of domestic power generators well into the future, and protect the value of our thermal assets for our shareholders,” Arch CEO John W. Eaves said. “In short, it will create a stable, durable supply platform for our thermal customers even as we continue our organizational pivot toward global metallurgical markets.”

The transaction was announced in June 2019 and would combine the companies’ Powder River Basin and Colorado assets. Ownership of the joint venture would be structured with Peabody owning 66.5% and Arch owning 33.5%. The joint venture is expected to realize annual synergies of $120 million over an initial 10-year period.

The transaction Peabody’s North Antelope Rochelle Mine (NARM) and Arch’s Black Thunder Mine, which share a property line of more than seven miles. Additional assets include the Caballo, Rawhide and Coal Creek mines in Wyoming along with the West Elk and Twentymile mines in Colorado.

Peabody Will Acquire Shoal Creek Mine