Norway Extends the Life of Svalbard Mine to 2025 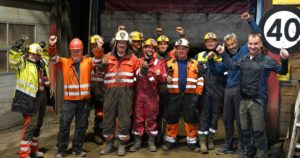 The world’s most northern coal mine, Spitsbergen Kulkompani’s Gruve 7 (Spitsbergen Coal Co.’s No. 7 mine), which operates on Svalbard, was scheduled to close in the autumn of 2023 when the local coal-fired power plant is also scheduled to close. The Store Norske board, however, has now decided to extend the operation of Gruve 7 for two years to export coal to Europe.

“The coal will be used as a reduction agent for steelmaking in Europe,” Norwegian Minister of Industry Jan Christian Vestre said. “There is war and great uncertainty about access to critical raw materials. This also applies to steel production in Europe. Norway must take our share of the responsibility for the security of the supply of raw materials. The state, as owner, will therefore not object to a conditional extended operation until July 2025.”

The decision to continue the production of coal for industrial purposes for another two years will not have an impact on the energy transition in Svalbard, the Norwegian government said. An archipelago between mainland Norway and the North Pole, Svalbard is one of the world’s northernmost inhabited areas. It’s known for its rugged, remote terrain of glaciers and frozen tundra sheltering polar bears, Svalbard reindeer and Arctic foxes. A few years ago a television series (Kompani Spitsbergen) documented the hearty lives of the Svalbard miners on TV2.

Germany’s Clariant is Gruve 7’s main customer and the company has purchased coal from the mine for 40 years. “Based on the current market situation for coal, [Clariant] wants secure access to coal in the quality they need for their purpose,” Store Norske CEO Jan Morten Ertsaas said. “This is a good solution for all parties. We can extract the available coal reserves at Gruve 7 and are assured of good profitability with low market risk through this agreement with a customer with whom we have had a long-term professional collaboration. For our part, it gives us somewhat longer time for a demanding and necessary restructuring of the company. Not least, it is gratifying for the miners at Gruve 7 who get more predictability and can stay at work longer.”

A room-and-pillar operation, Gruve 7 supplies 80,000 metric tons of coal per year to European customers for industrial applications. The Spitsbergen Kulkompani was founded in 1916 and Norway took control of it in the 1930s. Activity at the mine has supported the local community of Longyearbyen for more than 100 years.

Hallador Ramps Up in Indiana

Sumitomo Sells Share in Rolleston Coal Mine to Glencore