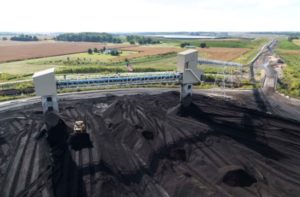 Hallador Energy Co. recently added new coal contracts that materially increases fourth quarter 2022 through 2023 pricing and volume. As a result, the company is increasing its 2023 EBITDA guidance to $160 million.

The increased production will come from Hallador’s existing Oaktown mining complex, Hallador’s new Prosperity Surface mine near Petersburg, Indiana, and new surface production near Freelandville, Indiana. Production from both Prosperity and Freelandville are higher cost and are expected to increase cost structure to $36/ton for the fourth quarter of 2022 through 2023.

Hallador said it expects to complete its acquisition of the Merom power plant in the third quarter of 2022, subject to receiving certain governmental and financial approvals. The company said the Merom Power Plant is not expected to meaningfully contribute to EBITDA in 2022 and 2023.

The company also noted the additional coal volumes create added pressure on transportation networks and, if sales are not delivered on time, will create a lag in achieving the new EBITDA guidance.