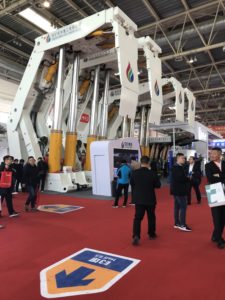 BEIJING, China—Coal mining thrives in China. This week, more than 40,000 visitors were expected to pass through the China Coal & Mining Expo, a biennial mining equipment exposition that takes place in Beijing. This year, 640 vendors packed six halls (70,000 m2) at the New China Convention Center. Two of the halls were occupied by foreign equipment and service providers and domestic suppliers filled the other four halls.

As many as six different longwall shearer loaders were visible on the show floor. Twice as many manufacturers brought roof supports (shields), with some standing 10-m tall or more. Domestic suppliers also brought roadheaders and roof-bolting machines.

The exhibition, however, was not limited to coal or underground mining. Equipment manufactures rolled out jumbo drills, tunnel boring machines and haul trucks. Several suppliers had jumbo drilling equipment with simultaneous roof bolting applications—what the coal industry refers to as the bolter-miner, but with a hard-rock twist. Technology and safety achievements were a common theme. Autonomous mining systems and machine awareness have not escaped the Chinese manufacturers. Similarly, many German and American manufacturers were on hand with their systems as well.

In addition to advanced tech, there was also some weird or questionable technology on display. Although it looked feasible on the surface in an exhibit hall setting, from an American mining engineer’s perspective, one had to wonder how the equipment would perform underground. Many of the jumbos and roadheaders sat on crawler frames there appeared to be substantial, which raises questions about the quality of the steel and the weldments and the metallurgy. Another example was a vibratory coal mining system, Jining Haizhi Electromechanical Technology exhibited both roadheader and longwall shearer loader applications where vibration would replace the rotary cutting action. In theory, it looked feasible, but one would obviously want to run it on remote control.

As much as the event is trying to branch into metal/nonmetal applications and construction (tunneling), it is still very much a coal show. With China approaching the 4-billion-ton-per-year level, it’s safe to say coal mining is alive and well in China and will continue to be so for a very long time.