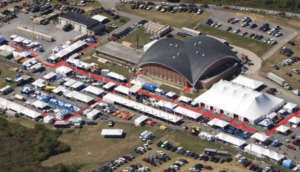 Alpha Metallurgical Resources CEO David J. Stetson will open the Bluefield Coal and Mining Show and speak at the Media and Exhibitor Appreciation Breakfast. This is the 24th biennial Bluefield show presented by the Chamber of the Two Virginias and is scheduled for September 14-16 at the Brushfork Armory Civic Center, Bluefield, West Virginia.

According to event organizers, this is the largest and premier regional coal show in the nation and expects to attract more than 6,000 attendees over three days.

“We are delighted to have the show opened by David Stetson of Alpha who will provide his unique perspective of the American coal industry when he addresses us at the breakfast,” said Bob Ramsey, president of Peters Equipment and Ramsey Industrial. “His presentation will be of great interest to everyone at a time when there is certainly a renewed focus on the industry.”

Alpha rebranded in February 2021 from its prior company name of Contura Energy and Stetson previously served on Contura Energy’s Board of Directors from November 2018 through April 2019. Before that, he served as chairman of the board of directors and chief executive officer of both ANR Inc. and Alpha Natural Resources Holdings Inc. from July 2016 until the merger with Contura in November 2018.

For further information on the show, visit www.coctwovirginias.com.