Abandoned Mine Reclamation Extension Legislation is Introduced in US House 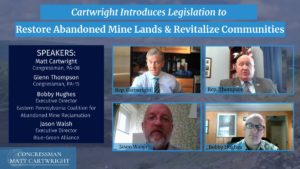 On March 10, U.S. Rep. Matt Cartwright (PA) reintroduced two pieces of legislation to reauthorize and accelerate federal funding to reclaim abandoned mine lands in northeastern Pennsylvania and across America. Rep. Cartwright said these two bills would help create good jobs, pave the way for new economic development and clean up waterways poisoned by toxic mine drainage.

He also reintroduced the Revitalizing the Economy of Coal Communities by Leveraging Local Activities and Investing More (RECLAIM) Act with U.S. Rep Hal Rogers (KY). This bill will accelerate the release of about $1 billion in funds already collected for the Abandoned Mine Land Trust Fund to provide support for economic revitalization, diversification and development in economically distressed mining communities through the reclamation and restoration of land and water resources adversely affected by coal mining. Of these funds, Pennsylvania would receive more than $300 million.

Together, the AML Reauthorization Act and RECLAIM Act unlocks, then accelerates resources to coal communities, allowing them to repurpose hazardous mining sites into opportunities for job creation and economic growth, Cartwright said.

“I’m proud to lead the charge to continue and accelerate federal investment in reclaiming abandoned mine lands in northeastern Pennsylvania and across the country,” Cartwright said. “These resources have helped our area’s environment and economy over the years, but we still have more than 300 dangerous and blighted abandoned mine sites that still need to be reclaimed.”

Thompson said, “Coal powered the United States’ rise to a global superpower, fueled victory in two World Wars and brought our nation into the modern area. Despite considerable progress on environmental restoration, the need to clear up abandoned coal mines remains.”

Thompson added that his district has the most abandoned coal mines in the nation, and felt this issue was important to the commonwealth.

“We have an excellent window of opportunity right now to reshape regional economies that will reclaim our abandoned mine lands, help to clean up our polluted waterways, and train workers who are in need of employment,” said Bobby Hughes, executive director of Eastern Pennsylvania Coalition for Abandoned Mine Reclamation (EPCAMR). “Clean energy alternative projects like the development of community solar systems, pump hydro storage, and the creation of geothermal mine pool systems to generate electricity, for example, are just a few paths forward that can allow us to capitalize on our blighted landscapes and waterways we have had to live with for decades. Transitioning from the fossil fuel industry to create job opportunities will help to restore the legacy of our country’s abandoned mines.”

The AML Trust Fund was established through the Surface Mining Control and Reclamation Act of 1977 (SMCRA) and is set to expire in September. The AML Trust Fund has helped eliminate more than 46,000 open mine portals and restored water supplies to countless residents of coalfield communities, all while creating jobs and economic opportunities. However, it is estimated that it will cost at least $10 billion to reclaim the remaining high priority AML sites across the country.