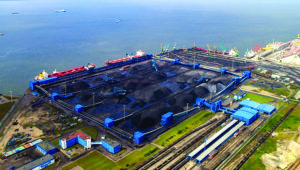 Ust-Luga loaded 1.8 million mt for export to Israel, representing a 27% year on year rise, while 1.4 million mt went to India, up by 3%.  The remainder was exported to Malaysia, China, Vietnam and South Korea.

The increase was partially due to bulging stocks at Amsterdam, Rotterdam and Antwerp (ARA) import terminals, which averaged 6.77 million mt in 2019, nearly 30% higher than in the previous year.

Just 460,00 tons were exported to Asian destinations in the last quarter, with only 70,000 tons recorded in November-December.

A coal analyst with a European utility said the decline could also have reflected cargoes being shipped to Asia via ARA terminals, so they were not initially recorded as having Pacific-basin destinations.

There was an overall decline in shipments from the port in the final months of the year, with total loadings to all destinations falling to around 52,000 tons per day (tpd) in December, from 63,000 tpd in November and 81,000 tpd in October.