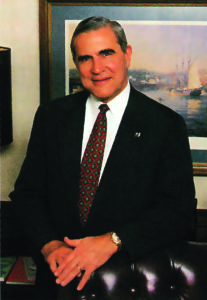 Before joining the NCA, he had a distinguished military career, retiring from the U.S. Air Force in 1986 as a four-star general and deputy commander-in-chief of the U.S. European Command in Stuttgart, Germany.

Lawson was born in Fairfield, Iowa, in 1929. He attended the University of Iowa and graduated from Parsons College in 1951 with a bachelor of science degree. He graduated from the Air Command and Staff College at Maxwell Air Force Base in 1964 and concurrently earned a master of public administration degree from The George Washington University. He completed the National War College at Fort Lesley J. McNair in 1969, and received an honorary doctorate of laws degree from Centenary College, Shreveport, Louisiana, in 1980.

While at Parsons College, he enlisted in the Iowa Army National Guard and was called to active duty as the 133rd Infantry Regiment’s sergeant major at Fort Riley, Kansas. He was commissioned a second lieutenant in November 1951 and assigned as adjutant for the 133rd Aircraft Control and Warning Squadron, Alexandria, Louisiana. In May 1952, he entered pilot training at Columbus Air Force Base, Mississippi, and completed training at Reese Air Force Base, Texas, in July 1953. He was then assigned to the 69th Bombardment Squadron at Loring Air Force Base, Maine, as a B-36 co-pilot and aide-decamp to Brigadier General Bertram C. Harrison. He accompanied General Harrison to the 72nd Bombardment Wing, Ramey Air Force Base, Puerto Rico, in July 1955. He continued to serve as aide to General Harrison and also Brigadier General H.R. Sullivan. However, his primary duty was as chief, Operations Control Division, 72nd Bombardment Wing.

He returned to the United States in June 1958 and was assigned to staff officer positions in the 5th Bombardment Wing at Travis Air Force Base, California. The general transferred to Headquarters Strategic Air Command at Offutt Air Force Base in September 1961 and served as a member of the European Force Application Team, Joint Strategic Target Planning staff. In September 1963, he entered the Air Command and Staff College. Upon graduation, he returned to SAC headquarters and was assigned as an operations planner in the Concepts Division, Operations Plans Directorate. He became chief of the Future Concepts Branch in February 1967 and entered the National War College in July 1968.

He was assigned, in July 1971, to the U.S. Air Force, Washington, D.C., in the Directorate of Operations, Office of the Deputy Chief of Staff, Plans and Operations, with duty as chief, Strategic Division. In July 1972, he was named deputy director for strategic operational forces. In February 1973, he become deputy director of operations. Appointed military assistant to the president in August 1973, he served at the White House until March 1975 when he returned to Air Force headquarters as director of plans, and remained there until June 1977. He was then assigned as commander, 8th Air Force at Barksdale Air Force Base. In July 1978, he was named director for plans and policy, J-5, Organization of the Joint Chiefs of Staff. He was assigned as the U.S. representative to the Military Committee of the North Atlantic Treaty Organization, Brussels, Belgium, in July 1980 and moved to Mons, Belgium, in July 1981 as chief of staff, Supreme Headquarters Allied Powers Europe.

He passed away following his 70th wedding anniversary in August to his wife, Joan. Services, burial and reception will be held at Arlington Cemetery within the year.

Donkin Mine Will Begin Production in 2016