Elan Project Put on Pause Thanks to Alberta Coal Policy 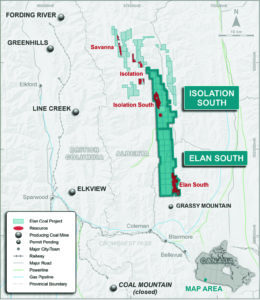 The Government of Alberta has reinstated the previously rescinded 1976 Coal Development Policy for Alberta. Atrum Coal’s Elan project for hard coking coal is located in an area designated as Category 2 land under Alberta’s Coal Development Policy. Category 2 land is not normally considered for open-cut coal mining. Any open-pit permitting approval for the Elan project under the coal policy framework requires an exemption to be granted.

Atrum said it can continue activities on the Elan project already approved under its 2020 Coal Exploration Permit (CEP). However, it has halted all site-based activities, including any planned drilling in 2021, with the exception of baseline environmental study work that is required to ensure the continuity and integrity of work done in previous years.

The decision was taken to preserve cash and allocate due focus and effort to the stakeholder consultation process, according to Managing Director and CEO Andrew Caruso.

“We look forward to the opportunity to present how modern, sustainable mining and land use practices will enable Alberta to unlock the valuable hard coking coal resource it holds at Elan while protecting its environment and waterways,” Caruso said.

The Albertan Government announced plans to consult with Albertans in formulating a new, modern coal policy. Atrum Coal said it believes this is an important and necessary step toward achieving greater certainty while also balancing and resolving the views of Albertans with respect to responsible resource development.

The minister of energy has issued a directive to the Alberta Energy regulator (AER) that no mountaintop removal will be permitted and all restrictions under the 1976 coal categories are to apply, including all restrictions on surface mining in cat 2 lands; and all future coal exploration approvals on cat 2 lands will be prohibited, pending widespread consultations on a new coal policy.

AER said it is not aware of any current or proposed projects in cat 2 lands that would involve mountain-
top removal.

There has been exemption granted in the past to allow open-pit mining on category 2 land and Atrum is looking for clarity under what conditions open-pit mining will be allowed under the new policy.

Indian Coal Production to Increase by 2016-17