Credit Agricole, for its part, told the court its agreement to provide debtor-in-possession financing to Trinity was conditioned on Stetson, employed by the coal company prior to his CRO agreement.

Samuel Crocker, the U.S. Trustee, objected to the approximately $115,000 in “additional compensation” for Stetson in his CRO role, and not covered by federal bankruptcy law. “There is no question that Mr. Stetson, as the CRO, is an insider of the debtors,” he added. “The key issue is whether these payments were made to induce him to remain as CRO,” said Crocker. “The United States Trustee believes this to be the case.”

The West Virginia Department of Environmental Protection cited concerns Trinity sought to “protect Stetson in his personal capacity from possible negative effects under the Surface Mining Control and Reclamation Act.” The U.S. Department of the Interior’s Office of Surface Mining has a role in enforcing the Act; West Virginia and Kentucky each have enforcement responsibility in their jurisdictions.

The U.S. government argued the court lacked the authority regarding mining activity in Stetson’s CRO role. “The court should not grant such protection if it does not have the authority,” said U.S. Attorney Kerry Harvey.

Trinity has 16 privately held units in eastern Kentucky and West Virginia, producing metallurgical and steam coal, which was acquired by Essar for $600 million in 2010 and currently employs 160 people. Trinity has holdings in Breathitt, Floyd, Knott, Magoffin and Perry counties in eastern Kentucky and Boone, Fayette, Mingo, McDowell and Wyoming counties in West Virginia. 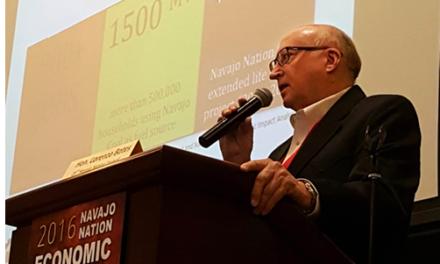 NTEC Contributes to the Navajo Nation