The coal miner’s memorial at the center of Coshocton, Ohio.

A small coal mining town in central Ohio now has a beautiful square at which to reflect on the miners who have lost their lives on the job in the region over the years, and its existence is thanks to the push of one man — himself a former miner — that wanted to honor his father and his mining brothers.

The official dedication of the Coal Miners’ Memorial at the center of Coshocton, Ohio, may have been made in October 2013, but the process to get to its unveiling — and the several brick commemoration ceremonies that have followed — was just as storied as the road its fundraiser took to get to where he is today.

At the prompting of a friend in 2008, Sam Bennett, a second-generation miner who left his post at Peabody Energy earlier in life to work in the paper industry, began the preparation process to build a miner’s memorial. An initial plan to erect the piece at the now-abandoned mine that took the life of his father, Arthur Sr., in 1971 was changed to the village’s downtown. Draft designs for a headstone-like commemoration quickly became much more when the judge tasked with approving the project requested a sitting area, lighting and a life-size miner statue.

An undeterred Bennett, eager to mark the lives of his father as well as so many others over the course of more than a century, set off to raise funds despite the much larger financial goal of about $60,000. Restaurant benefits and even door-to-door donation collections followed, along with grant funds from the Montgomery Foundation ($25,000) and the Coshocton Foundation ($2,500).

After meeting with officials at Ohio producer Oxford Resource Partners (now part of Westmoreland Coal), Bennett was given $3,000 on behalf of the company. Brothers Charles and Tom Ungurean each matched their company’s pledge for the memorial, and more than 10 others each put up $1,000 toward the total — giving the fund far more than the $60,000 originally targeted.

With final drawings, a miniature miner statue, and local government approvals in hand, local Zanesville artist Alan Cottrill got to work on the centerpiece of the memorial, the bronze statue. Bennett pointed out that every element of the design, including the stone that now marks 52 fallen miners between 1872 and 1989, was made in the United States.

The last stones making up the circular seating area were placed the night before a dedication ceremony on October 18, 2013. Bennett attended with his mother and sister, and the daughter of the most recent worker killed on the job (in 1989) also spoke in a moving tribute to her father and his hard-working fellow miners. A representative of Ohio Gov. John Kasich’s office, Tim Ross, read a proclamation, and the memorial element’s designer, Milligan Memorials, also spoke as the marker was unveiled to the public.

The fund still sells engraved bricks to be lain about the memorial, and there have been multiple dedication ceremonies in 2014 and 2015 for those as well; another has been planned for October 31.

Bennett now keeps the fund open for the maintenance of the memorial, including landscaping and the placement of additional bricks. He said the door is always open for further expansion of the site as well. Donations can be made at www.coalminersmemorialfund.org.

MEMORIAL COSTS
It took a few years to gather all of the funds needed to build the memorial. Below are a few of the costs involved, not including production labor. The miniature statue replica, produced to provide a visual of the final result, now sits at Ace Auer Hardware in downtown Coshocton.
Black Granite Stone (Monument) $16,000
Bronze Coal Miner Statue $35,000
Brick Circular Stone Patio $2,500
Landscaping and Mulch $900
Spotlights and Labor $500 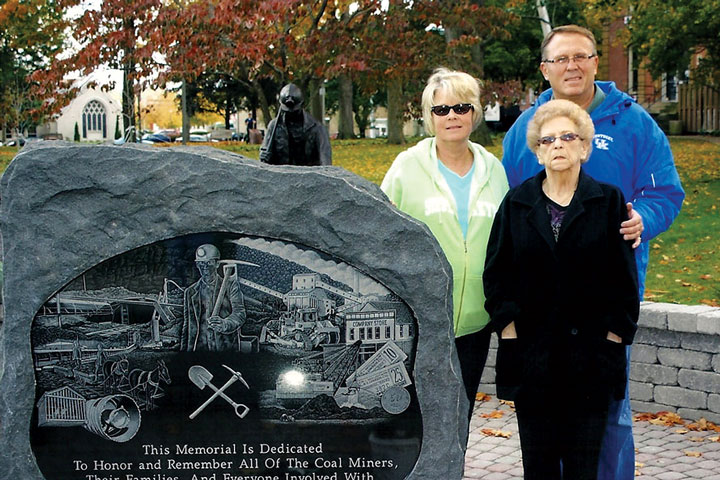 The memorial fund was organized by Arthur ‘Sam’ Bennett; he attended the unveiling with his mother Wilma and sister Debra Bennett Brown.