The voluntary filing includes a majority of the company’s U.S. entities, but not its Australian platform; all of its global locations will continue to operate normally.

What will be included in the filing is Peabody’s El Segundo and Lee Ranch mining complexes in New Mexico and the Twentymile operation in Colorado; officials said the sale to Bowie Resources Partners has now been terminated. It said only that the buyer “was unable to complete the transaction” for the assets.

Citing the industry’s prolonged downturn, Peabody officials said the Chapter 11 filing will help it reduce its overall debt level, lower its fixed charges, improve the company’s operating cash flow and position it for long-term success. It intends to continue operations throughout the bankruptcy process.

“This was a difficult decision, but it is the right path forward for Peabody. We begin today to build a highly successful global leader for tomorrow,” President and CEO Glenn Kellow said.

“Through today’s action, we will seek an in-court solution to Peabody’s substantial debt burden amid a historically challenged industry backdrop.”

Peabody has obtained $800 million in debtor-in-possession (DIP) financing, an arrangement by Citigroup that includes numerous company secured lenders and unsecured noteholders. The facilities include a $500 million term loan, a $200 million bonding accommodation facility and a cash-collateralized $100 million letter of credit facility. The financing plan was approved by the court on April 14.

“In addition to the company’s existing cash position, Peabody believes it has sufficient liquidity to operate its business worldwide post-petition and to continue the flow of goods and services to its customers in the ordinary course,” Kellow said.

The executive is also remaining positive on Peabody’s future, thanks to the company’s core mission.

“A company like Peabody with safe, efficient operations will be well positioned to serve coal demand that will continue in the United States and around the world,” he said. “We are a leading producer and reserve holder in our core regions of the Powder River Basin, Illinois Basin and Australia. Peabody has a new management team, outstanding workforce, unmatched asset base and strong underlying operational performance that represent a key driver in the company’s future success.”

He pointed out that all of its domestic operations were cash-flow positive last year, and its Australian locations exceeded earnings year-on-year in 2015 despite lower prices for coal. Its commitment to best practices and sustainability in land restoration will also continue.

Peabody has filed first-day motions with the U.S. Bankruptcy Court to continue financial operations uninterrupted, including employee wages, health care and other benefits.

Information about the claims process will be available at www.kccllc.net/Peabody. 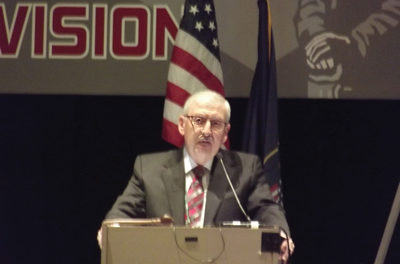 ‘Step Up, Get the Word Out’ on Coal: Benson