Illinois Basin producers supplied nearly 3.2 million tons of coal to the retiring plants through the first eight months of 2013, far exceeding the impact to Powder River Basin and Uinta Basin suppliers. The Illinois Basin, thanks to a structural decline in central Appalachia, has actually seen production increase over the past 12 months despite a weak domestic market. 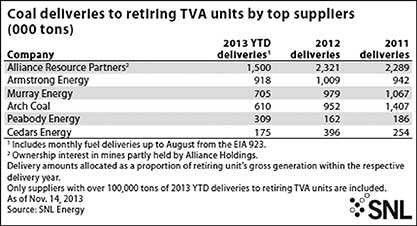 The Paradise and Widows Creek plants burn Illinois Basin coal. The Colbert units predominantly burn Colorado and Powder River Basin coal, particularly from Arch Coal’s Black Thunder mine and Peabody Energy’s North Antelope Rochelle mine. Privately held coal producer Murray Energy delivered more than 700,000 tons to the Paradise plant through August from its Paradise No. 9 mine in Muhlenberg County. A Murray official declined to comment on TVA’s announcement. Armstrong Energy President Martin Wilson said during an earnings call on November 14 that the unit retirements at Paradise were “a little bit unexpected” because units 1 and 2 are low-cost generating units.

According to TVA, Paradise units 1 and 2 will be retired after a new natural gas-fired plant to be built at the site becomes available. Wilson said TVA’s goal is to build the natural gas-fired plant by 2017. Paradise units 1 and 2 are 704 MW each, and unit 3 is 1,150.2 MW, according to SNL Energy data. Wilson said Armstrong is in position to maintain current volumes into unit 3 because of its proximity — the producer has a seven-mile private haul road directly into the plant — and because TVA was unable to reach a deal with its rail provider and will stop taking coal into Paradise by rail.

“Between now and 2017, who knows what will happen with gas prices?” Wilson said. “They will have an ability to change their mind about things. The Paradise units are very low-cost generating units in their fleet.

“Also, the gas plant has obviously got to be running to their satisfaction before they shut down those two coal units, because they’ve got to keep the generation coming out,” Wilson added. “It’s not like you build the gas plant and shut the coal plants down and say, ‘Hey, let’s fire up the gas plant and see how it works.’”

Armstrong mines shipping the most coal to the affected plants include its Parkway operation in Muhlenberg County and its Kronos mine in Ohio County, Ky.

“[Wilson] and others have done a very good job of being able to qualify ourselves at other plants in addition to Paradise, so there will be other places our coal can go in the near to intermediate term in TVA’s platform of facilities,” Armstrong Chairman and CEO J. Hord Armstrong said during the conference call.

Alliance Resource Partners LP, a significant player in the Illinois Basin, is absorbing the largest hit from the retirements based on current coal deliveries to the impacted plants.