One of West Virginia’s Greatest Sons 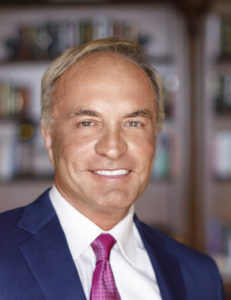 This is the eulogy Brian Glasser delivered for Chris Cline at the Raleigh County Armory in Beckley, West Virginia, on July 12. He was Cline’s personal lawyer for 20 years and the family asked him to speak about Chris Cline, the businessman.

How many people were inspired by Chris, or felt the presence of and connection to Chris, one of West Virginia’s greatest sons. We are here all sharing a loss. Today, we feel a community of loss.

Chris Cline brought us together in this moment; in this place. It is impossible not to be touched by a flame that hot. First you see the bright light, and then you feel the heat. It is impossible not to be inspired by that. The man was a human being. He was part of the crooked timber of humanity. He had his excellences, and his fatal flaws. But the idea of Chris is so inspiring because he rose from such an improbable starting point, from Isaban, West Virginia, to the absolute pinnacle of business success.

I am honored to have this chance to talk with you about the man I came to know and in an odd, and complicated fashion, even love. It’s a big story, too wild and mixed up to really tell in the short time we have. He was too complex a personality to pack into 10 minutes. But I can give you glimpses of the man as he hurtled through my world for the last twenty years.

Chris was so focused, so driven, that it was hard to keep up. He was relentless. It is almost impossible for people outside the close circle of friends and management to even understand the level of intensity I am describing. He was like a supernova. If you couldn’t keep up with that explosion, it would burn you out.  If you could, it helped drive you to sail to almost unimaginable results. You would push yourself beyond what you thought was possible, and find unique solutions to all sorts of problems.

The purest business expression of this intensity was evident in the buildout of Foresight Energy from 2006 to 2013. In seven years, Chris and his Foresight team permitted, designed, built and constructed six giant mines, over 100 miles of railroad, a coal export terminal, a river dock, and a high speed barge transloading facility, all as a private company. Four of those mines were the most productive coal mines on the planet. To put that in perspective, most public mining companies develop a new mine once a decade. Most developers can handle one project at a time. Chris Cline was able to dial up the intensity and compress time so that all this happened all at once.

His ability to accomplish that monumental task came from a lifetime of knowledge — starting from his time as a teen-aged miner until today. He possessed a unique set of skills that very few possess. He could look at an empty cornfield and know exactly what he was going to build and how. And even fewer have the vision, drive and pure willpower to take that knowledge and turn it into an industrial reality of these grand proportions.

Second, Chris Cline respected hard work. He respected the miners. He respected the miners because he was a miner. On the way up, he, himself, did every dirty, dangerous, backbreaking, courageous job a miner could do. He was proud to be a coal miner. He always treated these proud men and women with ultimate respect. In turn, and based on this trust, they built the greatest mines in the world.

He had respect for the worker, and respect for their work. He celebrated their individual and group achievement at every turn. His lowest moments came when something went wrong. I personally witnessed how hard he personally took every accident, every injury. He understood, and shared at the most basic level, the physical courage it takes to mine coal.

Third — and I cannot stress how important, how crucial, and how rare this is — Chris was willing to fail. When he made a bet, he knew the chips might get raked to the other side of the table. Failure in his organization was acceptable. We tried, and failed, to build coal gasifiers in Illinois.  We tried, and failed, to build an iron ore mine in Wisconsin. We tried, and failed, to expand into Australia. There were plenty of things that didn’t work as well as designed, strategies that we had that unraveled, situations that needed to be fixed. Vast piles of money and time, vaporized. But that was just a part of it all. Chris never wallowed in a failure, he just kept his hands on the wheel, foot on the accelerator, eyes pointed down the road.

Our successes dwarfed our failures because momentum solves lots of business problems. He taught me a crucial business lesson:  it is often far better to decide something, than to decide something right. We can always adjust downfield, but let’s get down the field. Standing at the starting line fiddling with our gear was not acceptable. He was always building, always accelerating, always intensifying.

Last, he valued the help and expertise of others. Chris Cline was never an island, and he knew it. He was grateful to a long line of people who helped him make it to the pinnacle. A helping hand from Leo Vecellio Sr. Good advice from Buck Harless. The strength of Andy Fox, in an hour of need. The handshake deal he cut with Jim Bunn Sr., that helped save his companies in 2002, when in the immortal words of Donnie Holcomb “we were so broke we were eating the paste from the windows.” The extraordinarily talented miners, without whom nothing would have been possible: Steve Houchins, Pete Hendrick, Barry Hale, Drexel Short, Dwayne Francisco and Anthony Webb. The crucial business partners: Bartow Jones and Nick Carter. The straight-shooting honesty of Rob Moore, under pressure. The advisors who passed through at critical moments: Matt Fifield, Paul Vining, Trey Jackson The people in his immediate orbit who have remained essentially the same for the last twenty years:  John Dickinson, Donnie Holcomb, Tim Elliott, Mike Beyer, Lesslie Ray, Rob Boyd and David Jude.

Let me tell you about David Jude. At the end of the day, when Chris had all the advice from all his advisors, he would run it by his friend David Jude, a man he trusted above all others. And, David Jude’s contribution to Chris Cline, the businessman, should never be overlooked. None of what Chris accomplished might have happened without each of those people. None of it.

As I look back on the rocket ride of the last 20 years, I could find you one or more instances where the contribution of each person I just named was absolutely crucial in some respect to what Chris accomplished. This takes nothing away from Chris. It is instead a testament to his intelligence and his willingness to combine his immense talent and vision with other talents to accomplish his goals.

I also want to say a word here about Tanner Cline.  For the last three years Tanner has been immersed in this business, tailing Chris, advising Chris, learning from Chris, I can tell you that this process of passing on what he knew, how he worked, and his vision, was a source of incredible happiness and pride to Chris.

For all you I just named, and for the dozens and dozens more out here in the crowd, who worked with Chris all these years, you know there will never be another boss, partner or counterparty like Chris Cline. The clay mold lies shattered on the floor. And, I see his soul: outlined in the white light of a supernova, hard hat in hand, walking toward the slope.