The final rule indicates a 25% reduction in permitted levels of breathable coal dust to 2 from 1.5 milligrams per cubic meter of air. This also halves the standard to 0.5 from 1 for certain mine entries and miners with pneumoconiosis. Dust samples, meanwhile, will now be mandated whenever mines operate at 80% of production — up from 50%; the new level, MSHA officials said, is “more representative of actual working conditions.”

“You shouldn’t have to sacrifice your life for your livelihood,” said U.S. Labor Secretary Thomas Perez, citing 1969’s Coal Act. “We can have both healthy miners and a thriving coal industry — we’re making good on that promise.” MSHA first proposed a rule in Q3 2010, and prior to seven public hearings, before extending the comment period three times and receiving 2,000 pages of feedback from industry and broad number of stakeholders.

Measurement in terms of readings and averages will also be enhanced — along with thorough on-shift examinations of dust controls and verifiable controls through a written certification. Additionally, immediate action will be required if dust levels are high, MSHA said.

Current exposure levels are largely determined via sampling to be increased under the new rule — in particular, near high dust level areas, such as those closest to the production operations.

In an April 24 public hearing in Morgantown, W.Va., officials said black lung prevalence dipped between the 1970s and 1990s, but voiced concern about current recorded increases of other lung diseases including emphysema and progressive and massive fibrosis.

According to estimates, some 76,000 miners died since 1968 from black lung; coal miners disabled by the illness and their survivors have received more than $45 billion in federal compensation. Miners, noted officials are, still persistently being diagnosed with the disease.

In addition to a headquarters office meeting April held 24 in Arlington, Va., MSHA will visit Beaver, W.Va.’s National Mine Health and Safety Academy on May 8; Hazard, Ky., on May 20; Washington, Pa., on May 22;  Evansville, In., May 29; Birmingham, Al., June 3; Grand Junction, Co., June 5. http://www.msha.gov/endblacklung/

Mine Inspector Pleads Guilty to Bribery 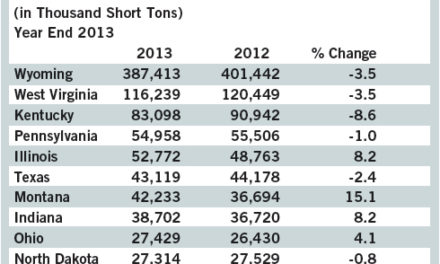