At the request of the unidentified customer earlier this year, Hallador agreed to defer 571,000 tons produced by its Sunrise Coal subsidiary from 2015 to 2016. As an incentive to revise the accord, the customer offered to award an unspecified amount of additional tons to Hallador in the 2016-2020 time frame.

As a result, Hallador previously reported it had a maximum of 6.4 million tons priced for 2016. But after the customer again contacted Hallador on November 16, Hallador reduced the amount of coal it has priced for next year to about 5.8 million tons.

“Negotiations are still ongoing,” Hallador said in a late November filing with the federal Securities and Exchange Commission. “Until a contract is finalized, we feel it is prudent to revise our contracted sales position.”

Over the next five years, Bilsland said, Hallador has a minimum of 22 million tons and a maximum of 30 million tons already contracted.

In recent months, Hallador has consolidated most of its production at Sunrise’s two Oaktown underground mines in Knox County, Indiana. The continuous miner operations were opened a few years ago by Vectren Fuels Corp., a subsidiary of Evansville, Indiana-based Vectren Corp. Hallador acquired the two mines in 2014.

Because they are newer and more modern mines, Hallador said the Oaktown complex can produce coal at a lower cost — less than $30/ton — than its original Carlisle deep mine in Sullivan County, Indiana, that opened nearly a decade ago. Once a consistent 3-million-tons-per-year producer, Carlisle has been drastically downsized and is expected to turn out only about 150,000 tons in 2016.

Sunrise continues to produce lower-sulfur coal at its Ace in the Hole surface mine in Clay County, Indiana. The company blends coal from Ace with higher-sulfur coal from Oaktown to meet the demands of several Florida utilities. 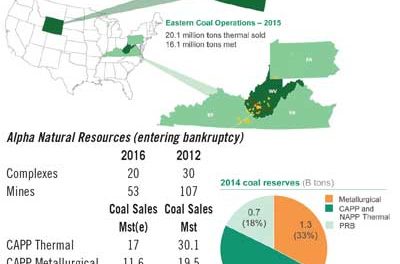