Company officials said the plan, for which documentation is now being finalized, would be effective upon its completion of the bankruptcy case. As part of that, the court has also approved the sale of several assets to the new company, Contura, made up of Alpha’s first lien lenders.

The assets include the Eagle Butte and Belle Ayr operations in Wyoming, the Nicholas, McClure and Toms Creek complexes in West Virginia and Virginia, all of the company’s Pennsylvania coal operations and certain reserves and the company’s interest in the Dominion Terminal Associates coal export terminal in Newport News, Virginia. Some other assets, including working capital, are also tied into the sale.

Contura, then, will provide contingent credit support for the reorganized producer going forward; the $35 million aggregate amount will be available from Alpha’s effective emergence date through September 2018. In the coming decade, the new group will also contribute up to $100 million for restricted cash accounts to aid the new Alpha in its ongoing reclamation efforts.

“Confirmation of Alpha’s plan represents the final court milestone in a complex, one-year restructuring process,” Alpha Chairman and CEO Kevin Crutchfield said. “We appreciate the commitment of our workforce, the trust of our customers, and the ultimate support of our creditors and broader stakeholders in helping to pave the way for Alpha’s successful emergence as a more streamlined, financially secure company with attractive prospects for the future.

Once it exits bankruptcy, Virginia-based Alpha — which first filed its voluntary Chapter 11 petitions in August 2015 — will likely be operated as a privately held company.

Shortly after the approval announcement, the United Mine Workers of America (UMWA) said it had reached a tentative labor deal with both Contura and Alpha.

“This has been a long and difficult set of negotiations,” UMWA International President Cecil Roberts said. “It is never easy bargaining with a company in bankruptcy, especially one that has a judge’s order in its back pocket that eliminates the existing agreement, wipes out retiree health care and ends pension contributions.”

He noted that Alpha is the last of three coal companies that filed for Chapter 11 last year to emerge on their other side of their cases.

“We sincerely hope there will be no more. Workers always come last in bankruptcy proceedings and retirees suffer significant loss.” 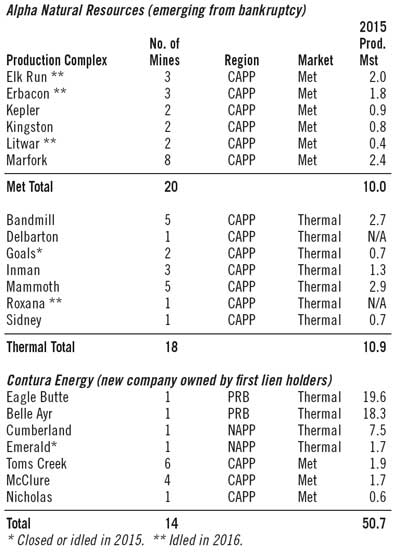 The agreement, valued at more than $325 million, will set up the path to bond and reclaim all of Alpha’s legacy liability sites in West Virginia along with its continuing operations in the state.

Kevin W. Barrett, a partner of the Bailey & Glasser law firm and special assistant attorney general for West Virginia, called the agreement “groundbreaking” as it marks the first time a large coal company has committed to remain in active business while also continuing to operate for the primary purpose of reclaiming legacy mining sites.

“Under the agreement, the surety bonds Alpha previously posted to obtain its mining permits will remain fully in place,” he said. “But Alpha, West Virginia’s last remaining self-bonded coal company, will post an additional $100 million in surety and other forms of bonds to replace all of the self-bonds at its active and inactive mining sites in West Virginia.”

Additionally, he said, Alpha will also immediately post $39 million in credit letters or cash bond assurances that it will perform its reclamation and water treatment obligations at other remaining self-bonded West Virginia sites.

“Alpha has committed, moreover, to post bonds for, and reclaim and treat water at, all its remaining mining sites, including sites in other states and sites at which it has ceased mining operations, over time,” Barrett said.

Westmoreland to Acquire Kemmerer Mine