In addition to the planned shutdown of five power plants in three states, Columbus, Ohio-based AEP’s compliance plan calls for the upgrade or installation of new advanced emissions reduction equipment on another 10,100 megawatts, refueling 1,070 mw of coal generation as 932 megawatts of natural gas capacity, and building 1,220 megawatts of new gas-fired generation. The cost of the plan could range from $6 billion to $8 billion in capital investment through the end of the decade, an expense that would be borne by many of the company’s 5 million customers in the 11 states where AEP operates.

Two coal-fired generating units at AEP’s 935-mw plant in Oolagah, Okla., would be idled for a year or more while emission reduction equipment is installed. Both units would be taken out of service January 1, 2016. One unit would resume operation by December 31, 2016, with the other coming back on line by December 31, 2017.

AEP spokeswoman Terri Flora said the company knows it must retire some of the units. “The timeline is the thing. What we’re arguing is does it have to be done so quickly that it negatively impacts the economy and the communities where the plants are located?”

The company contends more time is needed to allow for a more orderly, less disruptive transition process. “Some of these retirement dates are being moved up five years” because of current EPA deadlines, she said. “It doesn’t leave local officials time to adjust. We also have responsibilities to these communities in addition to the environment.” AEP would like the deadlines to be moved back until 2018 or 2020.

Although some jobs would be created from the installation of emissions reduction equipment, AEP expects a net loss of approximately 600 power plant jobs with annual wages totaling approximately $40 million as a result of meeting the EPA rules.

“We are deeply concerned about the impact of the proposed regulations on our customers and local economies,” said Michael Morris, chairman and CEO, AEP. “Communities that have depended on these plants to provide good jobs and support local services will face significant reductions in payroll and property taxes in a very short period of time.”

Transmission system reliability, particularly in the Midwest, could be affected as well, he said. “The proposed timelines for compliance aren’t adequate for construction of significant retrofits or replacement generation, so many coal-fired plants would be prematurely retired or idled in just a few years.”

During the past two decades, AEP said it has invested more than $7.2 billion to cut emissions from its nearly 25,000-mw generation fleet. Coal accounts for 65% of the company’s approximately 38,000-mw generation portfolio. 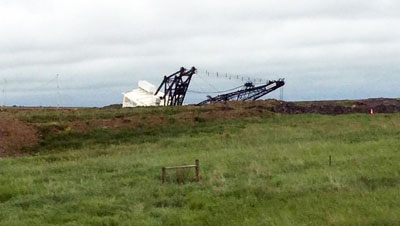