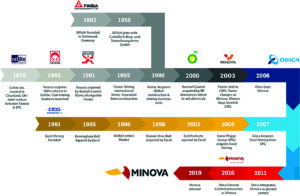 The only constant is change and the ownership of Minova will change hands again.

Melbourne, Australia-based Orica has entered into an agreement to sell its Minova business to Aurelius Group, a European based investment firm, for A$180 million ($128 million), subject to transaction costs and customary completion adjustments.

Orica made an announcement in May 2021 about its intentions to pursue a sale, and a global sale process subsequently was undertaken by Orica and its advisors.

“The sale of Minova is consistent with our refreshed strategy, which identified Minova as non-core to Orica,” Orica Managing Director and CEO Sanjeev Gandhi said. “This allows us to focus on our four key business verticals of growth — mining; quarry and construction; digital; and mining chemicals.  The Minova business will benefit from new ownership with more focus and capital to support its growth.”

The resin cartridges that Minova produces were originally introduced to the market as Celtite through a joint venture between Celtite Inc. and Foseco in 1970. In 1988, Foseco acquired Celtite before being acquired itself by Burmah Castrol in 1991. The company’s name was changed to Fosroc and in 1995, Burmah Castrol created Fosroc Mining International. BP acquired Burmah Castrol and in 2003, it sold Fosroc to CBP Capital, who changed the name to Minova. Orica bought Minova in 2006.

The transaction is expected to close in the first quarter of 2022 subject to regulatory approvals and other customary closing conditions.